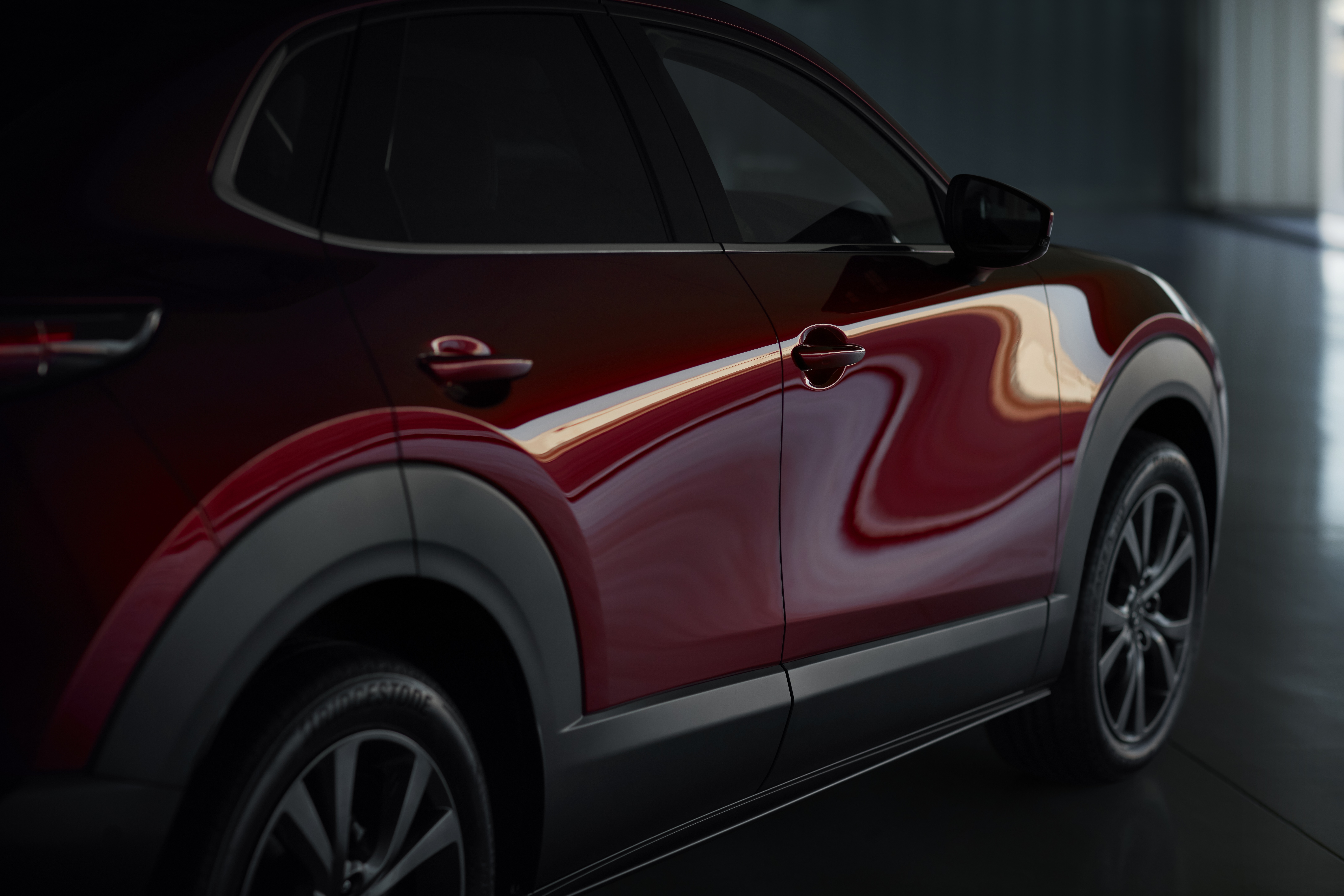 With the “Kodo – Soul of Motion” design philosophy, Head Designer Ikuo Maeda set a bold new direction for design at Mazda. Introduced ten years ago at the 2010 LA Motor Show with the Shinari concept car, Kodo Design has been defining and elevating Mazda’s award-winning styling ever since, with its core principle remaining unchanged: to explore the powerful and irresistible beauty of natural movement in a still object.

The word Kodo literally translates as “heartbeat”, but with the added meaning of filling something with life; of giving it a soul. This idea is central to the way Mazda has always thought about design: “In Japan, we feel that craftsmen inject life into what they make. We believe that a form sincerely and painstakingly made by human hands gets a soul,” Ikuo Maeda explains. Therefore, “Soul of Motion” takes on a double meaning, expressing both the essence of motion and the “soul” imbued in the car by Mazda’s master craftsmen.

Kodo was first unveiled in 2010 with Shinari, Mazda’s stunning four-door sports coupe concept which gave the world vision of an animal ready to pounce, foreshadowing an exciting future for Mazda design. The following year, Mazda teased the world with another example of Kodo Design with Minagi, a compact crossover SUV concept which later evolved into the award-winning Mazda CX-5.

Inspired by the beauty and power of nature allied with the emotion of motion, the first Kodo Designs were strongly inspired by the image of a cheetah about to pounce. Mazda designers closely observed how these powerful mammals used their entire body as a spring to convert pent-up energy into highly controlled motion. Launched in 2012, the Mazda CX-5 was the first production vehicle to embody Kodo Design, combining go-anywhere muscularity, hold-all functionality and appealing dynamism in equal measure.

Following closely in the footsteps of the Shinari and Minagi concepts, the Takeri and Hazumi concepts carried the same expression of motion that focused on the strength, beauty and tension found in the instantaneous movement seen in animals. The Mazda Takeri offered a new level of strength and allure to the future of Mazda’s saloon styling, while the Hazumi concept (meaning to ‘bound’ or ‘spring up’ in Japanese) used Kodo Design to characterise the personality of a small but vigorous animal bursting with energy for Mazda’s next generation B-segment car.

A turning point for Kodo Design was reached with the two awe-inspiring concept cars, RX-Vision and Vision Coupe, evoking a powerful and emotional design with as few elements as possible. Introduced at the 2015 and 2017 Tokyo Motor Show respectively, both concepts anticipated the new elegance and yet more pronounced minimalist aesthetic of recent interpretations of Kodo Design. Dynamic and emotional forms are achieved by shaving off any unnecessary elements to bring out the very essence of beauty and motion.

From this point onwards, Mazda designers sought to create beauty and a unique elegance through taking components away, not adding more. Launched in 2019, the latest generation Mazda3 was inspired by the Kai Concept and was the first vehicle to showcase the latest evolution in the company’s ground-breaking Kodo Design – a more mature rendition targeting greater styling prestige through the elegance and rigor of a minimalist, less-is-more aesthetic inspired by the purest traditions of Japanese art and the beauty of space between objects.

With the latest evolution of Kodo Design every element serves a purpose, nothing is superfluous or purely ornamental. Three concepts were instrumental in this design progression: Yohaku or ma, the beauty of empty space, sori, or curves with poise and balance, and utsoroi, the play of light and shadow. For example, by eliminating character lines, an empty space is created on the vehicle’s smooth side panels and functions as a blank, endlessly changing canvas for the play of light and shadow. As the vehicle moves through space, the change of light and shade creates a dynamic and fluid aspect – the “Soul of Motion” played out on the side of the car.

Only through hundreds of hours of painstaking clay sculpting and painting work has it been possible to hone the Mazda3’s unique design that creates subtle undulations of light and shadows gliding over the car’s smooth body, giving birth to a natural and powerful expression of vitality. Creating such controlled vitality –  a form both beautiful and simple – requires immense degrees of time, discipline and craftsmanship. Yet it is fundamental to the uniquely Japanese elegance of Mazda’s next-generation design vision,

The Mazda CX-30 was developed to follow this design concept with exterior styling that exudes the supple and flowing elegance of a coupe combined with the toughness of an SUV. While retaining the vitality of Kodo Design and following a new ‘Charge and Release’ design expression inspired by the brushwork used in Japanese calligraphy, the Mazda CX-30 achieves styling with both the beauty of a work of art and a powerful sense of dynamism. In particular, Sori is clearly embodied in the arc of the shoulder running from the front wing to the rear wheel, giving a sense of speed and vitality. Utsuroi may be seen in the body surfaces beneath the shoulder line, which reflect the surroundings in a distinctive ‘S’ shape that changes as the car moves.

The most recent addition to Mazda’s current global line-up, the Mazda MX-30, breaks new ground for Kodo Design. Though retaining the beautiful, hand-crafted forms of Mazda’s design philosophy, the styling of the Mazda MX-30 represents an exploration of a more modern aesthetic which focuses on the futuristic values and lifestyles that are beginning to emerge. While other Kodo models focussed on surface reflections, Mazda’s first fully-electric vehicle expresses Kodo Design in a more utilitarian way. The exterior is uncompromisingly simple to emphasise its beauty as a solid mass, and the cabin design – with its framed top and freestyle doors – embodies an image of lightness while proactively incorporating sustainability as an element for the interior materials.

Since its inception ten years ago, Mazda’s Kodo Design philosophy has been the driving force behind multiple award-winning styling across the world. Both the RX-Vision and the Vision Coupe have being named the “Most Beautiful Concept Car of the Year” and the revamped Mazda MX-5 won the “World Car Design Award” in 2015. More recently, the Mazda CX-30 and the new MX-30 have won a Red Dot Award 2020 in the “Product Design” category, while the Mazda3 was named World Car Design of the year in the distinguished 2020 World Car Awards.

Adding to an impressive roster of prestigious global design awards, Ikuo Maeda also received the Design Hero accolade earlier this year by Britain’s oldest and most established motoring title in the 2020 Autocar Awards. The latest appreciation from Autocar acknowledges Maeda’s 35 years of success at Mazda and his vision and leadership in the creation and evolution of Mazda’s Kodo Design philosophy.

Over the last ten years, Kodo Design has not just been confined to automotive design. In order to fulfil the promise of creating designs with a soul, the design team set up a process that combines creativity, craftsmanship and cooperation to explore the boundaries of Kodo Design. Mazda designers are encouraged to create their own pieces of art inspired by the principles of Kodo Design with the aim of infusing the vitality of living creatures into simple household objects. In the past, the Mazda Design team has created unique handcrafted Kodo-inspired objects including an award-winning perfume, dress, bowl, knife and futuristic Kodo chair which exuded motion with a ready-to-pounce forward-leaning stance.

Unveiled at the 2015 Milan Design Week and leaving a lasting impression on visitors, the unique Bike by Kodo Concept exemplified the ‘less is more’ philosophy of Japanese art and design to reimagine the modern racing bicycle. Mazda craftsman distilled its frame’s design to its purest form evoking lightness, agility and speed. Similarly, the Sofa by KODO Concept employed the same premise, conceptualising the intrinsic beauty found in the ideal balance between form and function.

As Mazda continues to blend a love of driving with great interior and exterior design, the simplistic elegance and emotional appeal of Kodo Design will remain essential ingredients of the brand’s identity. After ten years of sustained success, Kodo Design continues to push the limits of car design and define the future of Mazda.