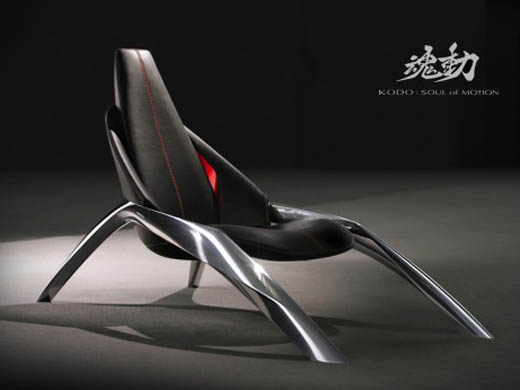 Mazda seized the opportunity presented by Milan Design Week to demonstrate its passion for beauty, as mirrored in the award-winning ‘KODO – Soul of Motion’ design theme of its new generation of cars.  Mazda’s global head of design, Ikuo Maeda, joined two of his regional colleagues in Italy for the event to share inspiration with artists and creative professionals from across the globe, and he brought along a convention-defying creation of his own.

KODO was naturally the theme of the object designed by Maeda and his team in Hiroshima, and unveiled in Milan.  Peter Birtwhistle and Derek Jenkins, respectively Mazda’s European and North American design chiefs, joined Maeda for the reveal.

Rather than an automobile, the object was a provocative piece of furniture: the KODO Chair.  Despite being a stationary object, the futuristic KODO Chair clearly exudes motion. Painstakingly crafted, there are distinct parallels between the chair and Mazda models incorporating KODO design, such as the ready-to-pounce, forward-leaning stance conveying the sudden release of pent-up energy.  There is also a beauty and precision in the chair and Mazda’s vehicles that KODO’s designers see as capturing the true spirit of Japan.

“Mazda is addressing a broader world at Milan Design Week.  We’re here to share our creative vision, expand our horizons, and be inspired in such a stimulating environment and, I hope, we will inspire others,” says Maeda, who was in charge of KODO’s development.  “We believe the approach we’ve taken with the new KODO Chair could influence our future car designs. Our attitude is to accept any challenge if we believe we can create something unique. This is the way to develop a Mazda vehicle.”

The KODO Chair is, in fact, very relevant in several ways. Beyond embodying the motion and artistry captured by KODO, the chair is also a perfect fit for the ‘Salone Internazionale del Mobile’ – the world’s leading furniture fair and the largest single attraction during Milan Design Week.

The KODO chair was unveiled at the Mazda Con-Temporary Space (MACS), a special venue set up by Mazda in Milan’s fashionable Zona Tortona district for the company’s design week festivities.  Conceived around the themes ‘movement’ and ‘soul of motion’, MACS features the all-new Mazda6, with its stunning KODO lines, as well as a unique exhibit by Giuliana Cunéaz, an Italian artist whose vision in many ways reflects Mazda’s approach to design.

Created by Cunéaz especially for MACS, the exhibition Forma Fluens expresses motion using 3D and HD video installations along with painted screens, sculptures, photographs and drawings to take the observer on a captivating journey through a virtual metamorphic landscape exploring nanotechnology and other forms of science.  Forma Fluens can be viewed at MACS until 14 April.

The design theme for Mazda’s new model generation, ‘KODO – Soul of Motion’ was inspired by the movements of animals in the wild. Bursting with energy and emotion, KODO exemplifies Mazda’s devotion to building stunningly fashioned, convention-defying yet highly efficient driver-oriented vehicles.

The all-new Mazda6, the second KODO production model, recently won the renowned ‘red dot award: product design 2013’, giving it the right to wear the internationally-acclaimed ‘red dot’ seal.  New Mazda6 was also one of three finalists for the 2013 World Car Design of the Year.  Other honours to date for KODO include Auto Bild’s 2012 European Design Award for the Mazda CX-5 compact SUV, the first KODO model.  The Mazda Takeri, which served as the basis for the all-new Mazda6, also took first place at the German Design Council’s Automotive Brand Contest 2012 in the concept car category.

Milan Design Week gives artists, companies and other organisations a prime opportunity to present design work and installations at locations of their choice throughout the city.  It evolved out of the Salone del Mobile, a furniture fair held annually since 1961. The largest event of its kind in the world, the Salone currently attracts some 2,500 exhibitors and around 300,000 visitors to the Fiera Milano exhibition grounds. This year’s Salone del Mobile and Milan Design Week run until 14 April.