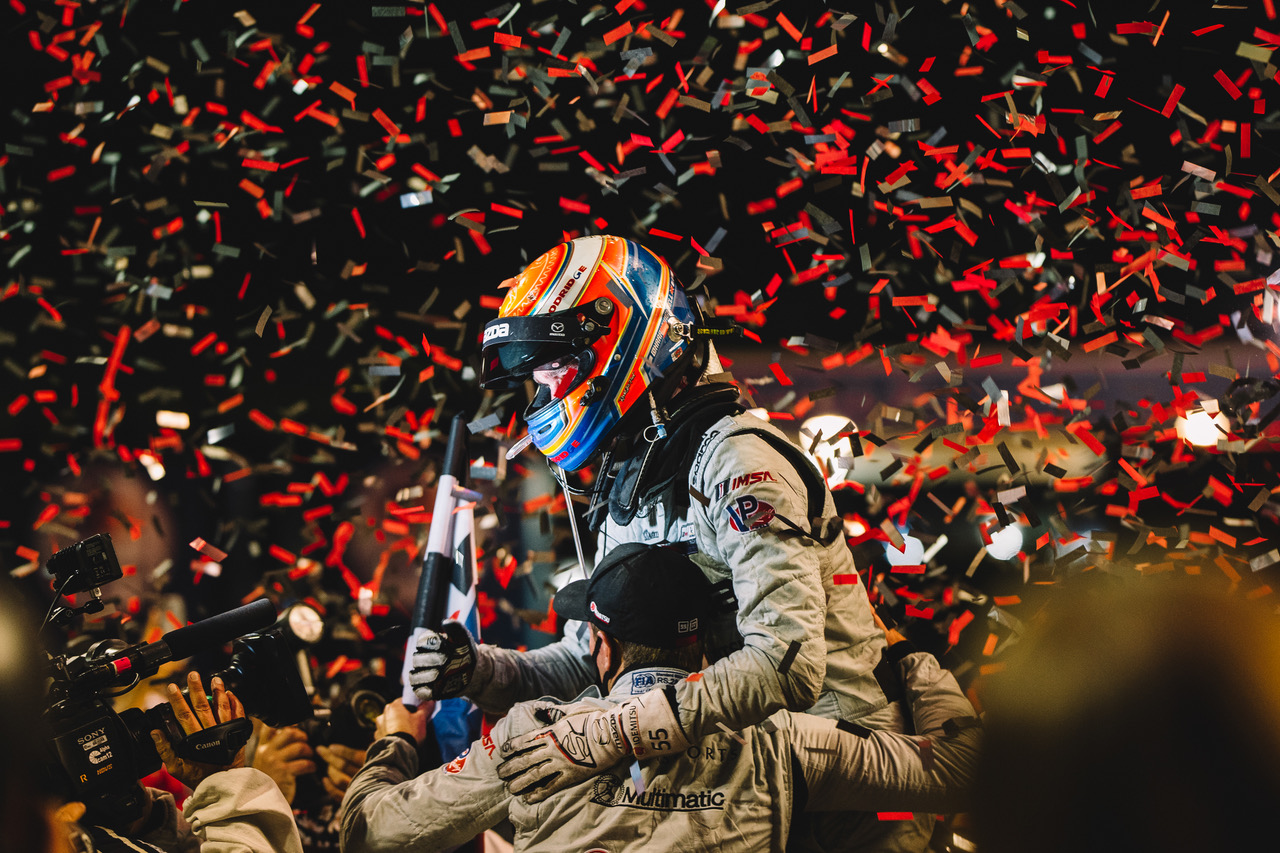 Mazda Motorsport ended the 2020 IMSA Sportscar Championship in style with overall victory in the Sebring 12 Hours. Delayed from its traditional March date due to the Covid-19 pandemic, the world-famous once-round the clock endurance race at Sebring ranks alongside the Le Mans 24 Hours and the Daytona 24 Hours as one of sportscar racing’s ‘big three’.

Mazda’s first overall victory in the Sebring 12 Hours, adds another blue-ribbon sportscar racing accolade to the famous 1991 triumph at Le Mans. In a race filled with drama and chaos, the pair of Mazda RT24-Ps ran a calm and considered strategy, with great work by the drivers and perfect pitstop execution meaning they entered the final 40 minutes of the race running in first and second, comfortably clear of the competition.

However cruel luck hit the number 77 car, which with just 30 minutes to go was forced to pit with a puncture denying British driver Oliver Jarvis what could have been his second overall Sebring 12 Hours victory. This heartbreak for Oliver and his teammates Olivier Pla and Tristan Nunez put paid to a dominate Mazda one/two result. Fortunately, the number 55 Mazda of Harry Tincknell, Jonathan Bomarito and Ryan Hunter-Reay crossed the line ten seconds clear of the number six Penske Acura, to take an historic victory, with the number 77 crew recovering to take the final step on the podium in third place. Victory at Sebring secured the number 55 car third place in the driver’s and team’s championship, bringing to a close a successful season for the Multimatic run Mazda team.

Commenting on the victory, Vice President of Multimatic SVO, Larry Holt said: “this is a truly spectacular result for Mazda, although only half the length of Daytona or Le Mans, I consider Sebring to be way tougher in terms of an actual test of endurance. The bumpy nature of the circuit puts inputs into the car that you don’t see anywhere else and it truly tests the car and driver to the limit”.

The Mazda pair really came into their own as night fell in central Florida with the drivers keeping to the run plan and quietly climbing up the order. With two and a half hours to go Olivier Pla had taken the lead in the 77 car with IndyCar star Ryan Hunter-Reay running strongly in second. With British drivers Jarvis and Tincknell taking over the cars for the run to the flag, it looked like an historic one-two for Mazda was in order, until that late race puncture denied Jarvis victory. On the flip side, Harry Tincknell’ s victory at Sebring was his first overall victory in this legendary race and adds to his class wins at Le Mans in both LMP2 and GT categories.

“Our strategy was to just get to the 10th hour without any trouble and be in the fight at the end. I was pushing like crazy on those last two stints to catch the number 77 car. I got in the car in second place, 25 seconds down and at that point was thinking a 1-2 would be great and then I heard the news that Oliver had a puncture, I feel for those guys; it’s tough and I’ve been in that situation before, commented Harry Tincknell.

Adding, “I thought I was going to have a fun cruise to the win as we were 28 seconds ahead of the Acura, but then the yellow flags came out and I’m sat behind the safety car thinking ‘this is what you dream of’ 20-minutes to go, leading one of the biggest races in the world, so I told myself to just give it everything. At the end when we needed it, we had great pace, this is such a huge result for the team and Mazda”.

The Sebring 12 Hours brings the 2020 IMSA season to a close, but the great news for British sportscar racing fans is that Oliver Jarvis and Harry Tincknell will be returning to the series next year, this time driving in the same car, as Mazda runs just one car in the 2021 campaign. With the season due to start in January next year with the Daytona 24 Hours, where Oliver and Harry will be joined by Jonathan Bomarito and Tristan Nunez, the British pair will be hoping for a run at the championship title with their full-season campaign.