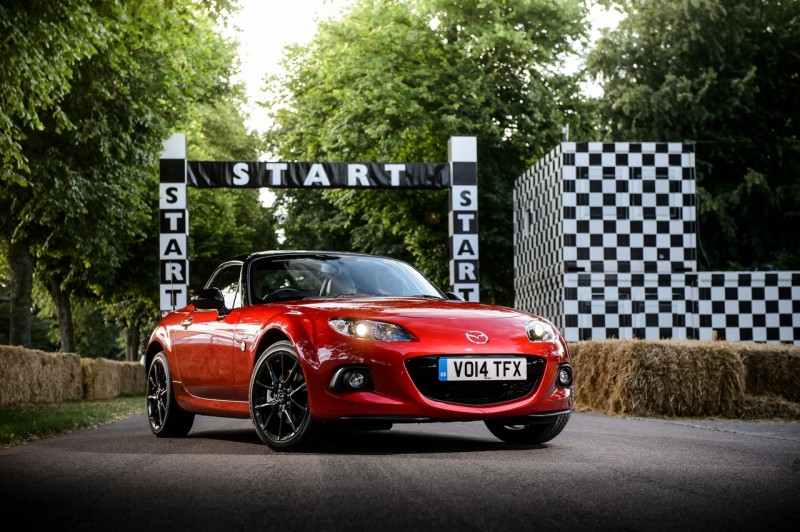 “We can think of no better way to celebrate the 25th anniversary of our evergreen Mazda MX-5 than with an unveiling in its honour at the Goodwood Festival of Speed,” said Jeremy Thomson, Managing Director, Mazda UK. “The Mazda MX-5 was created for precisely the sort of motoring enthusiasts who throng to the Festival in their thousands each year -people who just love cars, and just love to drive.”

In celebration of the 25th anniversary of its iconic two-seater roadster, the MX-5, Mazda this year makes a welcome return to the Goodwood Festival of Speed, which runs from Thursday 26th to Sunday 29th June, and not in its usual guise.

In the spirit of defy convention Mazda represents its strongest Festival presence yet, by having two stands at this year’s motoring extravaganza: a main stand, and a second, Mazda MX-5-specific stand close to Goodwood House in honour of 25 years of the MX-5 globally and the unveiling of the MX-5 25th Anniversary Limited Edition.

Just 750 examples of the Mazda MX-5 Roadster Coupe 2.0i 25th Anniversary Limited Edition will be available to UK customers from August this year and an on-the-road price of only £22,995 represents exceptionally good value for an individually numbered, limited edition model.

A Mazda6, a Mazda CX-5 and several Mazda MX-5s will star in Goodwood’s unique Moving Motor Show on Thursday 26th, and a Mazda RX-7 rally car will be storming up the famous hill throughout the Festival of Speed weekend.

A striking pavilion design statement, the main Mazda stand will feature the Hazumi B-segment concept car (the basis for the all-new Mazda2), the all-new, sixth generation Mazda3, Mazda6 and Mazda CX-5, and several displays of Mazda’s performance- and economy-enhancing SKYACTIV technology, including diesel and petrol engines and both manual and automatic transmissions.

Mazda’s burgeoning motorsport pedigree will also be showcased in the form of the MX-5 production race car which contested most recently in the Birkett 6-hour Relay Race and the Britcar Production Sportscar Series.

The Mazda MX-5 itself will be represented by both a Sport Venture special edition model and a pair of roadsters in which visitors to the stand can take part in the Mazda Photomash ‘Mazda Mashup’ for a chance to win an MX-5 for a year.

Leaving the stand with a framed copy of the resultant photo, every guest taking part in the Mazda Photomash will be automatically entered in a daily draw, with a randomly selected winner awarded the use of an MX-5 for a year.

Mazda’s second and unique, Laundry Green stand, a space close to Goodwood House, is a celebration of 25 years of the MX-5. A wide range of owners’ Mazda MX-5s from across the years will be on display, including 10th and 20th Anniversary, California, Le Mans, Sport Black and Sport Graphite special/limited editions.

A range of sportscars that inspired the design of the first, 1989 Mazda MX-5 -including the Lotus Elan and MG Midget – will also be featured, alongside a rare Mazda MX-5 GT4 race car and the chassis of the all-new Mazda MX-5. Moreover, pride of place will, of course, go to the Mazda MX-5 25th Anniversary Limited Edition.

Mazda will be showcasing all the latest stories and videos from Goodwood Festival of Speed on its new interactive online web platform called “Rebels with a Cause – The Mazda Community”. The site – www.mazdarebels.com.