Mazda at the Goodwood Festival of Speed: stands to deliver 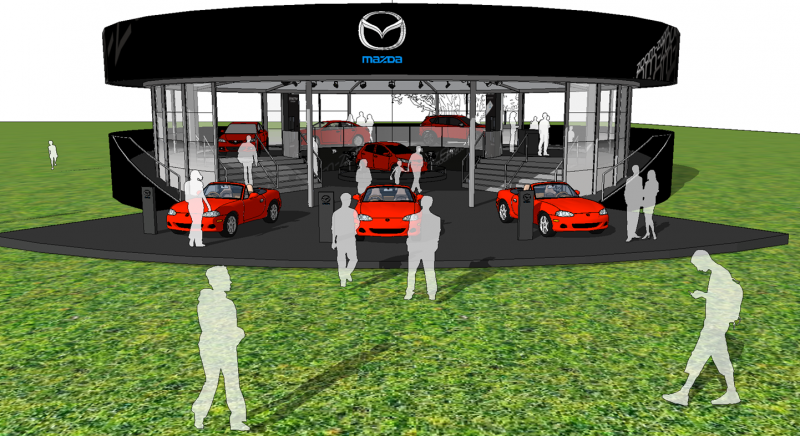 Mazda will have two main stands at this weekend’s Goodwood Festival of Speed. We caught up with Jen Banfield, events and sponsorship manager to find out what goes into Mazda’s biggest event of the year, how you build more than a square kilometre of stand and why a humble hose pipe is one of their most important allies.

Mazda logos on the roofs are eight metres wide.

Explain the difference between the two stands?

Both stands are about 572 square metres and they share the same basic structure. One stand is in the main showground and we’ll be using that to showcase our current range and the Hazumi B-segment concept car (the basis for the all-new Mazda2). The other is on the Laundry Green and will be dedicated to the Mazda MX-5. 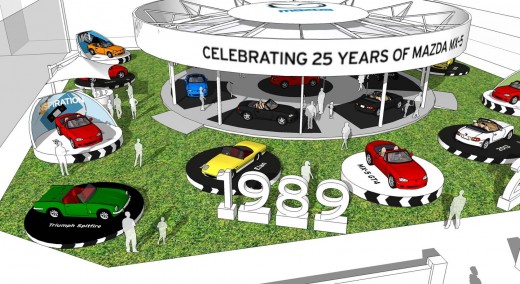 Tell us about the Laundry Green stand

It’s actually quite a powerful story. Originally we were planning to have 25 Mazda MX-5s, one for each year, but space was too tight so we limited it to more iconic MX-5s. We’ll also have an original Eunos from 25 years ago and the Lotus Elan and MG Midget that were the inspiration for the MX-5. These are people’s own vehicles so you can walk through a personal journey of the Mazda MX-5 from the beginning up to the celebratory vehicle from this year and the SKYACTIV chassis from the forthcoming MkIV.

What’s the secret to standing out?

For a start the stands are circular. Everyone else’s are square. Then there are only eight legs holding the roof up. They would usually have 36 to 40 but the agency involved, Imagination, employed an engineer from Germany, one from Holland and flew them into the UK to work with a couple of British guys. This enabled us to open the stands up to visitors while maintaining their structural integrity.

How long has it taken to build the stands?

They had to be designed and built in the factory first which took about six weeks. We were the first people on site, in the last week of May. Within May we had some design alterations that had to be made to the Laundry Green stand. That changed our design drastically which meant we had to bring everything forward to ensure we got everything done. But we were still building parts of them in the factory as we were putting them up on site, the production deadlines were that tight.

This event must be pretty important…

The amount we’re putting into this is four times more than our standard investment at Goodwood. It’s our biggest event of the year.

How difficult is it working in the middle of the West Sussex countryside?

It has its challenges. Lord March did a site visit and parked his car right under a forklift truck carrying a ton of stuff. The driver was quaking but Lord March was totally relaxed. Where some people lay cables then cover them up, we lift the grass, put cables in, then re-lay the grass. As long as you do it early enough you don’t even see the joins because the grass grows. But you have to water it so whenever our guys have some down time, the hose pipe comes out. Lord March was delighted to see us watering his grass!