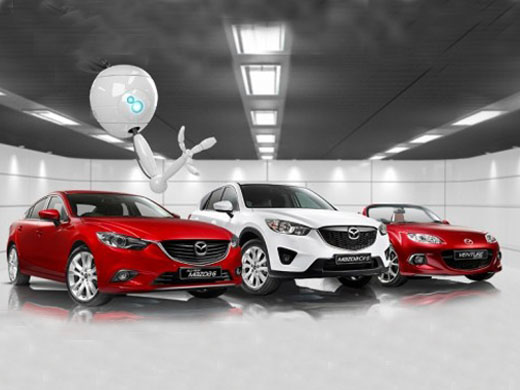 Mazda’s tagline of ‘defy convention’ will take on a whole new meaning this summer when motorists will get the chance to win stunning drives in three remarkable locations behind the wheel of Mazda’s equally stunning models – all-new Mazda6, Mazda CX-5 and Mazda MX-5.

Fancy driving through Southern Norway around the Fjords and on the famous Atlantic Road? This stunning drive will be a great test for Mazda’s award-winning CX-5 and is part of the prize that also includes driving the well-known Atlantic Road which runs for five miles and spans an archipelago with eight bridges.

How about a trip to Los Angeles and driving the dry river bed, scene of many famous Hollywood car chases including Days of Thunder and Grease? The five-day trip in a stylish Mazda6 also includes dining at INK, just voted America’s best new restaurant by GQ magazine.

Slightly closer to home is Italy’s famous Stelvio Pass, the second highest route through the Alps, climbing to 2,757m. With its 60 hairpin bends it is a tough test even in the world’s best-selling two seater sports car, the Mazda MX-5, which the winners will be driving as they head from Monza to Florence.

The prizes are part of the Surprising Drives campaign which started this week (15th July 2013) offering “unconventional test drives”. To find out more visit YouTube: http://youtu.be/Y3Q076eRYCs.

“These really are unconventional,” says Mazda UK Senior Marketing Manager James Crouch “fitting perfectly with Mazda’s idea of customers having fun and getting involved. These routes really capture the Mazda brand values of insightful, spirited and stylish – not being an onlooker.”

The prize winners will head off in early autumn with flights, meals and hotels for two adults included – and, of course, the fuel for their drive of a lifetime.

How do you enter? Mazda is drawing on its acknowledged leadership in digital marketing to launch a new online game that also defies convention.

The game, in which contestants use an arm to grab a ball, can be played on desktops and tablets. It will be promoted through Mazda UK’s own website (www.mazda.co.uk/surprisingdrives) and Facebook (www.facebook.com/MazdaUK). The coloured balls match the different test drives so contestants can decide whether they want to try for the top prize in Italy, Norway or the USA.

Instant weekly wins are also up for grabs. Eight lucky winners who enter the competition will have the chance to win a Mazda6, Mazda CX-5 or Mazda MX-5 for a week.

Apart from the top prizes there will be another 140 chances to win unconventional test drives in the UK in the all-new Mazda6, Mazda CX-5 and Mazda MX-5, through taking a test drive at a local Mazda dealership throughout August. Winners will get the chance to sample some of Britain’s finest venues and food in places from Sussex to Scotland, including the famous Gleneagles Hotel, The Kennels at Goodwood and Daylesford Organic in the Cotswolds.

Track days are also on offer with a series of tests at Croft, Donington, Silverstone and Castle Combe and Kirkistown lined up. “Our cars really do over deliver on what drivers might expect and these track tests will allow them to start to feel the performance and really explore the car’s abilities,” said Crouch.