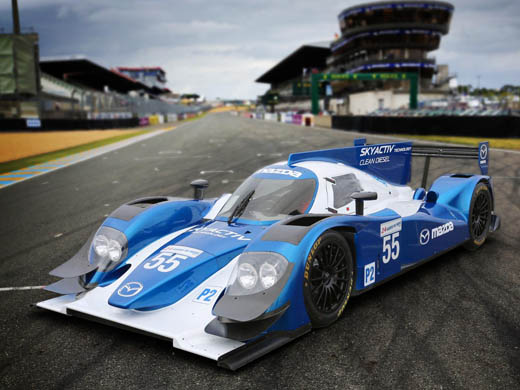 Mazda Motorsports has announced that it will supply its new SKYACTIV-D clean diesel race-tuned engine to teams competing in the Le Mans Prototype 2 (LMP2) class of international motorsport. The engine is scheduled to make its Le Mans 24 Hours debut with Dempsey Racing in 2013. Mazda remains the only Asian car maker to have won the world’s toughest endurance race, in 1991.

As part of Mazda’s expanding global motorsports activity, Mazda Motorsports is developing a version of the race-tuned new 2.2-litre SKYACTIV-D diesel engine for teams contesting the new Advanced Technology GX Class of the 2013 GRAND-AM championship, and in the UK, Mazda’s iconic roadster, the MX-5, is taking on the might of the supercar brands in the British GT Championship this year.

“Today we reopen our love affair with Le Mans and mark the beginning of a whole new chapter in motor racing for Mazda,” said Jay Amestoy, Vice President of Mazda Motorsports, Mazda North American Operations (MNAO). “We’ve won international races with rotary engine technology at Le Mans, Daytona and Sebring. Now we’re looking to return to the winner’s circle with what we believe will be the most advanced and cleanest production-based powerplant the sport has ever seen.”

“We’ll do it in true Mazda style as the SKYACTIV technology will allow Mazda to chart its own path in racing, showcasing the latest developments in fuel-efficient, powerful and clean powertrains. Our new SKYACTIV-D race engines will be available to European and US customers competing in the LMP2 class of the World Endurance Championship (WEC) and the American Le Mans Series (ALMS) and to teams entering the national GRAND-AM championship,” added Amestoy.

The SKYACTIV-D race engines are being developed jointly by the Mazda Motor Corporation in Japan, Mazda North American Operations and Florida-based SpeedSource Engineering. Dyno testing of prototype engines has already begun and on-track testing is scheduled for late 2012.

Mr Masahiro Moro, Executive Officer in charge of global sales and marketing of Mazda Motor Corporation, commented, “Mazda has always fostered the culture of ‘never stop challenging.’ And it was this spirit that drove us through 18 consecutive years of racing at Le Mans, until we triumphed in 1991. It is this same spirit that laid the foundation for our SKYACTIV Technologies, pushing us forwards to make technical breakthroughs. I am pleased that we will be supporting our customers who are taking up the Le Mans challenge by supplying them with race-tuned SKYACTIV-D clean diesel engines.”

Currently, Dempsey Racing (co-owned by racer/actor Patrick Dempsey) is making preparations to become the first team to use Mazda’s SKYACTIV-D racing powerplant in LMP2 next year.

Patrick and his business partner/co-driver Joe Foster have both competed at the Le Mans 24 Hours in the GT category, and are eager to return in 2013 contesting the LMP2 class with Mazda clean diesel-power. The team expanded its operations this year to include running in the American Le Mans Series, competing in both the Prototype Challenge (LMPC) and Prototype 2 (LMP2) classes as they prepare for their 2013 Le Mans effort.

“Our long-term partnership with Mazda has been fantastic, and we look forward to mutual success as we prepare for 2013,” comments Patrick Dempsey. “We are already focused on that preparation which is why we are currently testing our LMP2 car in the US in preparation for the next ALMS event. Our team and partners are excited to be associated with SKYACTIV-D technology and the cutting-edge green technology it represents.”

Dempsey Racing has been campaigning Mazda RX-8s in the GRAND-AM GT class since 2007, scoring a remarkable podium finish at the 2011 Rolex 24 Hours at Daytona. The team has steadily improved its performance in the series, and was a key contributor to Mazda winning the 2010 GRAND-AM GT Manufacturers Championship.

Taking on the supercar brands in Britain

In Britain, the 2012 Mazda MX-5 GT4 has been extensively developed to become the fastest and most powerful MX-5 in the World. Weighing just 1,000kg (including 150kg of ballast), it is powered by a highly tuned 2.0-litre MZR petrol engine which generates a maximum 315ps – a remarkable 157ps-per-litre. Power is taken to the rear wheels via a sequential six-speed Hewland gearbox operated with steering wheel-mounted paddles. Acceleration to 60mph takes only three seconds and the racer’s top speed is 160mph.

Battling against Lotus, Aston Martin, Ginetta and Nissan rivals, Mazda drivers Mark Ticehurst and Owen Mildenhall have already achieved two Top-5 finishes in class. The duo is looking forward to the next round of the British GT Championship at Brands Hatch on 24 June.

“Exploiting the MX-5 GT’s outstanding handling and high levels of stability under all loads is always great fun,” commented Ticehurst. “The Mazda is easy to handle and really responsive and rewarding to race – important factors for ensuring success in endurance racing. We are excited and optimistic about this year’s championship and fully expect the MX-5 to upset some of the established marques as the season unfolds.”