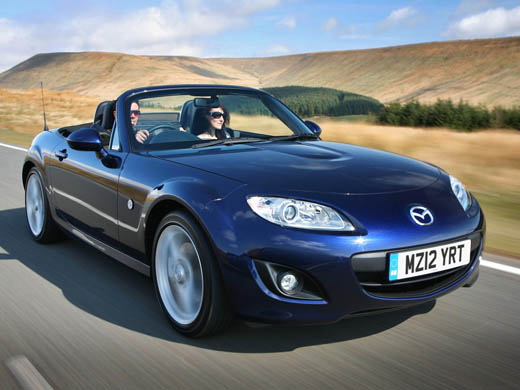 Reporting from this year’s Honest John Awards, MazdaSocial can reveal the Mazda MX-5 has been named ‘Most Popular Convertible’, adding yet another accolade to the model’s ever-expanding trophy cabinet.

This latest award once again proves that the world’s best-selling two-seater sportscar remains Britain’s favourite convertible – judging for the awards was based on which car reviews on the Honest John website (www.honestjohn.co.uk) have been read the most. The Mazda MX-5 took class honours ahead of a shortlist which also included the Volkswagen Eos, BMW 3-Series Convertible, BMW Z4 and Fiat 500C.

Honest John described the Mazda MX-5 as ‘a great sportscar’, praising in particular its handling abilities, ease of use and low running costs, while the website features many more glowing reviews from owners of the car.

“This award confirms that the Mazda MX-5 remains a resounding hit among the British public,” said Jeremy Thomson, Managing Director for Mazda UK. “In spite of a growing number of competitors in this sector, the consistent level of praise for the MX-5 – from journalists and motorists alike – marks it out as the ideal all-year-round convertible.”

Based on the Mazda MX-5 SE and Sport Tech models, the Venture Edition is available as a 1.8-litre MZR Soft‑top (SE) and a 2.0-litre MZR Roadster Coupe (Sport Tech), and is priced at £18,995 and £22,295 (OTR). The car retains all of the dynamic attributes, low running costs and open-top thrills that have cemented the Mazda MX-5’s place in the hearts and minds of motorists around the world.