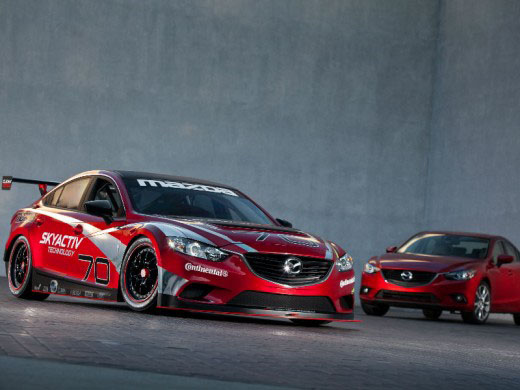 Leverkusen, 30 July 2013. On the 26th of July 2013, a diesel powered Mazda6 won the Grand-am-Brickyard in the GX class with the Mazda6 and its SKYACTIV-D Clean Diesel engine. Mazda was the only entry in the race with a diesel engine. Mazda’s victory was the first win for a diesel car in the history of the legendary racecourse. Sylvain Tremblay took the lead in the three hour race and steered the winning Mazda6 over the finish line.

This win was the fifth in a row for Mazda and has seen them move ahead of Porsche after 8 of 12 races in the GX manufacturers championship race. The winning Mazda6 was propelled to glory by a 2.2 litre SKYACTIV turbo diesel with 51 per cent stock by parts count – a true production based engine. Mazda chose this approach because it delivers the most honest way to demonstrate the quality, durability and reliability of Mazda cars.

Motorsports Director for Mazda’s North American operations John Doonan said that Mazda and SKYACTIV diesel technology have made history. “While this is our fifth win of the season, and fifth in a row, it is by far the biggest win to date. To win at Indy is every racers dream and that dream came true for Mazda here today”.

The winning driver Sylvain Tremblay also praised the Mazda team for their calm and concentration throughout the race. “It was not an easy day but the team remained focused and we came through for the win. To score the first ever win for a diesel at Indy, in our first year with the program, speaks volumes for Mazda and our team”.