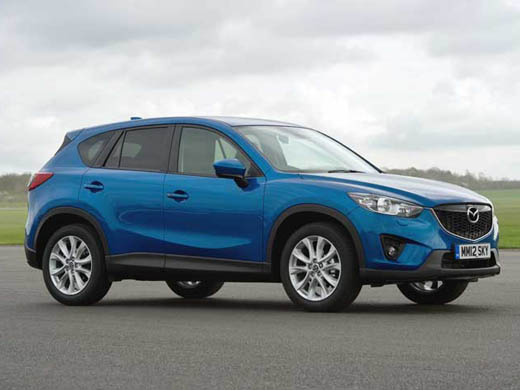 Mazda’s innovative new diesel technology is becoming a global success, reaching beyond traditional diesel strongholds with unparalleled sales elsewhere. While diesel engines power more than half of all new passenger cars sold in Europe, they are virtually non-existent in Japan, previously representing a mere 0.4 percent of the passenger car market. Now, in contrast, four out of five Mazda CX-5s (80 percent) sold in Japan have a 2.2-litre SKYACTIV-D under the bonnet.

Currently, SKYACTIV engines, transmissions, chassis and body technologies are available in the UK on CX-5 compact SUV models, and the all-new Mazda6 Saloon and Tourer – with the addition of the i-ELOOP unique brake energy regeneration system that can boost fuel economy by up to 10 percent.

A perfect example of how Mazda continues to defy convention, the SKYACTIV-D engine has a 14:1 compression ratio – unusually low for a diesel and the lowest currently available – which enhances fuel combustion and efficiency, while reducing harmful emissions, especially of nitrogen oxides (NOx). The remarkably smooth and quiet SKYACTIV-D is the only diesel to comply with Euro 6 emission standards without NOx after-treatment – long before the new standard takes effect in September 2014.

The engine’s variable twin turbocharger boosts torque and responsiveness throughout the rev range right up to the unusually high redline of well over 5,000rpm. Yet it still delivers best-in-class fuel economy and CO2 emissions – from 119g/km and up to 61.4mpg in the CX-5 and from 108g/km and up to 67.3mpg on the all-new Mazda6 sedan – figures which make SKYACTIV-D a viable alternative to hybrids, and they are a lot more fun to drive.

Mazda’s clean diesel technology is now destined for North America, another traditionally weak diesel market (at around 3 percent). Scheduled for arrival later in 2013, the all-new Mazda6 will be the first passenger car powered by a modern clean diesel to be offered by any Asian manufacturer in the USA.

“Mazda’s SKYACTIV-D engines have what it takes to change people’s attitudes and overturn the negative preconceptions towards diesels that prevail in the U.S. and Canada,” explains Mazda North America President and CEO Jim O’Sullivan. “We think they’re going to make a huge splash, especially when you consider how our clean diesel technology addresses growing consumer concerns about rising fuel costs and the environment.”

One clear advantage of the SKYACTIV-D is the fact that it not only meets strict emissions requirements in Europe, but also in Japan and North America. And unlike its competitor brands, which need to offer special green versions of their diesel-powered models, Mazda’s diesels do not require expensive NOx after-treatment in those markets either. Unsurprisingly, a SKYACTIV-D 2.2 has been short-listed for the 2013 International Engine of the Year awards at Engine Expo in Stuttgart, Germany during June.

“Because of its unique characteristics as a clean diesel, the SKYACTIV-D gives Mazda a major competitive advantage throughout the world,” says Ichiro Hirose, Mazda’s European head of R&D. “This engine has been highly praised across Europe, where it is already considered one of the best diesels available. And we’re confident that SKYACTIV-D will help Mazda play a leading role in the proliferation of diesel-powered passenger cars in other regions, too.”

In Japan, the Mazda CX-5 was voted ‘2012-13 Car of the Year’ as jurors praised its SKYACTIV-D 2.2 ‘revolutionary’ clean diesel technology and was also admitted to Japan’s Automotive Hall of Fame, finishing first in the ‘2012-13 Car Technology of the Year’ category.

In Europe, the CX-5 with SKYACTIV-D received the 2013 ‘SUV trophy’ presented by French weekly l’Argus de l’Automobile and the Motor Mundial’s ‘SUV of the Year’ crown in Spain. The Mazda CX-5 has also won ‘Car of the Year’ honours in Switzerland, Austria and Germany.

In Britain, the Mazda CX-5 has attracted a host of accolades, including being named as Britain’s ‘Best Buy’ SUV in the under £25,000 category by the experts at Britain’s biggest and best selling car buyer’s guide What Car? Explaining its selection of the £22,995, 2.2-litre, 150ps diesel CX-5 as a class winner, the latest ‘Awards 2013’ edition ofthe influential monthly publication states: “This really is one of the finest diesels you can buy. It has walloping low-down torque, yet is supremely flexible and happy to rev.”

This latest accolade for the Mazda CX-5 follows three earlier awards for the CX-5 compact SUV equipped with SKYACTIV technology – the 2012 WhatCar? Green SUV Award, the 2012 SCOTY (Scottish Car of the Year) Safety Award, Total 4×4 magazine’s 2013 4×4 of the Year Green Award and most recently, together with all-new Mazda6, the 2013 WhatCar? Ultra-low-carbon Award.