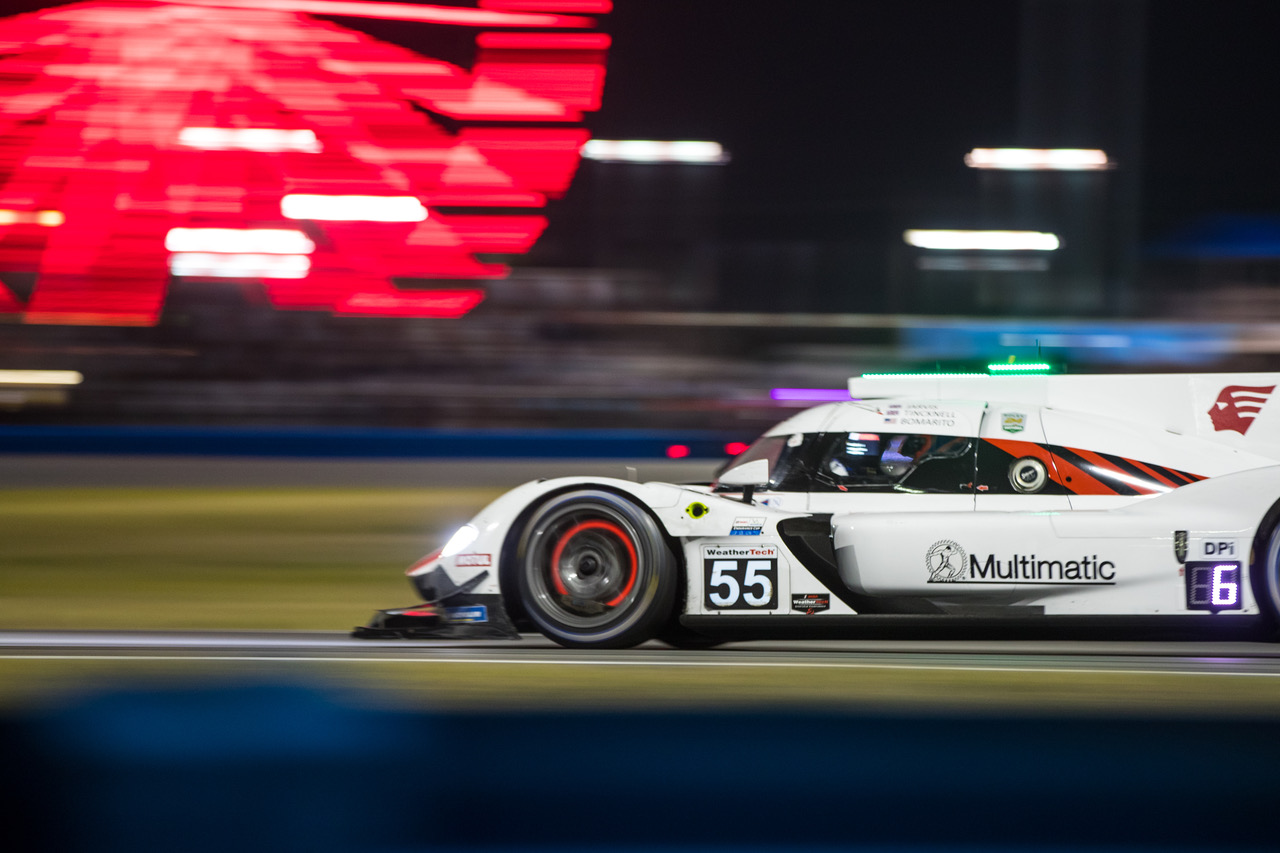 After 24 hours of intense racing, the number 55 Mazda RT24-P crossed the finish line at Daytona International Speedway in third place, just 6.5 seconds shy of overall victory.  This was a story of tenacity as the team found themselves three laps down at the halfway point due to early technical issues but relentlessly worked their way back to the front to challenge for the win.

The grid positions for the Rolex 24 were decided by a 100-minute race during the test weekend prior to the main event. The number 55 Mazda started from pole position but fell back with a tyre issue and then stormed through to second place, grabbing a front row starting spot for the 24 Hour race and securing a valuable 32 championship points.
The qualifying race turned out to be an omen for what occurred a week later.  As the cars left the pits to start the formation lap for the 59th running of the Daytona classic, Oliver Jarvis was unable to select first gear in the Mazda due to an electronics control glitch and there began the fightback.

A dogged drive by Jarvis put the Mazda back into contention before he handed it over to Harry Tincknell, who immediately got into an exciting scrap with former Multimatic driver, Olivier Pla. The Frenchman wasn’t given an inch but neither was Tincknell and the two of them put on a fine display of sportsmanlike racing, although the Mazda was struggling for pace compared to the overall leaders.  Next up was Jonathan Bomarito who also found the Mazda difficult in the later stages of a stint but kept solidly on the lead lap and displayed lightning reactions when a Lexus had a massive spin directly in in front of him that could have ended the team’s race on the spot.  An air jack problem in a fourth hour pit stop, combined with the slight pace deficit ultimately put the car a lap down while the engineers interrogated data to establish that the cause of the car’s handling problem was a loss of rear downforce.

Into the tenth hour race control reported that the Mazda’s rear lights were malfunctioning and insisted that the car pit to rectify the safety issue.  During the stop the root cause of the lights and performance problem were identified as the rear tail/wing assembly coming unlatched due to a damaged locking pin which also caused a major problem in fitment of the replacement part.  The team worked through the issue and fixed the mount, sending Tincknell back into the fray with lights and a rear wing now providing the correct angle of attack albeit now three laps down.  It was going to be a long night.

As the sun rose over the speedway, the Mazda was fully back up to speed, in fifth place, only two laps down, having stayed out during a full course yellow to take advantage of the wave-by at the 500 lap point, 15 hours into the race.  A combination of outstanding pace, two more strategic manipulations of the wave-by during safety periods, and Harry Tincknell driving by the leaders, ultimately put the car back on the lead lap with five hours to go, just over a minute back of the leader.

As the race approached the 22-hour mark, Jarvis was running a steady fifth, still a minute and twenty seconds back of the leader, when Scott Dixon suffered a massive blow-out in the Ganassi Cadillac, bringing out the full course caution and allowing the Mazda to catch the pack and finally pit with the rest of the DPi cars for fuel and tyres.  As the track went green the Mazda was third in a nose to tail group of five cars and quickly made up a spot to get on the tail of the leader.  The race was on!

Tincknell joined the race for the last stints in third position but an impressive pass on Renger van der Zande in the Ganassi car moved him up to second, but unbeknown to anyone at the time the tail locking pin had started to fail again and the car picked-up the rear grip issue that had afflicted it through the first half of the race.  A flurry of final stops saw the top four cars trade places in the pits and Van der Vande had a second puncture relegating him to fifth while Tincknell hung on to second but had to relent to pressure from Kamui Kobayashi’s Cadillac in the closing minutes, crossing the line in third place.

Tincknell said: “We gave it everything we had but it just wasn’t enough. Kobayashi gave me the option of letting him through or crashing to take second place from me. If it had been for the win I probably would have gone for Option B! We’re gutted not to win but we left nothing out there today.”

Third place at Daytona has got the team’s 2021 championship challenge off to a strong start. Next up is the return to Sebring in mid-March, the scene of the team’s 12-hour victory in 2020.