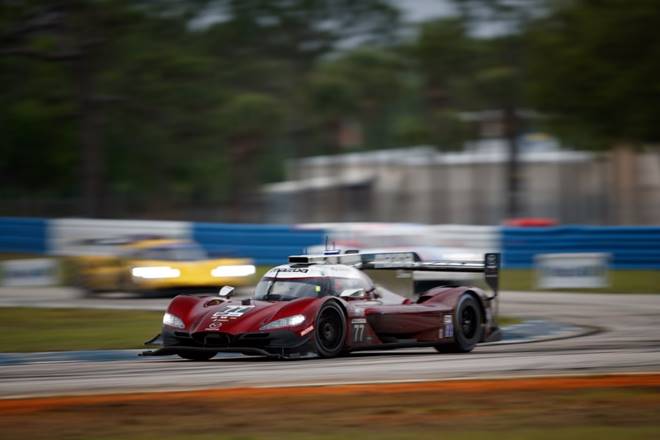 The first challenge for the drivers of Mazda Team Joest came in the form of the weather, as a heavy rain passed through Sebring International Raceway during the first part of the day, causing the race to start under a full course caution.

When the race finally got underway, Tristan Nunez, who had qualified the No. 77 Mazda RT24-P in second position, stormed to the lead with a bold pass on the outside of Sebring’s turn one. However, the challenge by the No. 77 came to an end when an electrical problem caused the car to stop on course in the second hour of the race. The car ultimately returned to the race and was classified in eleventh position at the finish, but Nunez set the third-fastest lap of the race before the checkered fell.

The No. 55 Mazda RT24-P of Jonathan Bomarito, Olivier Pla and Harry Tincknell went down one lap in the early stages of the race but mounted a charge through the field to make up the lap and then lead the race. Just before the halfway mark, Bomarito had an incident which forced him to bring the car for an unscheduled stop for repairs.

After losing three laps, the driving trio was able to make up one lap on speed, punctuated by Harry Tincknell setting the fastest lap of the race in the tenth hour with a time of 1:47.472. However, a lack of full-course caution periods minimised the team’s opportunities to make up more laps and the car took the checkered flag in sixth position.

The next round of the IMSA WeatherTech SportsCar Championship will be the Bubba Burger Sports Car Grand Prix at the Grand Prix of Long Beach in Long Beach, California on April 13.

“You can always count on Sebring to throw something unexpected at you, and the heavy rain that we had at the beginning of the race was certainly that extra factor in today’s race. Certainly it played a role in the issues we encountered today, which was really a shame because it was clear the Mazda RT24-Ps were very fast all day long as proven by Harry setting the fastest lap of the race at night in the tenth hour of the race. I’m proud of the effort all the drivers and the team put in today to overcome all of these challenges and to keep fighting for Mazda.”

“We definitely had a car that was fast today at Sebring, so it’s disappointing that we weren’t in a position to fight for the win at the end of the race. I’m really disappointed I made a mistake that caused us to have an incident, so thanks to the crew for getting the car fixed so quickly and to my teammates who drove like madmen for the rest of the race to make up the lost time.”

“It was a tough day. We had so much pace, the Mazda RT24-P was fantastic to drive and the team did a fantastic job. It’s unfortunate what happened with Jonathan, he was pushing hard for the lead and in those conditions, it could have easily been Harry or me and it is the three of us are working together on the car. It’s my last race until Watkins Glen, but I think the guys are in good shape for Watkins Glen and Detroit and I’m looking forward to coming back in for the Six Hours.”

“This was an extremely difficult race. Sebring is a really big challenge, but with the heavy rain at the beginning of the race, and then the rain starting and stopping a couple of times, it was an even bigger challenge for the drivers. The Mazda RT24-P was extremely fast, and I am looking forward to competing for a victory when I am back for Watkins Glen and Petit Le Mans.”

“This was a tough race for us and for all the Mazda Team Joest boys, who worked so hard this week. Our Mazda RT24-P was quick – we had a rocket today, and we would have been in the fight for the victory. It’s too bad that we had that electrical issue, but the guys fought back and really showed the spirit they have.”

“Big thanks to the crew guys, who worked so hard to fix the car so we could get back on track. I am confident that our Mazda RT24-P was the car to win here with Tristan’s big lap in qualifying and his amazing pass on the opening lap. And, from the moment we came back on track, it was as quick as the leaders. We can all see the potential in front of us and I’m exciting to get back behind the wheel in Long Beach.”

“It was an amazing experience to lead the 12 Hours of Sebring, my home event and my favorite race, in the rain. The rain really mixed things up but it was really a challenge – the opening stint was probably the biggest driving challenge of my career. Big thanks to the guys for working so hard to get the car repaired, they really showed again the Never Stop Challenging spirit. We owe them a great finish.”