Mazda drives to second place in the Daytona 24 Hours 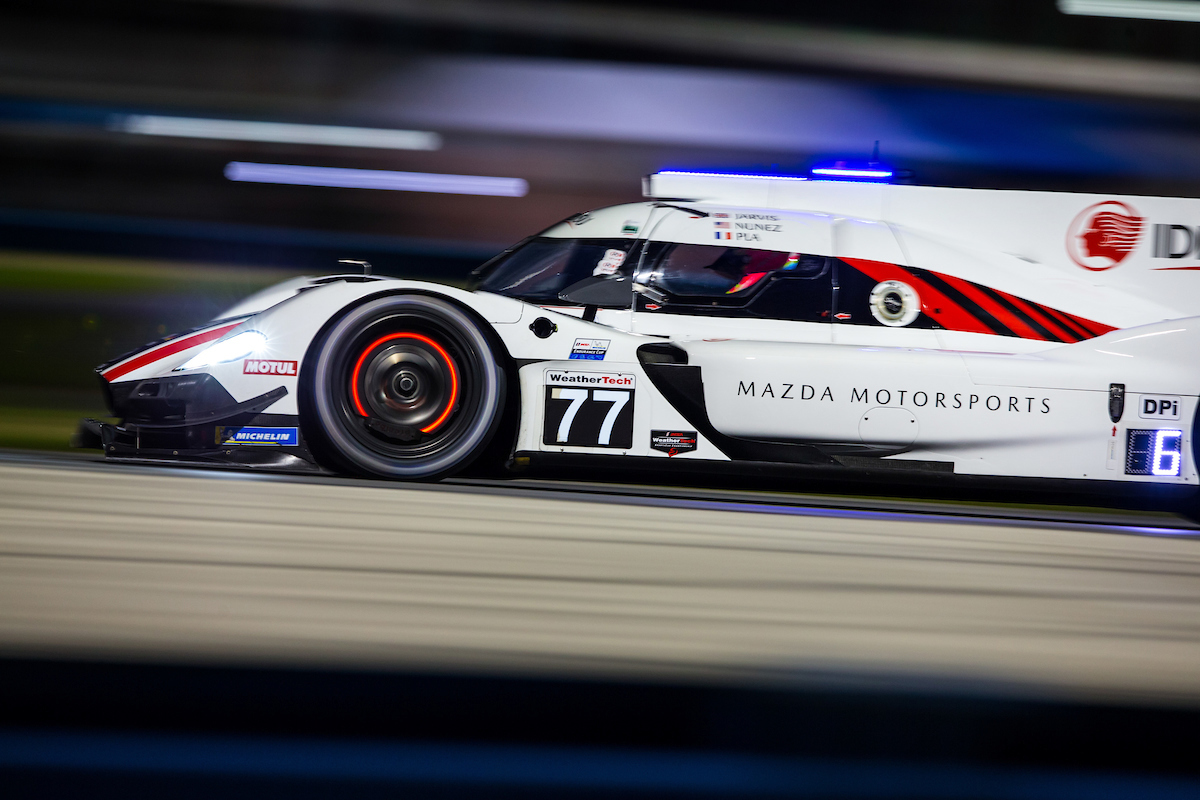 The two Mazda RT24-Ps of Mazda Team Joest battled over 24 hours of racing at Daytona International Speedway to record the company’s best overall finish at the Daytona 24 Hours.The number 77 Mazda driven by Olivier Jarvis, Tristan Nunez and Olivier Pla finished in second position, completing 833 laps over the 24-hour race. Jarvis qualified the car on pole position, and from the drop of the green flag it was a factor for the victory, leading a total of 190 laps in the race.

After having to serve a penalty just before the halfway point of the race, the team’s three drivers battled back into contention for the win and ran in second position throughout the final hours of the race, with Jarvis ultimately taking the flag one minute and five seconds behind the overall winner. This result improves on Mazda’s previous best overall finishing position, which was fifth place in 1989 with a Mazda 767B.

The number 55 Mazda RT24-P driven by Jonathan Bomarito, Ryan Hunter-Reay and Harry Tincknell overcame a challenging race to finish in sixth position. The drivers had to battle back from incidents in traffic and were slowed by damaged bodywork as well as a penalty, but remained in contention for the victory throughout the race. Although it was slowed by a mechanical problem in the final hours, they finished the race in sixth position and collected valuable championship points.

The next round of the IMSA Sportscar Championship is the 12 Hours of Sebring at Sebring International Raceway on the 21st March.

“It’s a great day for our programme to finish on the podium at Daytona and to bring both cars to the checkered flag. One of our goals for this season is to win one of the endurance races, and this result shows that the work that the team has put in during the off season has paid off. No one team in the field had a perfect day, but our guys had to be patient and battle back from the adversity they faced throughout the race. It’s a great result for Mazda and one that every person on the team should be proud of.”

“Today is a great day for Mazda. Having both cars finish the race and putting one on the podium, and battling for the lead throughout the whole race, shows how the team has continued to improve and push the program forward. This puts us in a really good spot and gives us a lot of momentum for the rest of the season.”

“We weren’t able to show the true potential of the No. 55 Mazda RT24-P at the end of the race, which is unfortunate. Overnight, the car was really hooked up – the best car I’ve driven at Daytona. But on the positive side, both Mazdas completed the 24 hours and the No. 77 car finished a strong second place, which is great for the program and for the championship. We will keep working and come back stronger at Sebring.”

“Obviously, this is a great day for Mazda and for Mazda Team Joest. A podium at Daytona and finishing the race with both cars is a massive step forward for the program and gives us all a lot of confidence for the rest of the season. Of course, we would have liked to be battling for the win at the finish as well, its just such a shame we didn’t have the chance. But we have good points in the bank and a fast race car, so we are excited to get on with the season with the next race at Sebring.”

“This result is a huge step forward. It’s great for Mazda, for the drivers, the engineers and the crew. We missed out on the victory by just a little bit, but when you consider how much progress we’ve made in two seasons, this feels like a victory. And I have to say, the car was really good at the end of the race. The durability and reliability that we have now means that we can challenge for the championship.”

“This is such a great day for Mazda. Because our Mazda RT24-P was so good, we were in contention for the lead from the green flag all the way to the checkered. Our focus in developing the car has been to improve the reliability, and now we have a car that we know is fast and that can content for the win in a 24-hour race. For me personally, it is the first time I’ve been able to finish the Rolex 24 at Daytona, so to do that and be on the podium is really special.”

“Finishing the 24 Hours of Daytona and being on the podium is an amazing result for Mazda Team Joest. Thanks to the crew, to everyone at Multimatic, and to my teammates Olly and Tristan, we had a very fast Mazda RT24-P. We pushed hard the whole race, battling for the lead from the start all the way to the flag.