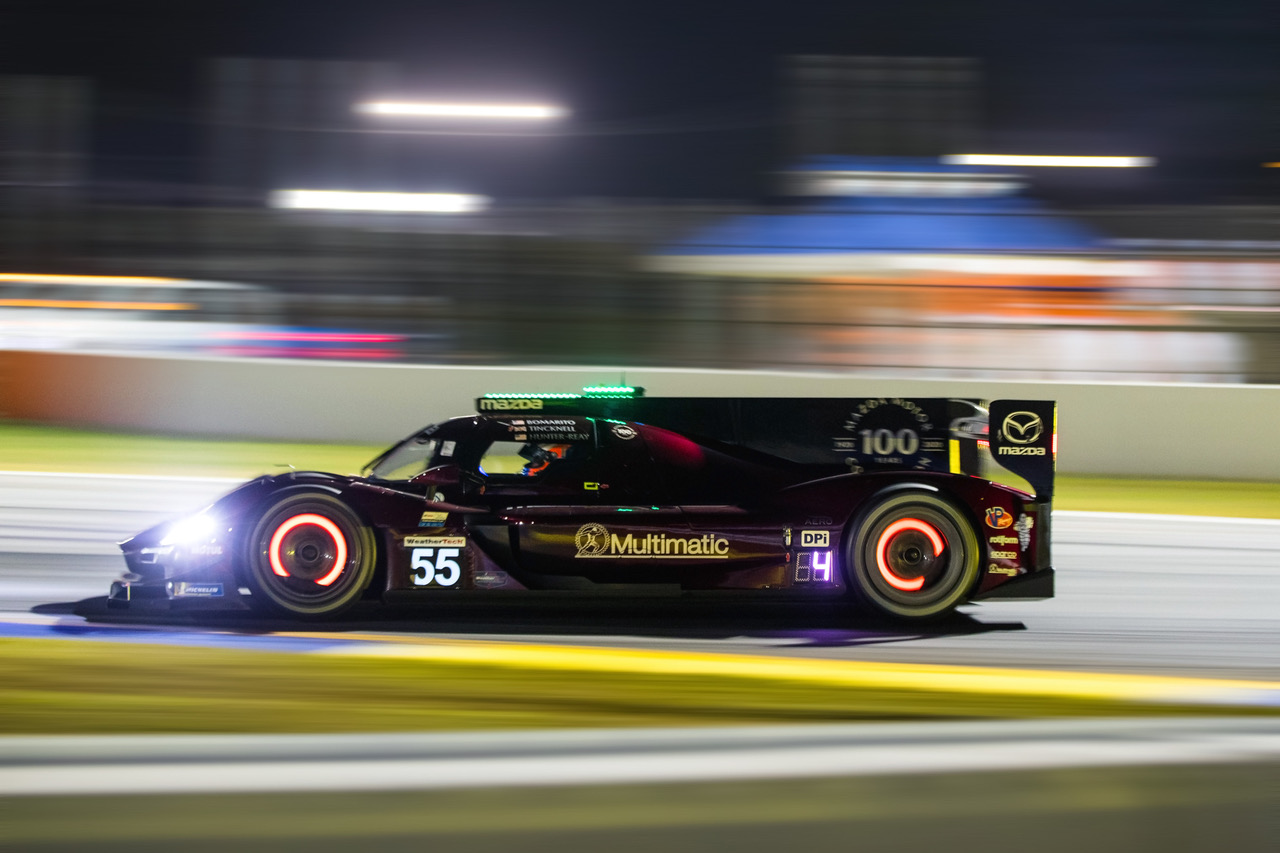 It is generally understood that racing requires three components to be successful:  impeccable preparation, exceptional execution and luck. That third factor was completely absent from Mazda’s 2020 Petit Le Mans campaign. There was a high level of optimism for a good result having finished second in the six-hour race at the track just over a month ago. The classic layout suits the fast and agile Mazda RT24-P and all indicators were that a win was a very real possibility, but in the end the tired and disappointed team had to settle for sixth place at the chequered flag for the number 55 Mazda of Harry Tincknell, Jonathan Bomarito and Ryan Hunter-Reay and seventh for the number 77 car driven by Oliver Jarvis, Tristan Nunez and Olivier Pla.

Both Mazdas made strong starts; the number 77 in the hands of Nunez immediately gained a spot, moving up to fifth, while Tincknell successfully fought to hold onto fourth in a seriously aggressive pack.  Despite the fact Petit Le Mans is a 10-hour race, the DPi cars set off at the usual furious pace and it looked set to be a classic race.

Barely past the 10 minute mark the number 55 went straight on at Turn 10, the most demanding braking zone of the circuit, and a major crash was only averted by Tincknell’s quick reactions as he threaded between two cars, before going off the track, as he explains:

“When I hit the brakes there was a big bang at the front right and I wasn’t stopping very quickly. On the trajectory I was on, I was going to hit an LMP2 car so I came off the brakes and managed to squeeze between the LMP2 car and the number 31 DPi car. I knew the gravel would slow me down enough to avoid contacting anything but the hit in the gravel trap was really hard and that came back to haunt us later in the race.”

While the number 55 was being repaired, Tristan Nunez was making strong progress in the number 77 and as the race moved into its second hour he passed Felipe Nasr for third place before pitting to hand over the car to Jarvis. The Englishman carried on where his American team mate left off, making a great move on Pipo Derani to take second place and maintain that spot with little stress.  The number 77 Mazda stayed in the top three over the next few hours, switching to Olivier Pla who put in a very strong double stint. At the four-hour mark the race had settled in well for both cars – the only disappointment being that the number 55 was five laps down but with hope of slowly getting them back with strategy, already having used a yellow to reduce the count – but then Bomarito was forced to pit the number 55 with a gearbox leak, the manifestation of the slam into the gravel trap earlier on in the race. The team fixed the problem but now it was a 20-lap deficit with no hope of pulling those all back in the remaining time.

Almost exactly at the half-way mark of the race, Nunez boxed and handed the number 77 to Jarvis in another perfectly executed stop. As Oliver exited the pits he was hit by a GTD Ferrari, sending the Mazda heavily into the wall causing extensive damage that made it a challenge to get back to the pits as the decidedly second-hand looking car had to negotiate a complete lap to get help. The Mazda team set to work and in just 30 minutes the number 77 had a new nose, front splitter, rear deck, wing and a complete right rear suspension corner. With four hours to go, the two Mazdas, as unbelievable luck would have it, ended up on the same lap 15 seconds apart, albeit 19 laps down.  The number 55 was sixth in class at that point, the number 77 seventh; positions they would hold until the chequered flag.