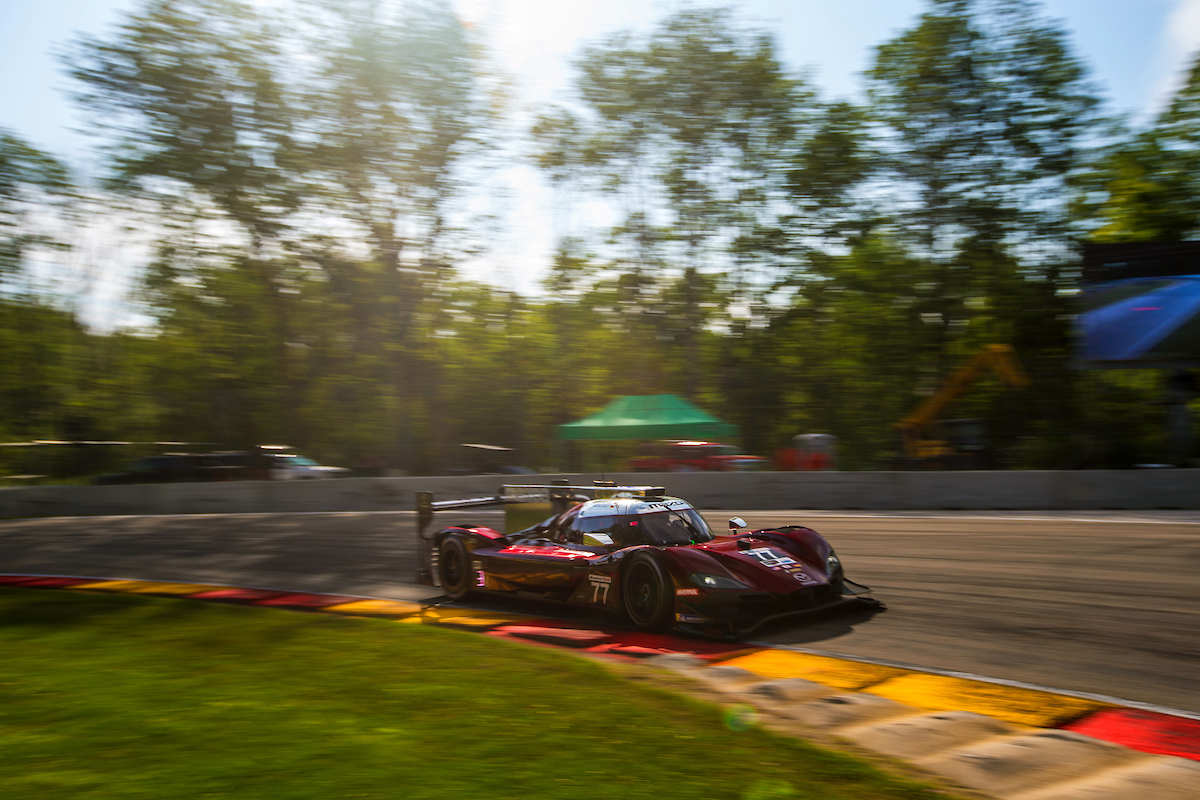 The second half of the Petit Le Mans saw the No. 77 Mazda RT24-P, driven by Timo Bernhard, Oliver Jarvis and Tristan Nunez emerge as the dominant car in the Daytona Prototype international field.

After starting the race in fifth position, the Mazda became a threat for the race victory in the middle stages of the race. Nunez briefly held the race lead early in the fourth hour, but in the next stint Bernhard firmly put the Mazda into the race lead. Successive stints by all three drivers saw the Mazda continue to lead the race, with pace and fuel in hand over their rivals.

Jarvis held the lead until the final caution of the race which fell with forty minutes remaining. After the restart, the No. 77 Mazda RT24-P was slowed with a mechanical failure, forcing Jarvis to lose the lead and ultimately finish the race in sixth position.

The No. 55 Mazda RT24-P driven by Jonathan Bomarito, Olivier Pla and Harry Tincknell retired from the race in the fifth hour after a mechanical failure.

“It was definitely a bit of a bitter finish to the race for us. Our team had a range of emotions and challenges today, but I was really proud of how the engineering team kept working at both cars to make them better and better throughout the day. When we were forced to retire the 55, the engineers, spotters, and strategy staff from that car stayed to offer their support to the 77 which I think speaks volumes about the attitude and work ethic of everyone in the program and our technical partners at Multimatic and AER. It was looking really good for us in that last hour, but it just slipped away. I am immensely proud of every person on this staff and the work they put in to elevate this program in 2019.”

“It’s too bad that today just wasn’t our day. We were feeling pretty confident after our first stints that the car was good and thought that if we were just patient and settled in, the race would come to us. But even though today was disappointing, we have enjoyed a dream season with Mazda Team Joest with Harry, Olivier and myself getting our first win at Watkins Glen and then Harry and I getting a second win at Road America. Three wins for Mazda is just unbelievable, and everybody involved in the program and everybody at Mazda should feel really proud of this season.”

“It’s definitely disappointing to not see the end of Petit Le Mans in our No. 55 Mazda RT24-P. This is my first Petit and it is really challenging to manage the traffic, especially with such a fast and short lap. But we have had an incredible year, with three wins for Mazda and two wins for our car. Our crew and engineers deserve all the credit for never quitting from when we rolled off the trailer at Daytona until today.”

“It’s a shame we didn’t make it to the finish because our Mazda RT24-P was good and was getting better as the race went on. The way things played out with the sister car we could have been right in the fight for the win, but I am very happy with how this season has gone and proud to be a part of the first Mazda victory at Watkins Glen and would have loved to help the team win another race today.”

“A really tough result today. This is a hard race and we started the day thinking we would have a very tough time trying to get a result, but the car just got better and better and the crew gave us great stops and great strategy all day. It was really a pleasure to drive the car today and to be a part of Mazda Team Joest in 2019.”

“I really have to give credit to the team today. We certainly didn’t have the fastest car all weekend, but the team really got it right for the race. It was really ours to win and it’s pretty difficult to take that we didn’t win today. But I have to say that despite how it ended at Petit Le Mans, we’ve had an incredible year with the pole positions, podiums and victories for Mazda Team Joest.

“Our team did an amazing job today, and thanks to them and my teammates Timo and Olly we were in a position to win today. It’s pretty tough to know that we ran a race that deserved to win but that opportunity was taken away from us so close to the end. It was really an up and down day – we went from not thinking we had a chance, to leading most of the second half of the race, to then having it taken away. It’s a tough way to finish what has been a great season for the program.”