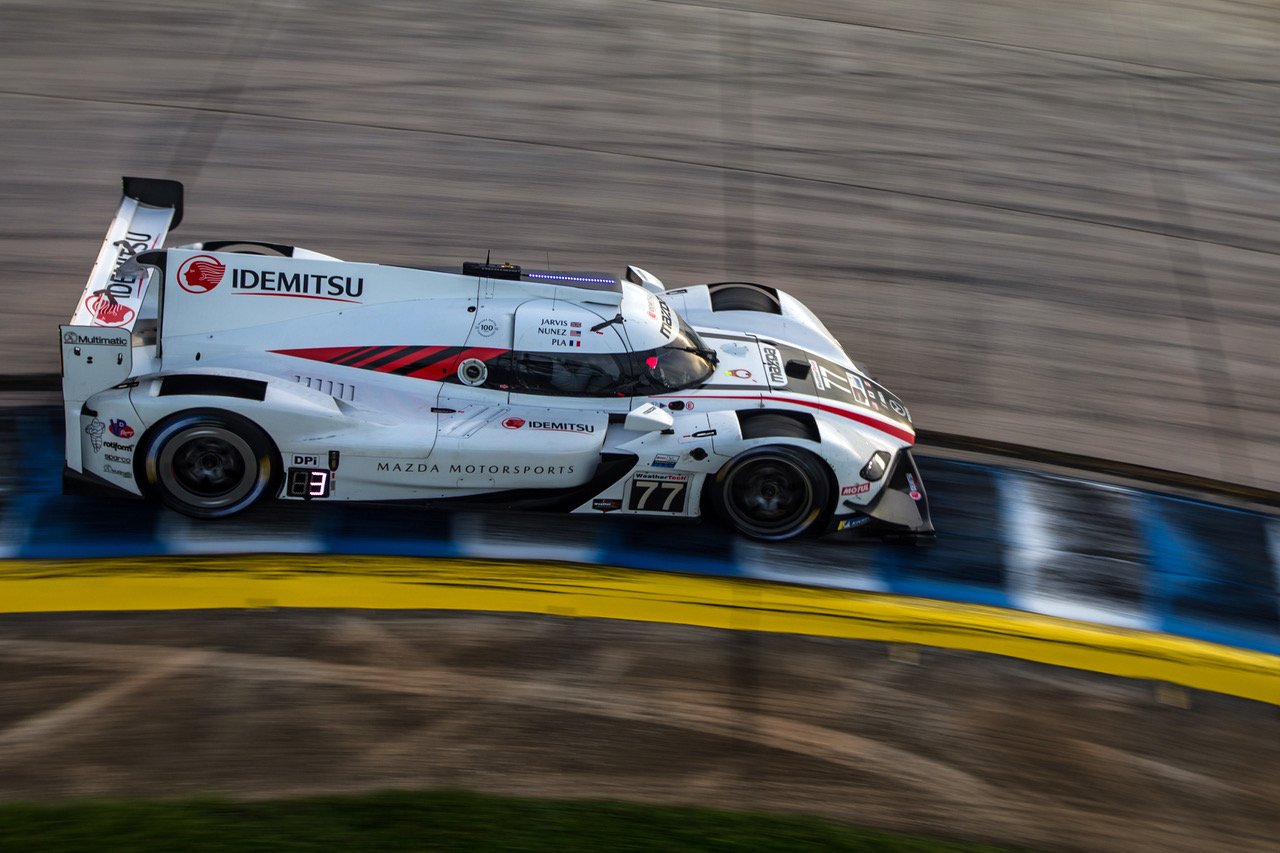 Mazda Motosport endured a tough weekend at round six of the IMSA SportsCar Championship last weekend.  The number 55 Mazda of Jonathan Bomarito and Harry Tincknell finished the race in fourth place, while the 77 Mazda of Oliver Jarvis and Tristan Nunez crossed the line just behind them in fifth position.

After early race contact, a puncture and penalties for both cars, a creative pit strategy and some determined driving hauled the Mazdas up the order from the very back to finish fourth and fifth at the chequered flag, the number 77 recovering from being a lap down at one point.

The two-hour, 40-minute race got off to a typically fast and furious start, with the pair of Mazda RT24-Ps hanging onto their third and sixth qualifying spots respectively in the hands of Jonathan Bomarito and Oliver Jarvis, despite it taking a considerable number of laps to get the tyres into their working window due to Mid-Ohio’s famously low grip surface.

The number 77 car had struggled to match the pace of the frontrunners during the practice and qualifying sessions so its engineering team launched a bold strategy, which had Jarvis coming in for his first pit stop considerably earlier than the other DPi cars. Unfortunately this move, to ultimately gain track position, didn’t come off due to subsequent contact with a GT car, a puncture and a couple of penalties.

“That was a difficult race for us,” said Jarvis. “We were fighting with the balance of the car all weekend so we tried to go off strategy in an attempt to make up positions. Unfortunately during my stint I had light contact with a BMW which spun me and punctured a tyre, which resulted in putting us a lap down. With some good strategy calls we managed to get back on the lead lap and Tristan did a great job to overtake the number 5 Cadillac at the end to grab fifth. We came to Mid-Ohio with higher hopes than fourth and fifth so we now need to regroup and focus on Petit Le Mans.”

The drivers of the number 55 Mazda went into Mid-Ohio ranked fourth in the championship.  Despite not having the pace to compete at the front, they maintained that position and look forward to Road Atlanta knowing that the car will be quick there.

“Jonathan took some front end damage at the start of the race,” said Tincknell. “Firstly on the right hand side in a tussle with (Pipo) Derani and then on the left after contact with a GT car so the car was a little second-hand after that but the pace was okay. A communication error in the first pit stop meant that Jonathan nearly took the fueller with him so we got a penalty for that which put us to the back.”

Bomarito fought on and managed to catch up to sixth place before handing the number 55 Mazda over to Tincknell, who then had to serve an immediate drive through for a pit lane speed infringement. The second of the day for the Multimatic squad, diagnosed as a calibration issue that was rectified before the final critical pit stops.

With little left to lose the number 55 car then switched its strategy, coming in for a fuel top-up under yellow while the rest of the field stayed out, thus gaining a fuel advantage without losing any track position. This paid-off in the final round of stops as, with less fuel to go in, it was super-fast, putting Tincknell back out in fourth place, his eventual finishing position.

“We go back to Road Atlanta next and we know the car is quick enough to win there so we’re just going to have to have three good races in a row,” he said. “We’re still in it!”

The next round is indeed at Road Atlanta and it is the blue ribbon 10-hour “Petit Le Mans” event, being contested on Saturday 17th October.