Racing into the sunset: Mazda at the 2014 Birkett 6 hour Relay endurance race 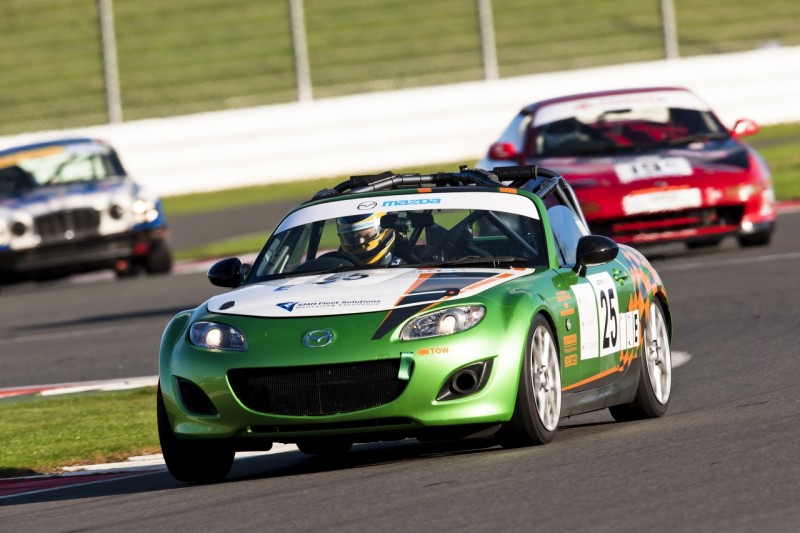 Mazda made it to the finishing line of the gruelling 2014 Birkett 6 hour Relay endurance race last weekend (25 October) after an epic battle to complete the greatest number of laps of Silverstone’s fast and punishing Grand Prix Circuit.

To see the action from the race watch exclusive footage here:

The Mazda UK JOTA Sport team entered a pair of race-prepared Mazda MX-5s and six drivers in the unique event, which was founded in 1951. Today it is the largest motor race in the UK, with a total of 70 teams lining up for the rolling start. James Mills from The Sunday Times was joined by Alistair Weaver contributor to The Sunday Times and Mark Ticehurst, a semi-professional racing driver and regular driver for Mazda Motorsport. Racing the second Mazda MX-5 were Dan Trent of PistonHeads.com, Gareth Evans of Parkers and Mazda Race Driver and Auto Express Senior Road Test Editor, Owen Mildenhall.

For most competitors, Birkett marks the end of another action-packed year of motor racing, and will be the final hit of high octane until next season – an early Christmas party, if you like, for the club race crowd.

“There’s a special feel to the Birkett,” said Graeme Fudge, PR Director of Mazda Motors UK. “And it’s terrific to find an event where such a remarkable selection of cars can compete together on track at a grassroots level. It’s exciting, and that makes it a good fit for the Mazda MX-5.”

With the exception of single seaters, cars of all shapes, sizes and eras are eligible to compete and with up to six cars and six drivers per team, the crowded paddock car park resembles Bluewater shopping centre during the Boxing Day sales. It’s a fun event that truly does defy convention with its simple objective: in the six hours, teams should lap Silverstone as many times as possible. However, the rules and regulations set by event organiser the 750 Motor Club are anything but straightforward…

Only one car per team can be circulating the track at a time; there’s a handicap system to help less powerful cars; and cars are divided into four classes. This makes the Birkett the equivalent of a relay running race with teams electing to have one car and its driver replacing another on the track. At the same time – and very much in the spirit of the event – should one driver end up in a gravel trap or, worse, the crash barrier, the team will be notified and can then send out another car to take its place.

By the time the chequered flag was waved beneath the setting sun, the Mazda team finished in 45th position on the track out of over 70 teams, and 53rd after the handicap system was taken into account.

“It’s little like an end of season Ibiza party,” said driver James Mills of The Sunday Times. “Albeit one where the clubs, music and dancers are replaced by a race track, the sound and smell of engines running Castrol Classic R oil and the camaraderie of men and women who love nothing more than dressing up in Nomex underwear.”

It was left to the experienced Ticehurst to line up on the grid for the Birkett’s rolling start, at 11.45am. With a track that was still greasy from the previous day’s rain, the hope was that the Mazda MX-5’s perfect weight distribution and assured handling would see Ticehurst carve his way through the field.

In fact, the track quickly began to dry out, and any advantage the team hoped to have over opponents began to slip away. The showroom-standard 2-litre, four-cylinder, naturally aspirated engine produces approximately 160bhp and drives the rear wheels via a six-speed manual gearbox. The car’s great advantage – namely that it could brake later and carry more cornering speed than many more powerful machines – began to be diminished as drivers dived to the pitlane and sent out team-mates in cars wearing slick tyres.

Ticehurst handed over to the second car and driver, Owen Mildenhall, and the Auto Express man set about delivering consistent, fast lap times on slick tyres. However, drama would soon strike. His car’s rear wheel hub failed, pitching the car into a spin at Club corner and that left it beached in the gravel trap. These cars have completed five seasons racing, including two 24 hour races, been involved in numerous contacts on the race track, had the extra stress applied to the drive train from slick tyres and this is the first failure of its type, demonstrating the robust and reliable nature of the MX-5.

James Mills was dispatched onto the track, while the other Mazda MX-5 was recovered to the pits and fitted with replacement parts. An hour later, and with the final nuts and bolts tightened, it was over to Dan Trent to take the next shift at the wheel. He returned enthusing about the race, despite having to drive during an extensive period of the safety car leading the field.

“Where else are you going to get a stripped and caged Citroen Saxo put together on a shoestring sharing a corner with a fire-breathing Porsche 935?” asked Trent. Read his race report here. 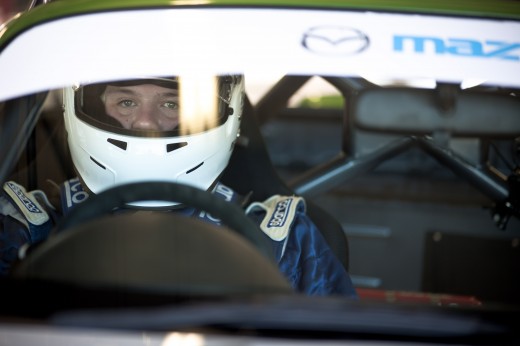 Gareth Evans and Alistair Weaver took their turns at the wheel, and both reported dicing with a terrific assortment of cars, before Ticehurst jumped back in and then made the final driver and car change of the day, to Dan Trent to make up for his extended period stuck behind the safety car.

Trent had the honour of racing to the chequered flag as the sun set over Silverstone. And that’s not all. As the finishing cars peeled back into the pitlane, they were greeted by an avenue of cheering team mates, friends and family who applauded the 69 finishers of the Birkett 2014 endurance race. It perfectly captured the camaraderie of this unconventional motor race.