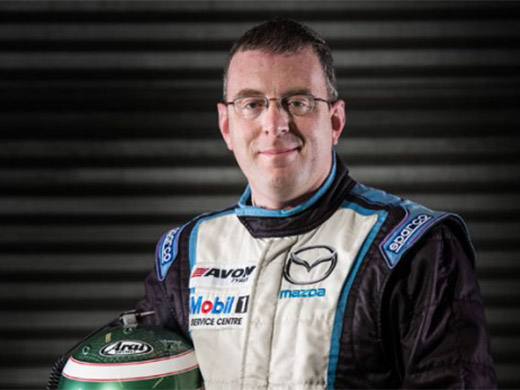 As is always the case, it was great to be back racing a Mazda MX-5. Switching from the highly modified GT4 I raced in the British GT Championship last year to the virtually road standard production car might seem like a step down but as I found out back in May, when I took part in a Britcar Production race, racing the production MX-5 car is always hugely entertaining. It might not have a lot of power but the chassis more than makes up for it. Having done two 24 hour races, countless sprint races, track days and passenger ride days – the production MX-5 race car is a superb advert for the durability of the world’s best-selling two seater roadster, too, which is just what you need for one of Britain’s oldest and toughest races – the Birkett Six Hour Relay.

Run by the 750 Motor Club this unique event has taken place for 60 years. The concept is relatively simple: just like a running relay, you run the race as a team. While one car circulates the next waits in the pits, before being released onto the track as the first car pits. With over 70 teams entered, the range of cars in the pits was amazing – everything from Radical prototype racers, historic saloons, Caterhams and even a team of Smart cars – the breadth of the field was amazing.

Our team comprised of six drivers and two identical Jota prepared Mazda MX-5 production race cars. The informal atmosphere of the paddock was great and the weekend started with 20 minutes of practice for each of the six drivers.

Practice:
Unusually for motorsport, practice didn’t decide the grid – this is created from a highly complex handicap system – but even so with the full Silverstone Grand Prix Circuit to play with we all pushed hard in our 20-minute sessions.

With a standard engine and gearbox the Mazda MX-5 is down on power compared to the most of the other cars out on track, but with stiffened suspension and upgraded brakes, it’s fantastic in the corners. Strong in the braking zone, with good traction and a lovely balance in the quick corners – you can harass much more powerful full-race machinery into and through the corners. The damp track played to our strengths as well – and practice was enormous fun. Carving past countless cars into the braking areas and overtaking around the outside, up the inside and through the middle – the Mazda MX-5 was so much fun. I jumped out of the car after practice with a huge grin, as did all the other drivers, and while it didn’t count for anything both myself, Jethro Bovingdon and Mark Ticehurst recorded times in the top ten of our sessions.

Race:
Despite the pace of the Mazda MX-5 in the practice sessions, the complicated handicap system meant we started 63rd on the 70-car grid. But with the track still damp, Mark Ticehurst was confident of making a lot of progress over the first hour of the race.

With excellent live stream footage from the car’s in-car camera, we watched in the pits as Mark stormed up into the top 15 over the first few laps, before consistently running just outside the top ten. Amazing, given the long straights at Silverstone and the relatively small power output of the Mazda MX-5, but as in practice, Mark was making the most of the grip and balance of this race car. Meanwhile, given the relay concept, I’m waiting in the second car ready to go out as soon as Mark comes in.

After an hour I headed out on track and with the track still damp I was, like Mark, on wet tyres. For the first 30 minutes the track was perfect and I was having a hoot but with the tarmac starting to dry, we needed to switch to slick rubber.

In a normal race that would mean a tyre change pit stop but in the Birkett Relay, the team simply gets the next car ready on slicks and then I pit and hand over the “baton”.

The changes in condition meant a short stint for me but with Evo journalist and experienced racer Jethro Bovingdon flying on slick tyres – our race position was still good. The next three drivers all drove well, making no mistakes, although a fully dry track handed the advantage to more powerful cars.

Still, with just over an hour to go Mark and I did the last two stints, with me doing the last session. I have to say; the last thirty minutes of the race were the most fun I’ve had in a car for a long time. Not only did we post the fastest lap of the weekend for the Mazda MX-5, I also had a nonstop dice with a Caterham and a Stock hatch racer, which was clean, close and feisty racing. All the Mazda UK guests got to enjoy it on the live feed in the hospitality suite, while I took flag with a huge smile on my face. Most importantly, both Mazda MX-5 production race cars ran faultlessly and every member of the team had a great time.

The result? Well after six hours of action we finished in 35th place overall – a fantastic result for one of the few teams in the race using cars with standard production engines. Yet again, the Mazda MX-5s proved their worth and I can’t wait to race one again.