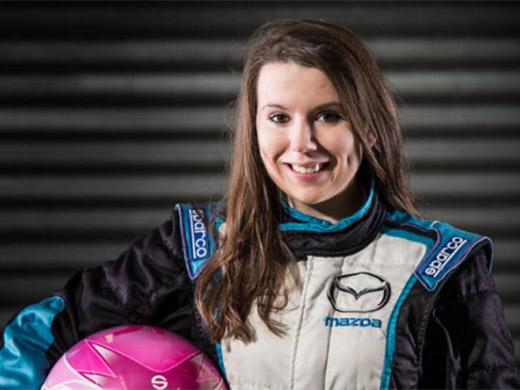 Racing for the Mazda Motors UK Team, for me, is always a brilliant experience. We have a fantastic team at Jota prepping and running the Mazda MX-5 to the highest standard and the MX-5 itself runs faultlessly. I couldn’t believe how lucky I was to be invited to race with them once again, this time in the 750 Motor Club Birkett 6 Hour Relay Race.

Although I do know what to expect from a race weekend now, I could not help but be surprised at the variety of motorcars that our team would be up against. “Anything with four wheels” was the general consensus. There were Caterhams, Radicals, Smart Cars and Mustangs. With this in mind, I did think we would have a challenge ahead – even if it was going to be fun.

Practice:
As British weather always is, the skies were very unpredictable and with a hurricane forecast for the following Monday, I tried to take the track conditions at face value and just get on with it when I got into the car. Team mates Vicky Parrott and James Batchelor tested with me on the Friday with Mark Ticehurst giving his guidance and experience when possible. I did around 10 or so laps on the track and each time the conditions were different. But, wow, the Mazda MX-5 just couldn’t have been better for the wet and greasy conditions. We could storm past most of the competitors, especially around the corners. I soon got rather competitive with a VW Golf GTi which I tailgated on the bends but the straights were frustrating as he floored it and kept ahead. But practice isn’t for racing anyway…

The Race:
Race day came. I was in the last qualifying session. It was a wet track and then it started to rain half way through. I couldn’t have been happier to see rain! The balance and weight distribution was perfect in the Mazda MX-5 and I felt so confident to “stick it on the inside”. The MX-5 proved to be a mean challenger in the wet. I qualified 8th fastest during my session.

The race started at 11.45am with the plan to have each drivers out once with roughly an hours driving. The plans changed with the weather as a tyre change was needed and it was far faster in a relay race, using two cars, to swap cars with different tyres than change tyres.

Mark Ticehurst had gained 38 places at the start of the race in wet conditions. Each of my teams mates did fantastically and most importantly kept it on the track. There were a few cars that didn’t, Jethro Bovingdon drove past an upside down car near Chapel Corner and I think we all saw someone in the gravel trap.

By the time I was allowed out to play, the track was dry and I literally could not wait to get out on track. Since the changes at Silverstone, it has been one of my favorite circuits and in particular, I like the daring Abbey corner as well as Maggots and Becketts where I could take plenty of curb. The Mazda MX-5 was excellent fun! After a few frustrating yellow flags and a safety car I was sadly called in to be replaced by Mark. I could have done it all over again!

Overall we finished 35th and the Mazda Motors UK Team were once again successful in producing a reliable and fun race car which reflects perfectly to the MX-5 attributes. I had a brilliant time and all I can say is – you should definitely buy one! Thank you to everyone involved.