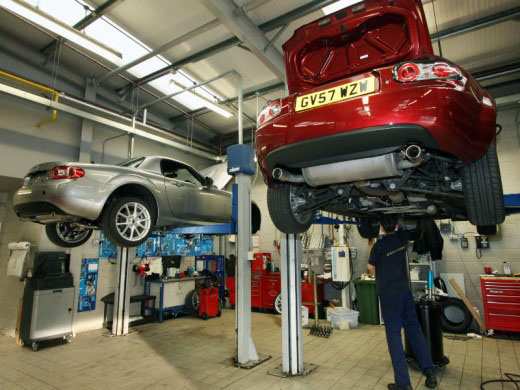 Mazda’s sales rejuvenation sparked by the popularity of its range of SKYACTIV models including the all-new Mazda3, on sale 3rd January, is bringing added benefits to the dealer network: more loyal customers.

Not only that, the number of Mazda vehicles coming back into dealerships for servicing is expected to increase as sales successes translate into new models requiring their first check-up.

“Since our sales have been growing again we can expect growth from servicing to accelerate from March 2015 as new cars come up for servicing,” explains Aftersales Director David Wilson-Green.

Selling new cars is only part of the equation for boosting customer loyalty. The other part is to keep new owners returning to their franchised dealers and it’s a challenge that the network is relishing.

“We have enviable overall average service loyalty levels of almost 55 per cent, this is measured over 10 services and has been going up,” says Wilson-Green. By March 2015 it is forecast that Mazda cars in the UK that are less than five years old will be at their lowest at 180,000. Those figures explain why Mazda is also focusing on second, even third owners.

In this respect, Mazda’s pioneering Digital Service Record, launched nine years ago, has been a real bonus, since it allows dealers to contact owners who might have left the network or missed a service. “We will price match any service offered by an independent garage under our ‘service price promise’ to keep a customer in our network,” explains Wilson-Green.

“When those cars are in, we offer great customer service, a visual health check and free software updates on all cars which helps us to embrace a bigger family of customers.”

By doing that, Mazda and its dealer network keeps more customers coming back time and time again.