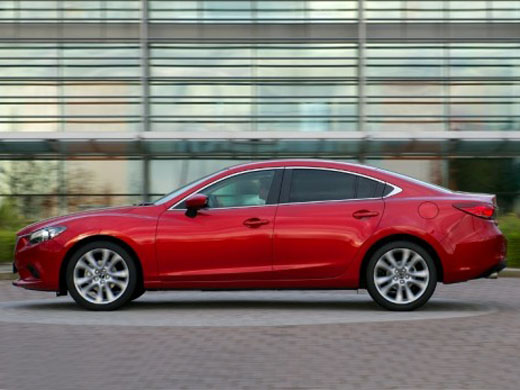 The annual Fleet World Honours, which is organised by Fleet World Group, publishers of Fleet World magazine, is one of the most prestigious events in the UK’s fleet calendar.  A host of honours are presented across a series of categories representing cars, commercial vehicles and fleet management to motor manufacturers, service companies and individuals who have, in the opinion of the judges, achieved the highest possible level of excellence in their sector.

Declaring the all-new Mazda6 winner of the ‘Best Upper Medium’ award, judging panel chairman and Fleet World editor, Steve Moody, stated: “The new Mazda6 oozes quality.  It’s a big car with lots of space, rides beautifully and handles well, while the cabin is stylishly simple and built to a very high standard.  Add in that clever SKYACTIV technology which ensures emissions are incredibly low and you have an extremely fine business car.”

Presenting Mazda, with the ‘Best Small SUV’ award for the Mazda CX-5, Moody said: “The CX-5 shows that an SUV can be efficient, with low CO2, and still have the benefit of four-wheel drive.  It’s also nicely built with lots of cabin space, and it drives well too.  These credentials are so important for a car to feature high up the user-chooser lists and in the case of the CX-5 will ensure that its driver appeal is matched by a sound whole-life cost proposition.”

“We are delighted that the first two Mazda models to feature our revolutionary fuel-saving SKYACTIV technology have both been acknowledged as ‘award winners’ by such discerning fleet sector experts. Together with the recent Best Upper Medium award from Fleet News for the all-new Mazda6, the Mazda6 Tourer shortlisted for ‘Best Estate category’ and the Mazda CX-5 highly commended in the ‘Best Crossover category’, Mazda’s SKYACTIV models are proving to be real contenders in the fleet arena,” commented Mazda’s Steve Tomlinson.

“The all-new Mazda6 is the most important fleet model in the Mazda range, delivering an unbeatable combination of power and performance, low emissions (from just 108g/km) and fuel economy – placing it at least one company benefit-in-kind tax band below virtually all the competition.”

“Company car drivers can now enjoy the previously impossible combination of top-notch diesel performance with class-leading emissions and excellent fuel economy (up to 67.3 mpg), without resorting to the smaller engine displacements of some rivals, enabling us to retain the fun-to-drive characteristics that are typical of the Mazda brand.”

The all-new Mazda6 is available with a choice of 36 models across the two bodystyles, six-speed manual and automatic transmissions and six trim levels (SE, SE Nav, SE-L, SE-L Nav, Sport and Sport Nav). Priced from £19,595 to £28,045 (on the road). The 150ps 2.2-litre SKYACTIV-D Saloon diesel has class-leading CO2 emissions of just 108g/km and combined fuel consumption of 67.3mpg. Benefit in Kind tax for a 40 percent tax payer is £133 a month (Sport trim).