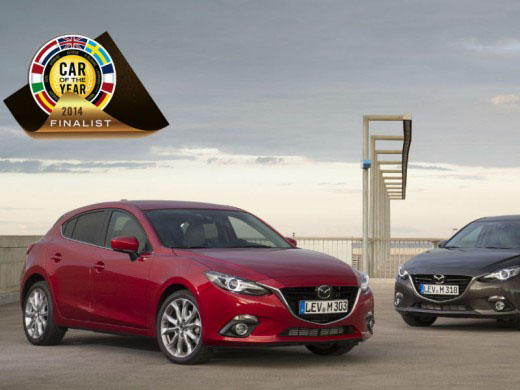 The all-new Mazda3 has been chosen as a finalist for the Car of the Year 2014 award, validating Mazda’s unconventional approach to building uncompromising vehicles. Mazda’s refreshing new compact was nominated together with six other cars from 30 candidates vying for Europe’s oldest and most cherished automotive prize.

Freshly introduced in Europe starting in October, the new Mazda3 was the only Japanese model among the final seven and only one of two non-European cars. It would be the most prestigious title so far for the latest generation of Mazda’s all-time bestseller, which has already won autoguide.com’s Car of the Year in the U.S. The new Mazda3 was also a finalist for Green Car of the Year as well as 2014 Canadian Car of the Year: Best New Small Car in two price categories. In addition, it made the “10 best cars” lists recently at publications like Focus (Germany) and Car and Driver (U.S.). The latest Mazda3 thereby follows in the footsteps of its predecessors: The first two generations won more than 130 awards around the world, and both have been here before as finalists.

Like its new-generation siblings – the Mazda CX-5 and Mazda6 – Mazda truly challenged convention with the new Mazda3. Hatchback or sedan, it features the complete line-up of ultra-efficient lightweight SKYACTIV Technology underneath its stunningly aerodynamic KODO – Soul of Motion exterior. The forms have function inside, too. One highlight of the brand-new cabin is the enhanced human-machine interface (HMI), which includes the Active Driving Display, one of the first head-up displays in the C segment, and an optimised rotary commander. This model was also chosen to launch MZD Connect, Mazda’s new in-car connectivity system bringing smartphone convenience safely into the cabin.

Behind the wheel, the new Mazda3 shines with a range of powerful yet frugal* petrol and clean diesel engines mated to crisp six-speed manual and automatic transmissions. To top it off, the stiffer yet lighter body ensures top-class passive safety, protecting occupants and pedestrians should an accident occur in spite of an array of active safety systems unmatched in this class. Euro NCAP recently granted the new Mazda3 the maximum five stars for safety.

“It’s a great honor to receive this recognition for what is our most important model,” says Jeff Guyton, President and CEO Mazda Motor Europe. “The reception for the all-new Mazda3 has been tremendous thus far, with strong sales and order-take following outstanding reviews from journalists and Mazda fans around the world.”