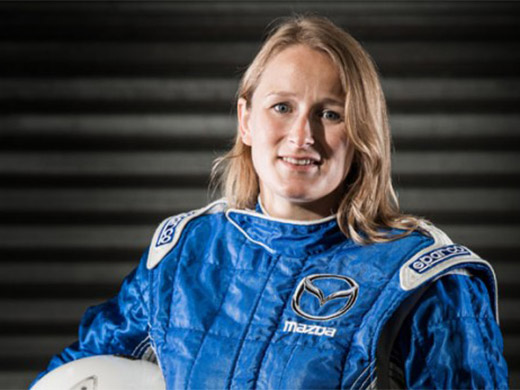 I threw myself out of a plane at 12,000 feet earlier this year. Granted, there was somebody used to such madness strapped to my back with a parachute on, but I can honestly say that hitting over 100mph in freefall was less of an adrenaline rush than taking Maggotts flat in fourth with a mentalist in a Saxo right behind you, mid-Birkett race.

This actually started for me at Rye House kart track, when PR Director Graeme Fudge asked whether I wanted to go racing with Mazda.

Well, yes. Of course I do. Show me where to sign, thanks very much.

Having said that, I have next to no experience in a race car but for a semi-disastrous (no damage done to person or machine, but only one race finished out of two) outing at a wet Ginetta Challenge race at Rockingham in 2011, and the obligatory corporate karting events. So there were some nerves at the prospect of the maelstrom that the Birkett 6hr Relay Race promised to be with 70-plus teams running anything from an MG Midget to a Radical.

Any nervousness was allayed at the successful testing session we had at Donington. This was a track I was familiar with, the car was wholly unintimidating and brilliantly balanced, and I loved every moment. By the end of it I was a couple of seconds off the ‘fast crowd’, but I felt confident that I could be competitive.

Practice:
Friday practice started wet. One of the cars was having an anti-roll bar/traction issue which took the morning to resolve, but I was out in the other car learning the track and getting used to the Jota prepared Mazda MX-5 in damp conditions. It was epic. Communicative, poised, grippy and exactly what you want as a relative rookie to the racing scene.

My only issue was learning the track. Being a gaming-a-phobe, I hadn’t spent any time learning Silverstone GP track on the boyfriend’s Xbox and so I went out with very little idea of where the next corner was going on the fast, flowing International GP track.

By the end of the day I’d put in a 2.41sec on slicks (Mark Ticehurst and co. were infuriatingly distant in the mid-low 2.30s), but I was happy with myself and I knew where the corners went. Always a good thing, with the race beckoning the next day.

Race:
Qualifying took place on Saturday morning. Each driver had 20 minutes on track, and mine went well in greasy conditions where I could make the most of the fact that the Mazda MX-5 had so much traction that you could drive round the outside of most of the competition. It went so well that we were all hoping for rain throughout the race.

It wasn’t to be. Mark Ticehurst started off with an astonishing first run, where he could take advantage of the still-damp track and overtook well almost 40 cars in the first stint. Our position slipped as the track dried and the competition got faster. By the time I went out at 3.30pm, it was slicks all the way.

The race was a patchwork of emotional extremes. I was a little intimidated by some of the Radicals and other obscure track cars. They would arrive, dive past and disappear in the time it took my adrenaline-befuddled brain to register their existence, so I’d fluctuate from relief at having avoided that obscure aero-racer and red-mist moments as I battled with a Ginetta G20 and various rorty front-drive hatches. Then there were the moments of euphoria at having hit an apex properly or resisted a confidence-lift where I knew one wasn’t needed, despite my self-preservation instinct ringing all the alarm bells at the prospect of keeping the right-pedal planted into that left-hander.

My aim was to be competitive, have some fun and keep the car in tact. All those boxes ticked, it was an extraordinary experience. I now see why for some people it becomes an addiction. I may even be one of them.