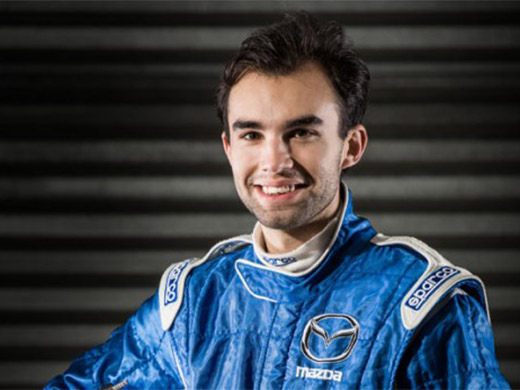 I was under no illusion at how inexperienced I was at racing a car. It was only this summer I had nervously taken my racing licence and accepted an invitation from Mazda to race an MX-5 production race car. So you can image my fear at testing the MX-5 race car a few months ago at Donington Park Circuit. But thanks to Mark Ticehurst, he had coaxed me through a whole day of trying to get the best out of not only the Mazda MX-5, but also myself.

So I turned up at Silverstone for the Birkett 6-Hour Relay Race flushed with confidence and a broad smile.

Practice:
It was here the grin turned into a desperate plea to go home. Jota Sport had booked a day’s worth of practice at Silverstone for the benefit of me and my fellow team mates Vicky Parrott and Jade Paveley. And thank goodness they did because it turned out I had a lot of learning to do.

As soon as we arrived at the track and walked into Garage 1A, the team were hard at work fettling the car for our track sessions. But the rain was coming – and it was going to rain hard. I slotted myself back behind the wheel of the Mazda MX-5 and it immediately felt like I was back at home again. Despite the racing seat, the roll cage that sat on top of the car like some badly-erected scaffolding and a helmet that, outwardly, looked far too big for me (it wasn’t I hasten to add), the Mazda MX-5 was a comfortable place to sit. I was going out on wet tyres and with my wipers on I set about familiarising myself with the car again and, more importantly, the circuit. We were on the Grand Prix circuit, and even though I had driven it countless times on my Playstation, the track’s undulations needed some learning – that’s not to mention the technicality of Silverstone’s famous Maggots, Beckets and Chapel corners.

Foot flat to the floor for the Hanger Straight and hard on the brakes for Stowe. Turning in I had no time to take in the next couple of seconds – the back-end immediately snapped throwing me into a spin. Shaken I carried on only for the same thing to happen at Farm – one of the newer corners on the Silverstone circuit. I brought the car back concocting my first-ever racing driver’s excuse. There HAD to be something wrong the car I explained. Mark came over and agreed with me saying: ‘When I handed the car over to you I knew there was a problem with the set-up – the rear anti-roll bars are wrong. But I didn’t want to say that to you because I knew it would terrify you.’ Thanks Mark!

The next session brought finer weather and slick tyres – and I was back feeling comfortable again. The Mazda MX-5 racer has a standard engine and gearbox and as such drives much like a road-going version. That means the car has a lovely balance to it meaning you can really lean on the car through fast cornering. And now the car was handling just like that. That earlier smile returned to my face.

The Race:
I had been told by many colleagues and friends to opt for a light breakfast on race day. Stirling Moss always stuck by that so why shouldn’t I? This is what I was telling myself as I was taking the hotel lift down to the restaurant, but five minutes later I had a steaming pile of fried food on my plate.

Heading into the circuit I felt like a real racing driver, even though I wasn’t one. The day before we were one of around 10 teams using the circuit and the only one using our garage. But race day was completely different – 74 teams, 100s of cars, trucks and mechanics. This was when the Birkett 6-Hour Relay Race got serious.

In my spare time, I do a bit of amateur dramatics. Nothing major but it keeps me on my toes and gets the adrenalin running. But racing a modest-powered car for the first time in a field of 74 entrants creates a completely different kind of adrenalin. No, delete that – sheer fear.

An hour before my stint I couldn’t help but wander in the garage getting into everyone else’s way. My legs just wouldn’t stop moving. And then Bob, one of the team members took me to one side in a very calm voice and told me that they might be bringing Jethro in. The experienced and all-round nice chap Jethro was pounding around on slicks – but the rain was coming. If the skies opened, I’d be on with wets.

Thankfully the time didn’t come and Jethro finished his stint. It was my turn. Just drive steadily and bring the car home I was telling myself. But by the time I had reached the bottom of the circuit down at Club corner, the skies opened. And I was on slicks.

Unbeknownst to me, the team were readying team mate Vicky on wets should I take to the pits, but for some strange reason I just carried on regardless. On came the headlamps and the wipers of my competitors but I just kept driving on and on. I was enjoying myself and I wasn’t going to stop.

Half-way through my stint one of the pro drivers crashed his Ginetta G50. It brought the safety car out for 15 minutes. Despite my best efforts at trying to keep the tyres warm I hurtled into Copse corner far too ambitiously after the safety car stint. Out snapped the back; I turned into the slide but it was no good. I was facing the wrong way and a BMW 3 Series was driving towards me. He swerved and I swung the wheel round. All of this was to the tune of deafening tyre squealing and me shouting ‘My God!!!!!’

Thankfully I lost no positions but it was a kick in the teeth to say the least. The rest of my stint was a more leisurely affair. But I eventually had to hand over to Vicky. But I so didn’t want to.