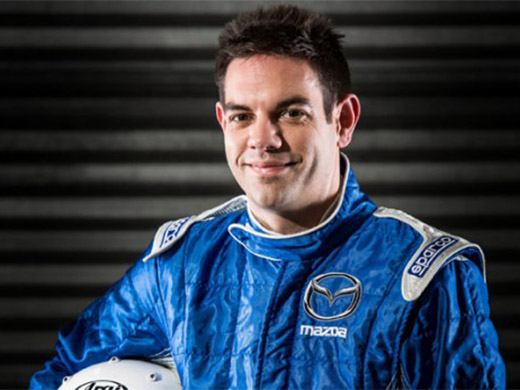 I’m glad to say that I didn’t research the Birkett 6 Hour Relay race much before I turned up at Silverstone. I knew vaguely that 70 teams with a wide variety of machinery would take part and that a handicap system would aim to give each a fighting chance of victory. I knew the Mazda MX-5 production racers well from a previous Silverstone 24 hour adventure and I knew – of course – that it would be brilliant fun. However, the sheer scale of the event took me by surprise. Seventy teams, each with up to six cars makes for an incredibly busy, diverse and exciting paddock. As I walked towards our garage there were Caterhams warming up, old Jags being unloaded from trailers and a steady stream of weird and wonderful racecars trundling down to the scrutineering bay. The Birkett 6 Hour seemed like my sort of race.

Our double pit garage alone had eleven cars crammed into it, the two Mazda MX-5 production race cars squeezed hard against the left wall, next to them a group of battle-scarred Citroen Saxos, a Clio Cup racer, a Mini Cooper S… Everyone was smiling despite the fact it was 7.30am on a Saturday morning and wandering to race control to sign on and then up the length of the pit lane to scrutineering, so was I. Motorsport is a wonderful thing but so often a race paddock is dominated by money pure and simple, this felt like proper grassroots stuff.

Practice:
I think we’d all been secretly hoping for rain, knowing that our relative lack of straight line pace would be less of an issue on a slippery track – when handling balance and confidence in the car become key. These Mazda MX-5production race cars are terrifically easy to drive – transparent and tolerant of mistakes like you wouldn’t believe. If it was wet, surely we’d be amongst the quickest in the field? Qualifying started at 9am and the sky was dark grey and the track looked treacherous. The Mazda MX-5s flew and with proper racing ‘wets’ it felt like we were driving a different track to some of the other cars, which were hampered by running semi-slick tyres. I’ve never outbraked half a dozen cars into a corner before, then driven around the outside of them like they were stood still. For a magical 20-minutes or so it felt like we’d turned up to a 2CV race in a Le Mans prototype. Forget the handicap… with bad weather we might just win this thing overall!

Race:
That thought didn’t seem too far-fetched as we watched Mark Ticehurst take the start and leap from 63rd to 25th in a single lap. Owen carried on the good work but the sun was threatening to break out and with the track drying I was sent out on slicks. Effectively it meant our day of giant-killing was over but even on a bone-dry Silverstone track the Mazda MX-5 was almost untouchable through the corners. However, to bag a good lap time required a lot of commitment and quite a ruthless attitude to dealing with ‘faster’ cars that were actually quite a lot slower in the corners. The trick was to measure when to let the more powerful stuff through and not be bullied going into section where they might hold you up. For example, through the first part of the lap the Mazda MX-5 was simply superb so it was key to hold your ground down the old pit straight – perhaps frustrating those behind – and then pull a big gap through the following complex of fast turns.

My hour passed amazingly quickly and I can only remember snippets – dicing with an MR2, out-braking it and then running wide and nearly spinning on the grass, a huge moment leading onto the new section of track and somehow keeping it all straight, a turbocharged Golf spitting flames ahead of me, finding a car on its roof in the middle of the track on one lap (the bloke inside clearly ok but very distressed, as you might imagine!) and the feeling of flinging the Mazda MX-5 through Maggots/Becketts with barely a lift. It was mega.

The rest of the race played-out on the screens in our pit garage, the Mazda MX-5 never missing a beat and the weather refusing to play ball despite some ominous clouds appearing every so often. The team did brilliantly and to come home 35th overall seemed like a real achievement. With the handicap system surely we’d bagged a top 15 finish? Erm, no. We were classified 55th. Nobody knew why or how and at the end of the race nobody seemed to care. The smiles remained up and down the length of the pit lane. Great race. Can I come back next year, please?