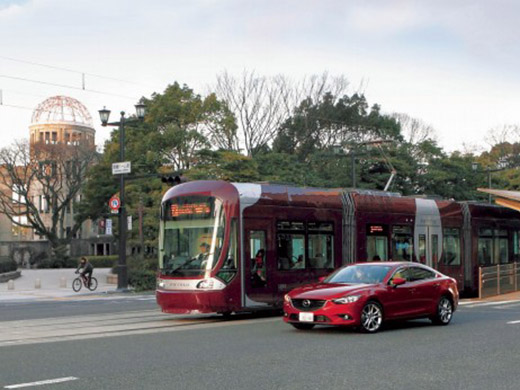 Already a leader in cutting-edge safety technology, Mazda will start trials in October of a world-unique system enabling vehicles and trams to communicate with one another. The company will also begin testing its Mazda6* ASV-5 (Advanced Safety Vehicle) on public roads in Japan.

A first of its kind in the world, the system communicates using 700MHz radio waves, allowing cars and trams to share a variety of data, including the type and location of a vehicle, the direction they’re heading, and braking and turn signal information. The ASV-5 sedan is equipped with autonomous millimetre wave and microwave sensors as well as cameras to monitor its surroundings and keep track of pedestrians, road markings, other vehicles and, of course, trams.

The purpose of the trials is to confirm the communication system’s ability to prevent accidents. They will be conducted on the streets of Hiroshima, where trams carry 150,000 people daily and, as in many European cities, represent a vital public transportation link. This innovative technology was developed by a consortium made up of Mazda, the University of Tokyo, Hiroshima Electric Railway Co. and Japan’s National Traffic Safety and Environment Laboratory.

These efforts mirror the spirit behind Mazda Proactive Safety, Mazda’s philosophy to minimise accident risk. It is the basis for the company’s i-ACTIVSENSE range of sensor-based active safety technology. Available on the Mazda6, Mazda CX-5 and the all-new Mazda3 soon to go on sale, i-ACTIVSENSE systems support drivers with recognising and responding to potential dangers, helping prevent accidents and reduce the severity if one occurs.

* known in Japan as the Mazda Atenza