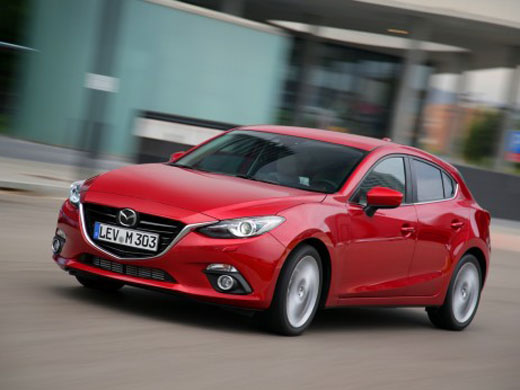 Captivating, capable and connected – the all-new Mazda3 will be the star attraction of Mazda’s exhibition at this year’s Frankfurt International Motor Show. Although it won’t go on sale in the UK until January 2014, the all-new Mazda3 has already attracted high praise from motoring media and is currently proving itself on the road during an extreme 9,300 mile ‘Mazda Route3 Hiroshima-Frankfurt Challenger Tour 2013’ endurance test from Japan to Germany.

The new model’s standard equipment redefines the word ‘generous’ for a car in the C-segment class. Mazda’s brand new connectivity concept makes the company’s all-time global best-selling model one of the first in Europe to take occupants online. Building on existing email, text and navigation features, the system safely brings an array of free mobile online content into the vehicle, including Facebook and Twitter audio feeds as well as Aha™, with tens of thousands of cloud-based stations, from radio to audio books and more.

Like the first two models of Mazda’s inspired new generation, the Mazda CX-5 compact SUV and Mazda6, the all-new Mazda3 is equipped with SKYACTIV technology and features the brand’s award-winning KODO design language. Adapted for the Mazda3’s sporty compact physique, the KODO philosophy results in an exterior that unites a bold, powerful stance expressing pent-up energy with superior build quality. Hatchback or fastback, the new shapes also save fuel – thanks to a very aerodynamically ‘clean’ design, boasting among the best aerodynamics on the market, with Cd values of 0.258 (fastback) and 0.275 (hatchback).

Convention-defying technology
Inside the cabin, Mazda’s brand new interior offers safe, ergonomic comfort. Larger than the outgoing model in most respects, the all-new Mazda3 also gets an optimised Human-Machine Interface (HMI). Highlights of the HMI include the Active Driving Display, Mazda’s new head-up display, another rarity in this class, and a new design of rotary commander enabling a safe operation of infotainment functions. The all-new Mazda3 hatchback and fastback share the enlarged 2,700mm wheelbase – the longest in the C-segment and 60mm longer than the current Mazda3’s.

A high-mileage example of the all-new Mazda3 will also be displayed on stage at the Frankfurt Show, after driving directly from the factory at Hiroshima in Japan. It will be one of eight Mazda3 hatchbacks to have completed the ‘Mazda Route3 Hiroshima-Frankfurt Challenger Tour 2013’ across Russia, Belarus and Poland. Other tour cars, which are scheduled to arrive in Frankfurt just in time for the motor show, will be exhibited in an outdoor area of the show grounds.

Mazda’s stand at the Frankfurt Show is located in Hall 9, stand B12 and the company’s press conference will take place at 14.00 hrs (CET) on 10 September.

All-new Mazda3 coming to Britain in January 2014
When the all-new Mazda3 goes on sale in the UK in January 2014, the model line-up will once again include two bodystyles – hatchback and fastback. The two styles share the enlarged 2,700mm wheelbase – the longest in the C-segment and 60mm longer than the current Mazda3’s. Both bodystyles are 40mm wider and 15mm lower than the current model, while the fastback’s boot design extends the overall length by 120mm to 4,580mm – compared to 4,460mm for the hatchback.

Despite performance-enhancing changes that normally add weight – such as bigger brakes and bigger wheels – all-new Mazda3 is lighter than the current model, with kerb weights starting from 1,200kg (fastback) and 1,190kg (hatchback), making it one of the lightest C-segment cars.

All-new Mazda3 is going to deliver some remarkable fuel economy and emissions figures. British buyers will be offered a choice of three naturally-aspirated petrol powerplants and one turbocharged diesel – all fitted with i-stop, Mazda’s idle-stop system, as standard.

The 150ps SKYACTIV-D 2.2-litre clean diesel will deliver an unprecedented combination of excellent fuel economy and responsive dynamics, while significantly reducing nitrogen oxide (NOX) and soot emissions. High performance, with 380Nm of torque at 1,800rpm, is combined with fuel economy and CO2 emissions up to 72.4mpg and from just 104g/km.