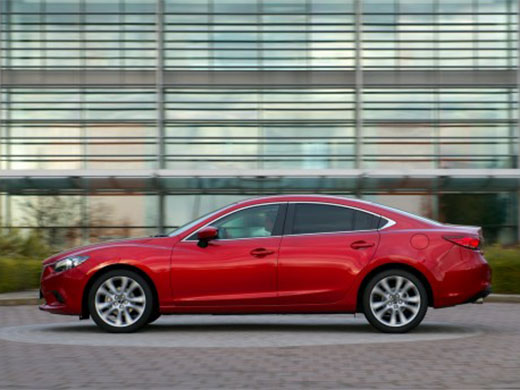 Engine modifications to the SKYACTIV-D 2.2-litre 150ps engine powering both the new Mazda6 Saloon and Tourer manual models deliver a CO2 emission reduction of 4g/km and 6g/km respectively to just 104g/km and 110g/km.

As a result, Mazda expects a further strengthening of corporate demand for the low emission model, with delivery lead times as short as two weeks compared with up to four months of some rivals.

Employers will also make savings in Class 1A National Insurance contributions, which are paid on benefits-in-kind.

Additionally, while the emissions cut does not impact on first year Vehicle Excise Duty rates, the reduction on Tourer (116g/km to 110g/km) delivers a £10 a year saving on future rates as the model drops from Band C to Band B.

Steve Tomlinson, Mazda’s Head of Fleet, said: “Mazda engineers have been able to deliver financial savings for company car drivers and businesses without compromising the model in terms of its power, performance or towing capacity.”

“Indeed, the improvements that have delivered the CO2 emissions reduction and, consequently, the company car benefit-in-kind tax savings and fuel economy improvements mean that the 2.2-litre 150ps diesel models remain among the most efficient models in the C/D segment.”

“The new Mazda6 is the no compromise choice for company car drivers. They can have power, performance and driving fun with low emissions and first class fuel economy due to our SKYACTIV technology. That cannot be obtained from rival manufacturers who have resorted to smaller engine displacements in pursuit of emission and MPG improvements.”

Tomlinson added: “Our well-established ‘fleet vehicle sold order pot’ programme, means our key Business Specialist Network dealers are able to meet corporate demand typically within 10-14 days of orders being placed for the majority of models, which is significantly better than most rival marques.”

The Mazda6 has been a fleet favourite for more than a decade and the latest version, which went on sale in early 2013, has won a clutch of honours including ‘Best Upper Medium’ model in this year’s awards from industry publications Fleet News and Fleet World.

The new Mazda6 is available with a choice of 36 models across the two bodystyles, six-speed manual and automatic transmissions and six trim levels (SE, SE Nav, SE-L, SE-L Nav, Sport and Sport Nav). Priced from £19,595 to £28,295 (OTR).