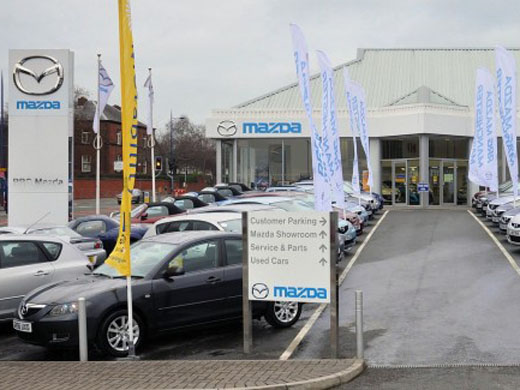 Holdcroft Mazda in Stoke-on-Trent and RRG Mazda in Salford, Greater Manchester have become the fifth and sixth franchise dealers to join Mazda’s Fleet Specialist Dealer Network, while Mazda is keen to embrace other dealers who have the desire and infrastructure to join this exclusive group.

Meanwhile, the restructuring and expansion of the Mazda corporate sales team is aimed at further supporting relationships with end-user fleet customers and strengthening partnerships with contract hire and leasing companies.

Mazda Head of Fleet Steve Tomlinson said: “We are receiving an ever-increasing the number of inquiries from businesses that want to add Mazda to their company car choice lists.”

“This is naturally leading to an increase in orders, particularly for the all-new Mazda6 and the Mazda CX-5, both of which feature our breakthrough emissions-busting SKYACTIV technology.”

Until now, four strategically located Mazda fleet centres – Arnold Clark in Stirling, JCT600 in Bradford, Norton Way in Letchworth and Johnsons in Oxford – handled approximately 65 percent of all Mazda’s contract hire and end user fleet business and by adding a further two dealerships Mazda is even better equipped to provide the excellent levels of service demanded by todays fleets, irrespective of size.

In addition to Mazda offering a price competitive model line-up embracing the brand’s established characteristics of first class performance, excellent vehicle reliability and strong whole life costs, the establishment of a ‘sold order pot’ means the Fleet Specialist Dealers are able to meet corporate demand typically within 10-14 days of orders being placed, should this be required.

This compares favourably with some other manufacturers who are quoting significant lead times on their key fleet models.

Tomlinson said: “Involving a fifth and sixth dealer in our Fleet Specialist Dealer Network gives Mazda an even better geographical spread in terms of customer proximity.”

“That in turn means that vehicles can be delivered more swiftly to customers and, importantly, reduces the carbon footprint relating to deliveries. Additionally, it means a further increase in Mazda’s fleet capability.”

“With orders for the award-winning Mazda6 and Mazda CX-5 crossover SUV ramping up, Mazda needs greater infrastructure among dealers to ensure corporate customer satisfaction is met.”

It is a similar philosophy behind the restructure and expansion of the Mazda corporate sales team.

Chris Stableford has been promoted to the newly created post of National Fleet Sales Manager and now heads up Mazda’s fleet sales team. He was previously National Contract Hire Manager.

In a further move, Jonathan Reynolds has moved from a retail role in Mazda to fulfil the new role of National Contract Hire Development Manager with responsibility for leasing company relations and fleet specialist dealers.