Mazda at 100 | A history of great small cars 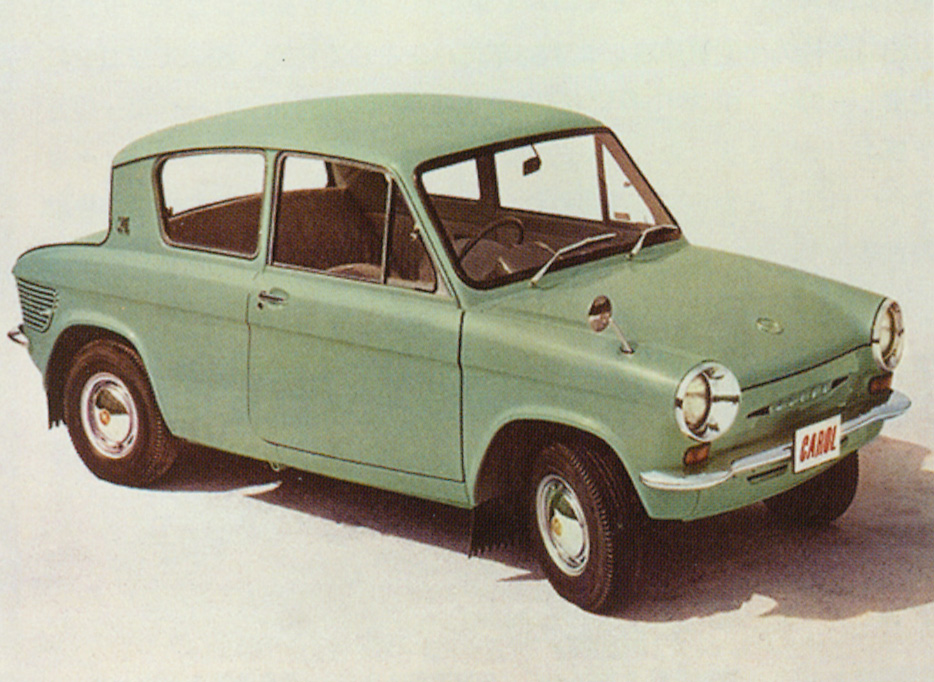 The Japanese are no strangers to small spaces. The compact house concept fashionable today around the world has long been a reality in the country’s densely populated cities where living space comes at a premium. This has fuelled a culture of uncluttered simplicity, minimalist design and the appreciation of clever condensed engineering.

This spirit of compact cleverness extended to the Japanese car industry, where the ‘Kei’ car class was introduced by the Japanese government in 1949. Short for ‘Keijidosha’, meaning light automobile, Kei class microcars had to fit within tight dimension regulations, and until 1975 have an engine no bigger than 660cc. Launched in 1960, Mazda’s first passenger car was built to these diminutive regulations, yet this didn’t stop Mazda’s engineers from creating a distinctive vehicle that had the same focus on aesthetics, reliability and comfort you’d expect from a larger car.

Despite being less than three metres long, the Mazda R360 Coupe could seat four adults and it raised the bar for microcars in Japan with attractive styling, lightweight construction and clever engine technology. At 380kg the R360 was the lightest car in the class, while its fuel-efficient four-stroke engine was quieter, cleaner and more flexible than competitors’ two-strokes. It was available with an automatic gearbox, while fitted with four-wheel independent suspension it was an early example of Mazda standing out when it came to driver engagement and handling. Both affordable and good to drive, it dominated the segment from the day of its launch, selling 4,500 cars on its first day on sale in May 1960 before going on to capture 15% of the domestic Japanese car market that year. The R360’s success was an early example of Mazda’s lightweight engineering ‘gram strategy’ and its focus on engine ingenuity to deliver success.

The success of the Mazda R360 meant that it remained on sale in Japan until 1969, but by then Mazda had launched its next successful small car: the Mazda Carol. Launched in 1962, first in a two-door format and then as the world’s tiniest four-door saloon, it was powered by one of the smallest four-cylinder car engines in history. Although similar in length to the R360, the distinctive looking Carol’s longer wheelbase and inverted rear window improved cabin space, while its sturdy monocoque body and four-wheel independent suspension made for an unexpectedly comfortable ride. Duplicating the success of the R360, the Carol was an instant hit with a two-thirds share of Japan’s microcar segment in 1962.

Mazda’s early successes in the Japanese Kei car segment meant that even as the firm expanded to develop and sell larger cars for global export it continued to build small cars for this key domestic market. The original Mazda Carol remained on sale until 1970 and in 1972 the Mazda Chantez was launched. A tiny modern looking hatchback, the Chantez’s wheel at each corner stance allowed for a compact two door four seat layout, while the 359cc engine powered the rear wheels. Originally Mazda had intended to power the Chantez with a single-rotor rotary engine, but the other Japanese manufacturers blocked Mazda’s plans for the rotary to be allowed within the Kei car classification.

After Chantez production stopped in 1976, Mazda withdrew from the Kei car market until the late Eighties when the Japanese government’s revised incentives created a boom in the category. For this Mazda revived the Carol name with the launch of the Autozam Carol in 1989. The recently introduced Autozam brand was Mazda’s domestic market youthful sub-brand, and the Carol was a rounded body front-wheel drive hatch supplied in an OEM supply partnership with Suzuki. With a new generation Autozam Carol launched in 1995, the 1998 third generation returned to wearing the Mazda badge. The fourth generation followed in 2004 and it was replaced in 2010, before the current car was launched in 2014. Today, the Carol badge has become one of the most familiar names in the Japanese small car market and the Carol sits alongside the boxy and practical Mazda Flair, Mazda Flair Wagon and Mazda Scrum Wagon in Mazda’s domestic microcar line-up.

However, the Kei car that resonates with car fans outside of Japan is the Autozam AZ-1. A miniature mid-engine rear-wheel drive sports car with gullwing doors, it had all the visual and layout ingredients you’d expect of a supercar shrunk into a car that weighed just 720kg. Produced from 1992 to 1994, it was powered by a 657cc Suzuki engine and was priced below the MX-5 to offer a unique baby sports car choice for Japanese drivers, there was even a Mazdaspeed version with a racy bodykit, plus sportier suspension, exhaust and air filter. Only sold for two years and in very limited numbers it’s one of the rarest ‘Kei’ sports cars and today is a sort after classic.

Away from the unique world of Japanese Kei cars, by the late eighties Mazda was ready to develop cars for the booming ‘supermini’ class in Europe. Launched in 1986, the practical Mazda 121 was deceptively large on the inside despite its diminutive 3,500mm exterior. Clever features included a sliding rear bench with a mechanism that could be operated from either the boot or the bench itself. It was also available with an electric canvas sunroof that could retract in either or both directions. A rounded saloon version was offered and in Japan the 121 was called the Autozam Revue.

Even more practical was the Mazda Demio launched in 1996, which brought subcompact MPV-like packaging with additional headroom, variable seating and an extra-wide rear hatch. Renamed the Mazda2 in Europe, the second-generation was launched in 2002, its clean lines, more modern interior and wider engine choice meant it was a far more rounded offering that began to establish Mazda in the crucial European small car ‘B Segment’.

The new-generation Mazda2 that arrived in 2007 adopted a smaller, more aerodynamic hatchback look and moved away from the boxier mini-MPV concept of previous generations. Far more suited to evolving European tastes for desirable and good to drive small cars, the third-generation Mazda2 was a landmark small car for Mazda.

A full 100kg lighter than its predecessor with improved the suspension, it established the Mazda2’s reputation for being one of the best handling superminis in the market. Named 2008 World Car of the Year, engine choice included 1.3 and 1.5-litre petrol units, plus a 1.4-litre diesel. Away from Europe a Saloon version was offered in lots of Asian markets and was a big seller in Australia and Thailand, while the Saloon also introduced the Mazda2 to key markets like the United States and China. A truly global small car, the third generation Mazda2 was assembled in Japan, China, Thailand, Columbia and Vietnam.

It was also a test-bed for innovation. A limited run of 100 battery-electric versions was offered in 2012 in Japan through a leasing programme. And the following year, the company almost doubled the Mazda2 EV’s range by adding a small multi-fuel rotary engine as a range extender – a system under consideration for new EVs like the Mazda MX-30.

The fourth-generation Mazda2 was launched in 2014 and was the first small car developed with Mazda’s Kodo Design philosophy. Visually, this attractive supermini took its inspiration from the Mazda Hazumi Concept car shown at the 2014 Geneva Motor Show. Named 2014-2015 Japanese Car of the Year, the fourth-generation Mazda2 set new standards for technology, safety, style, quality and driver appeal in a small Mazda. Like its predecessor, the Saloon variant ensured global appeal with huge sales in Asian and Australian markets and other regions where small saloons are popular. Produced in Japan, Thailand and Mazda’s Mexico plant, while this generation of Mazda2 was not sold in the United States, a rebranded version was sold to American buyers as the Scion iA and Toyota Yaris Sedan.

Updated through its lifespan, today’s 2020 Mazda2 is a key member of Mazda’s line up in Europe and it remains a popular choice in the UK, where the Mazda2’s combination of big car quality, refinement and technology is match to a light chassis, keen normally aspirated petrol engines and engaging handling. More efficient than ever, 2020 Mazda2s fitted with a manual gearbox feature Mazda M Hybrid mild hybrid.

Whether it’s the Japanese Kei cars of Mazda’s earliest days, an eccentric mid-engined sports car like the AZ-1 or today’s award-winning Mazda2, the Mazda small car has always been a place where Mazda’s engineers have explored their passion for weight reduction, great design and innovative engine technology. All of which is part of the never ceasing effort to deliver the best possible small car ownership experience.