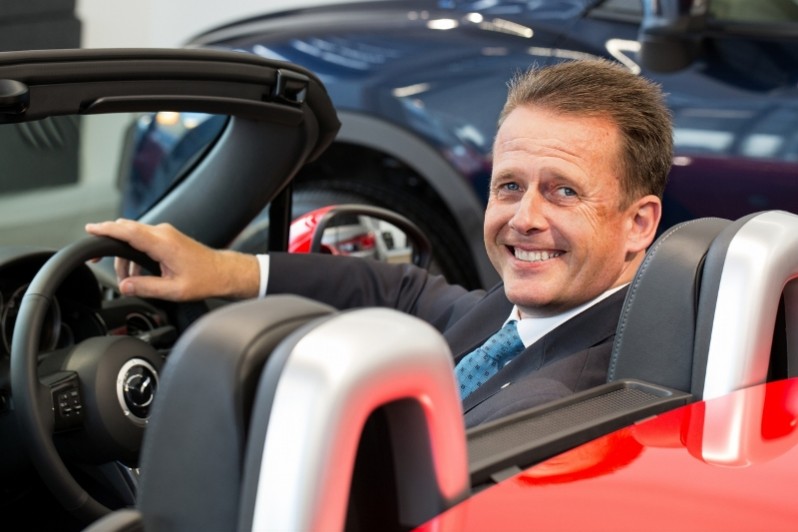 Mazda’s UK dealers, some of whom have been with the brand for more than 40 years, face their busiest ever year in 2015 and need to make sure they are fully prepared to take advantage of what could turn out to be an exceptional year.

That’s the message from Mazda UK managing director Jeremy Thomson in a New Year call to arms for the company’s 137 dealer partners.

With three totally new models and two major upgrades launched in a little over six months, dealers can expect to be busier than ever and need to make sure they have the right resources they need, he said.

Dealer profitability improved throughout 2014, said Thomson, adding “those who get it right in 2015 will be even better rewarded.”

“There’s the chance for an exceptional year if they approach next year’s planning in the right way, looking carefully at launch budgets, staffing levels – both in the showroom and workshops – and marketing plans,” said Thomson. “There’s never been a better opportunity.”

The year kicks off with major revisions to the Mazda6, a car which has already delivered remarkable success, accounting for up to one in five of all retail sales in its segment, outperforming models from the mass-market manufacturers, as well as proving hugely popular with company drivers.

“The improvements, especially to the interior, will allow us to compete effectively with mainstream and premium brands” said Thomson.

Next up comes the all-new Mazda2, followed by an upgrade for the Mazda CX-5, demand for which, three years after its launch, still outstrips supply making it one of the most sought-after crossovers on the market.

Mazda then enters a completely new segment with the mid-year launch of the B-segment All-new Mazda CX-3 crossover SUV with the all-new Mazda MX-5 arriving later in the year.

By then the all-new Mazda3, launched at the beginning of 2014, will become the “oldest” car in the new Mazda line-up – it also means that 97 per cent of all Mazdas sold in 2015 will be SKYACTIV models, bring unprecedented levels of fuel efficiency and performance to Mazda customers.

“We said we would deliver 20 per cent sales growth in 2014 and we have. For 2015 we’re going to see sales grow by another 10 per cent, taking us to around 45,000 sales and a market share of 1.8 per cent in what is predicted to be a relatively flat market” said Thomson.