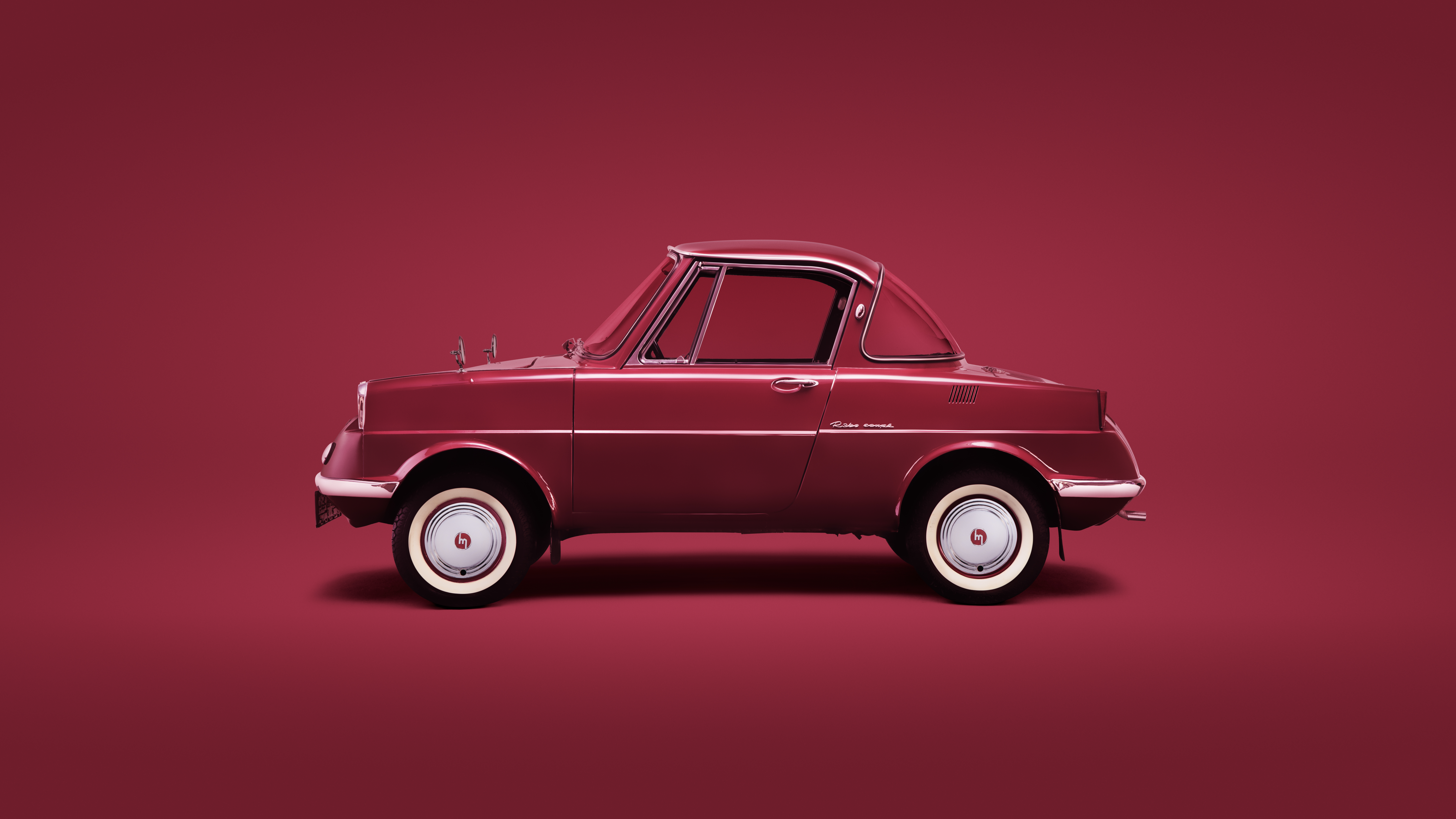 Lightweight engineering has a long tradition at Mazda, dating back to its very first passenger car. A loveable little coupe launched 60 years ago, the Mazda R360 instantly set a new benchmark for microcars in Japan, outshining the competition from day one. It also defined Mazda’s DNA as a maker of stylish, efficient and above all fun-to-drive vehicles. The parallels between then and now are many.

Little known outside of Japan, the Mazda R360 was a smash hit at home. The company’s first passenger car sold 4,500 units on the day it way launched in May 1960 and captured almost two-thirds of Japan’s burgeoning “kei car” (microcar) segment by the end of that year, not to mention more than 15% of the entire domestic car market.

It was a watershed moment for Toyo Kogyo, as Mazda Motor Corporation was called at the time. For the truck manufacturer, it was the beginning of a new era producing unconventional cars.

The R360 wasn’t the first kei car on the market, but it immediately became the most popular thanks to its stylish looks, lightweight design, driver engagement and affordability – characteristics of today’s Mazdas.

It was very efficient, too, featuring a four-stroke engine that was quieter and cleaner as well as more fuel efficient, durable and user-friendly than the two-stroke powerplants used by the competition. The R360’s 360cm3 V-twin put out 12kW/16PS, which doesn’t sound like much, but only needed to move 380kg. The top speed was 90km/h: respectable enough for the class and plenty considering road conditions in early 1960s Japan.

Making an appealing car with such limitations called for ingenuity. Restricted on engine size, Mazda turned its attention to balancing the aspects it could control, such as design innovation and weight. It was the birth of the carmaker’s gram strategy, an obsession with shedding mass. Associated most prominently with the legendary MX-5 roadster, this approach is integral to all Mazda models today.

The result was the lightest vehicle in its class and indeed the world’s lightest four-seater. Mazda looked into every possibility to reduce weight. Under the boot of the rear-engined R360, the engineers chose aluminium cylinder heads and magnesium alloy for the transmission casing and oil pan. The bonnet was also made of aluminium, while the rear window used a specially developed plexiglass. The frameless monocoque chassis structure, meanwhile, offered additional weight benefits as well as above-average crash safety. It was an early lesson from Mazda in lightweight engineering – today a central element of its Skyactiv Technology.

Unconventional from day one

Lightness enhanced the R360’s driving behaviour, as did other features like its unique four-wheel independent suspension, whose lightweight setup reduced vibrations and improved ride comfort, especially on poor surfaces. In addition to the four-stroke engine, the R360’s four-speed manual and optional semi-automatic transmission – Japan’s first torque-converter automatic – set it apart from the competition’s three-speed manual offerings.

As a result, the R360 was engaging and fun. Channelling the spirit of Jinba Ittai, the connection between driver and car, it delivered a superior driving experience for a microcar of that era. The joy of driving is one thing Mazda has never forgotten. Another is a focus on looks: While most kei cars at the time were sedans or wagons, Mazda designed a stylish coupe. Many more stunning models would follow, from the Cosmo 110S and Luce R130 to the Mazda RX-7 and RX-8, as Mazda’s design DNA evolved into today’s line-up of award-winning Kodo vehicles.

Yet despite the innovative engineering and relatively costly materials, efficient production enabled Mazda to keep the price for the R360 manual down to ¥300,000 (then around US$830). Both attractive and attainable, it dominated the kei car market from the day it was launched.

The R360 helped define Mazda’s unique carmaking philosophy. The focus on innovation, balance, lightweight engineering and driving fun still prevails 60 years later. And its insistence on putting soul into its products, even if their primary purpose is merely to serve as affordable transportation.