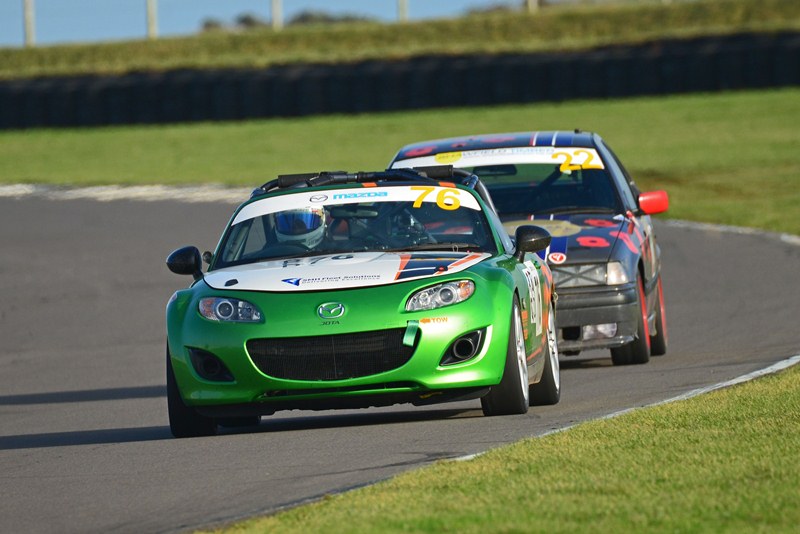 Mazda UK is proud to once again be a supporter of Race of Remembrance, here’s all the news ahead of the 2019 race from Mission Motorsport:

Mission Motorsport, the charity that supports the rehabilitation and employment of former military personnel, has announced a star line up in the unique Race of Remembrance at Anglesey circuit.

Sophie Burt joined the Army in 2007 and having gained her HGV 1 licence at 18 was posted to military logistics in support of the British Army in Germany. In late 2009 she spent six months in Kandahar on Operation HERRICK where her camp was under mortar and small arms fire daily. Returning to Germany in 2010 she was posted to 6 Supply Regiment in Gutersloh where she fulfilled a variety of roles. As a mark of her ability and professionalism, she was promoted to Corporal in 2013 aged just 23.

Health issues including PTSD meant she was forced to surrender her driving licence in 2016, isolating her from friends and family, and was downgraded and signed off from work. She battled to recover and came to Mission Motorsport in early 2017 where, she says, “I found a new family that helped me focus and gave me hope and quite honestly saved my life.” In January 2018 she drove in the Live Action Arena at Autosport in front of thousands.

Dario returned to motor racing, albeit as an amateur, at the 2019 Goodwood Revival – the Race of Remembrance is the second race since his comeback. The squad will be driving a Mazda MX-5 prepared and run by Mission Motorsport employees and charity beneficiaries.

Marino began a successful racing career in the late 90s. He won the GTO Championship in British GT, raced for numerous factory teams including Panoz, Acura and Ford, and has raced at Le Mans on multiple occasions. He’s the 2013 ALMS LMP2 Champion and took overall victory in the prestigious 12-hours of Sebring in 2014. He continues to race sports cars at the highest level and finds the time to be an official development driver for Singer – the brand that restores and modifies ultra-high-end Porsches.

“It’s a real honour to race with Sophie and Mission Motorsport,” says Dario Franchitti. “I have a great appreciation for the charity and while I’ve never raced at Anglesey before I can’t wait to get out there.”

Marino Franchitti added: “There is no event like the Race of Remembrance. It really does make a huge difference, and I can’t wait to join my brother and Sophie in this year’s race.”

James Cameron, CEO, Mission Motorsport stated: “I’m still pinching myself. To have Dario, Marino, Dickie and Jamie join Sophie in a team run by Mission Motorsport will not only make a huge difference to her but also shine a light on a unique event that truly aids the recovery journey of so many others.”

Richard Meaden, co-founder of evo magazine and one of the most respected motoring writers in the world, is also a successful racer – with a win at the Goodwood Revival on his CV. He has also competed in the Nürburgring 24 Hours and the Pikes Peak International Hill Climb.

“It’s a pleasure to share the car with Dario, Marino and Jamie – but most importantly with Sophie. This shows just how effective Mission Motorsport is in assisting those who most need it,” says Meaden.

Clarke, the 2019 Ferrari Challenge UK champion, swaps a mid-engined supercar for a front engine sports car but is equally relishing the challenge: “To be in a team that’s crewed by Mission Motorsport and to share a car with Sophie is a real honour.”

The 12-hour Race of Remembrance hosts over 50 teams, taking place at the Anglesey Circuit in North Wales over the weekend of 9-10th November. Mission Motorsport will be running four of these teams, crewed by over 40 charity beneficiaries in a variety of roles across the event – all of whom are working towards individual recovery goals.

Now in its sixth year, the Race of Remembrance is the culmination of the Charity’s sporting year and raises awareness for the recovery and rehabilitation of those affected by military operations. The race is suspended at 11am on Remembrance Sunday for a unique pitlane remembrance service, then restarted to its eventual climax at approximately 1500 on the same day.