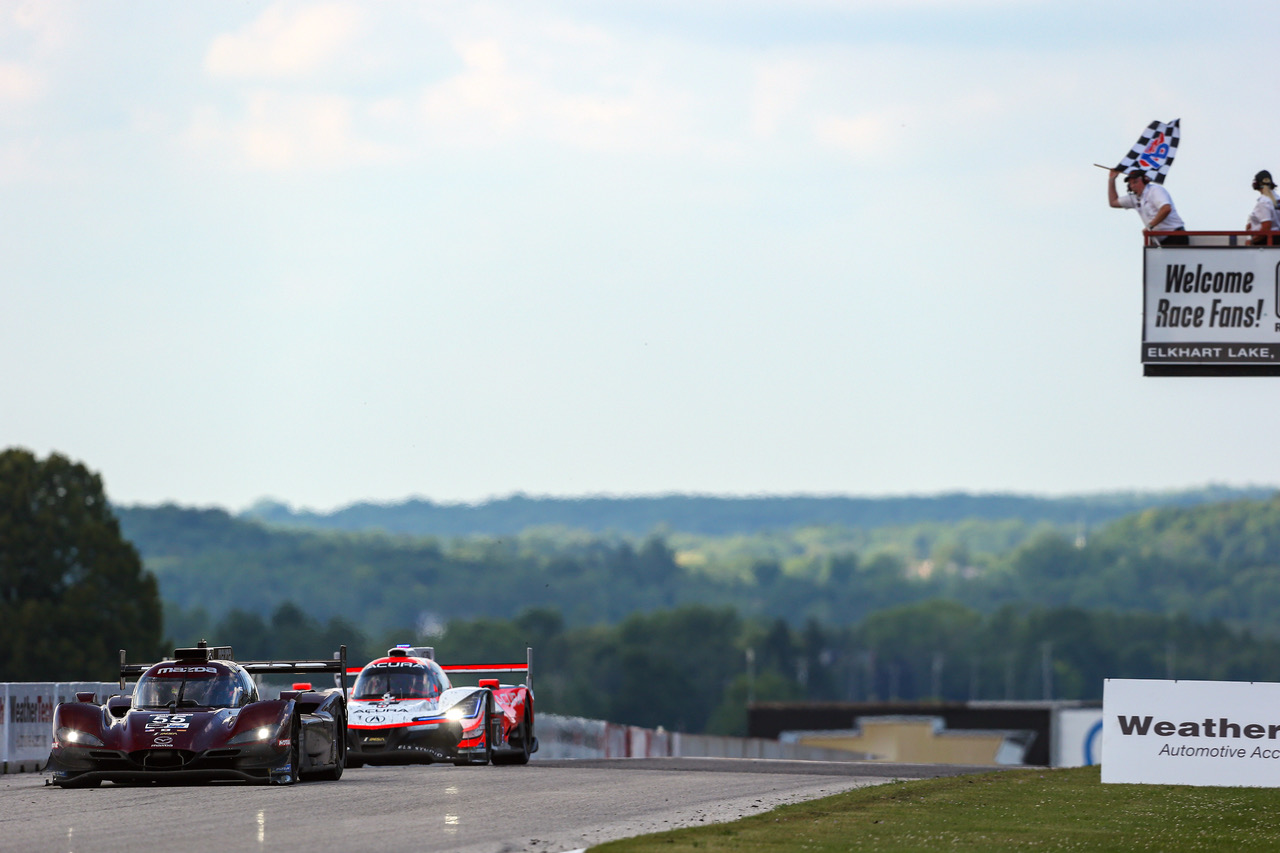 The No. 55 Mazda RT24-P scored its second victory of the season after winning at the Sahlen’s Six Hours Of The Glen in June. One week later, the No. 77 Mazda RT24-P driven by Oliver Jarvis and Tristan Nunez was the winner at Canadian Tire Motorsports Park. The victory at Road America also unofficially moved Bomarito to third position in the championship standings in the Daytona Prototype international class, and Jarvis and Nunez to fourth.

After qualifying in third and fourth place, Jarvis and Bomarito maintained their positions behind the first and second placed cars throughout the opening stint before swapping positions before the first pit stops. In the middle stages of the race, the two Mazda advanced to second and third positions. Tincknell, who took over from Bomarito after the No. 55’s second stint, executed a daring pass for the lead of the race on the outside of Road America’s turn one on the 37th lap of the race which would prove to be the race-winning move.

In the closing laps of the race, Tincknell withstood pressure from the second-placed car and the No.77 Mazda RT24-P to take the victory by a narrow 0.227-second, with Jarvis in third. The No. 55 Mazda RT24-P led a total of 44 laps of the race. Jarvis set the fastest lap of the race with a 1:51.133 (131.128 MPH), a new race lap record for the DPi class. The race unoffically set a new distance record for an IMSA race at Road America by seven laps, completing 83 laps (335.98 miles) in two hours, forty one minutes and 43.1 seconds.

The next round of the IChampionship will be at WeatherTech Raceway Laguna Seca on September 13-15.

“I almost can’t believe that here we are celebrating a third victory in a row for Mazda. This shows how much everyone at Mazda Team Joest, Multimatic and AER has transformed this Mazda RT24-P. We felt that we had cars for third and fourth place, but maybe with some clever strategy and use of yellow flags we could have a chance for something better, but all four of our drivers put the cars in a position to win today in a race that had no yellow flags. It was a great day for Mazda and all the Mazda dealers, employees and customers – several hundred of which were on site here at Road America. And to win here at Road America, the racetrack where I grew up, is an incredible feeling for myself and my family.”

“What a day, what a race. This is huge for Mazda, for Mazda Team Joest, and for Harry and myself. We came into this race thinking that we didn’t have the fastest cars in the race but the Mazda RT24-P did so well over a long run. It was a flat out race with no cautions, and it was really critical to manage traffic, manage our tire wear, and to manage our fuel numbers. We were pushing like crazy to keep pace and taking every opportunity to build gaps in traffic. This one, in a way, feels more rewarding than our first win because that was our race to lose and here we had to fight so hard.”

“I couldn’t believe when we took the checkered flag in first. I had tears in my eyes on the cooldown lap. We had been close all weekend but thought that third place would be a really strong result, but once I took over the car from Jonathan and was able to stay on the back of the two leaders I thought that maybe there was a chance. When I got to the lead, from that point on, I had to manage the traffic as best as I could but it was really hard the last three laps and the other cars caught back up to me. Luckily it still worked out and here we are with the third straight win for Mazda. Mazda Team Joest did a fantastic job to give us a fantastic Mazda RT24-P, and our engineer made great calls all weekend.”

“This was another great day for Mazda and everybody at Mazda Team Joest, especially for our teammates and the crew of the sister car – congratulations to them and the crew on an amazing victory. This program continues to build momentum and deliver results, and that is a result of the team effort that everyone has put in. We had a really strong race today, and perhaps if we had one or two more breaks in traffic, we might have been able to get our second win but we are thrilled for Mazda to get their third straight victory and for us, we are really happy to have our third straight podium finish.”

“It’s hard to believe that we are on the podium again and Mazda has won its third straight race. This just goes to show how much hard work, passion, and loyalty is involved in this program. We had a really strong race today, and Olly and I were both pushing as hard as we could all race. Road America is a track where traffic can really make or break you, and unfortunately for us it worked against us a few too many times but I am really excited to be on the podium for the third straight time and for Mazda to be celebrating another victory.”