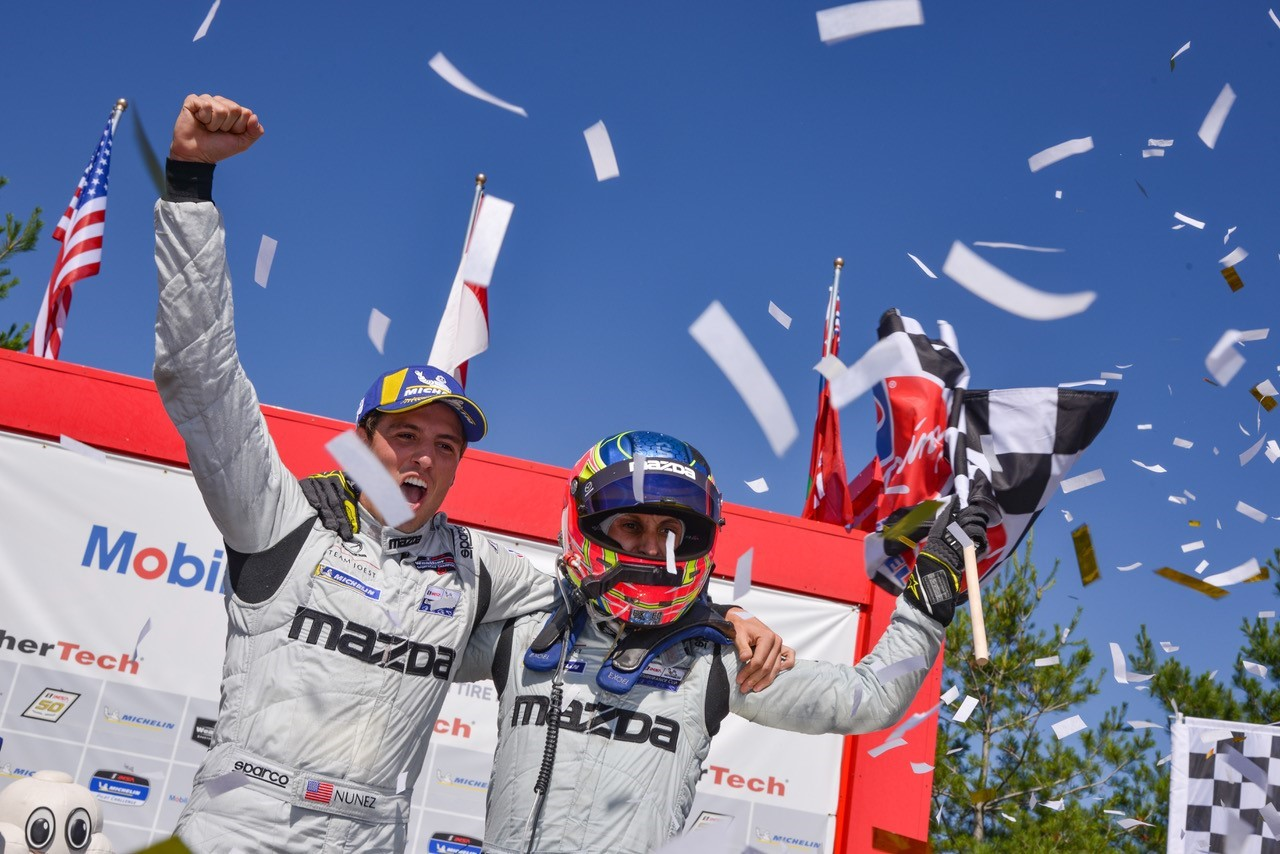 Oliver Jarvis and Tristan Nunez scored their first victory in the Daytona Prototype international class, with their No. 77 Mazda RT24-P crossing the finish line 1.699-seconds ahead of the No. 55 Mazda RT24-P of Jonathan Bomarito and Harry Tincknell.

With Bomarito at the wheel, the No. 55 Mazda RT24-P started the race from second position and moved into the lead on the eighth lap while Nunez, from fourth position, advanced to third position during his second stint. Bomarito and Tincknell would dominate most of the race, leading 87 total laps. At the final stop, a broken wheel gun slowed the pit crew of the No. 55 Mazda RT24-P, allowing the No. 77 Mazda RT24-P to inherit the lead and Jarvis led the field for thirty laps to the finish line.

For Jarvis and Nunez, their victory at CTMP was their third podium of the season after finishing in second position at Mid-Ohio and Watkins Glen, while second place also represented the third podium finish of the season for Jonathan Bomarito and second for Harry Tincknell.

The next round of the IMSA WeatherTech Sportscar Championship will be August 2-4 at Road America in Elkhart Lake, Wisconsin.

“This victory is for all the Mazda fans! I’m so proud of the Mazda Team Joest crew and everyone at Multimatic and AER for scoring these two wins in a row. It has been a complete team effort, with flawless execution from all four drivers, from the pit crew, from the engineering staff and from everyone at Multimatic and AER. I’m thrilled for Tristan and Olly that they are finally able to celebrate their first victory, and I almost can’t believe that we have another one-two finish for Mazda. Jonathan and Harry dominated all day, and they are every bit as deserving of this victory as Tristan and Olly. We’ve said all along our goal was to achieve success for the Mazda brand and for the people who buy, sell and race Mazdas so this past week has been a dream come true.”

“Second is okay as long as there is another Mazda in front of us! It was our turn to be second today. But man, what a crazy two weekends this has been. I was kind of bummed that there was another race so quickly because we wouldn’t be able to celebrate the win for very long, but to come here and get another one, it doesn’t get much better than this. I’m super excited for the whole team. Mazda has worked years for this and to have two one-two finishes back-to-back, it’s a dream. We had a good, intense battle with the Penskes in the beginning and I was able to get by. After that, it was just a matter of traffic management. Unfortunately, we had a little bit worse pit stop than the 77 car and they were able to jump us. But it all worked out well with a Mazda one-two. Hopefully, we’ll maintain this crazy momentum after a few weeks off when we get to Road America.”

“One-two is a great result – that’s what we came here for. It’s a dream to get a one-two, so to do it two weeks in a row is amazing and shows what an Incredible job everyone at Mazda Team Joest and our partner, Multimatic, have done. The car was built only an hour down the road in Markham and we do all our sim work there, so to get this result here is fantastic. We dominated today and led just about every lap, so it’s unfortunate circumstances in the pits that kept Jonathan and I from the win, but no one could touch Mazda today.”

“This was a monster team effort. Forget which car won – this is two one-twos for Mazda. Results like this have been a long time coming. It’s the culmination of so many hours back in the workshop by the Mazda Team Joest boys and girls, by Multimatic and AER, to finally achieve our goal. To repeat it the next weekend is amazing – we’re going to enjoy this. There’s still a long way to go in the championship and we want more wins. The Penskes put up a heck of a fight and it was a fascinating battle, given the different strategies. We had great pace today and a fantastic Mazda RT24-P. I’m not sure how it would have played out without the safety cars, but it was definitely down to the Penske cars and our sister car. They were amazing all weekend, but this is a victory we’ll celebrate as a team.”

“It doesn’t get much better than this. I got to witness Mazda’s first win in the Prototype class, and now to have one myself with Olly is a dream come true. It’s something I’ve been looking forward to my whole career. We ran a good strategy today and there was some aggressive racing, but we tried to not too any damage and keep the car clean. Leena Gade was on the radio running our strategy and engineering the car, and she did an amazing job. It’s an honor to work with her. This result shows the hard work and dedication that everyone on this project has put it, and it’s all falling into place now.”