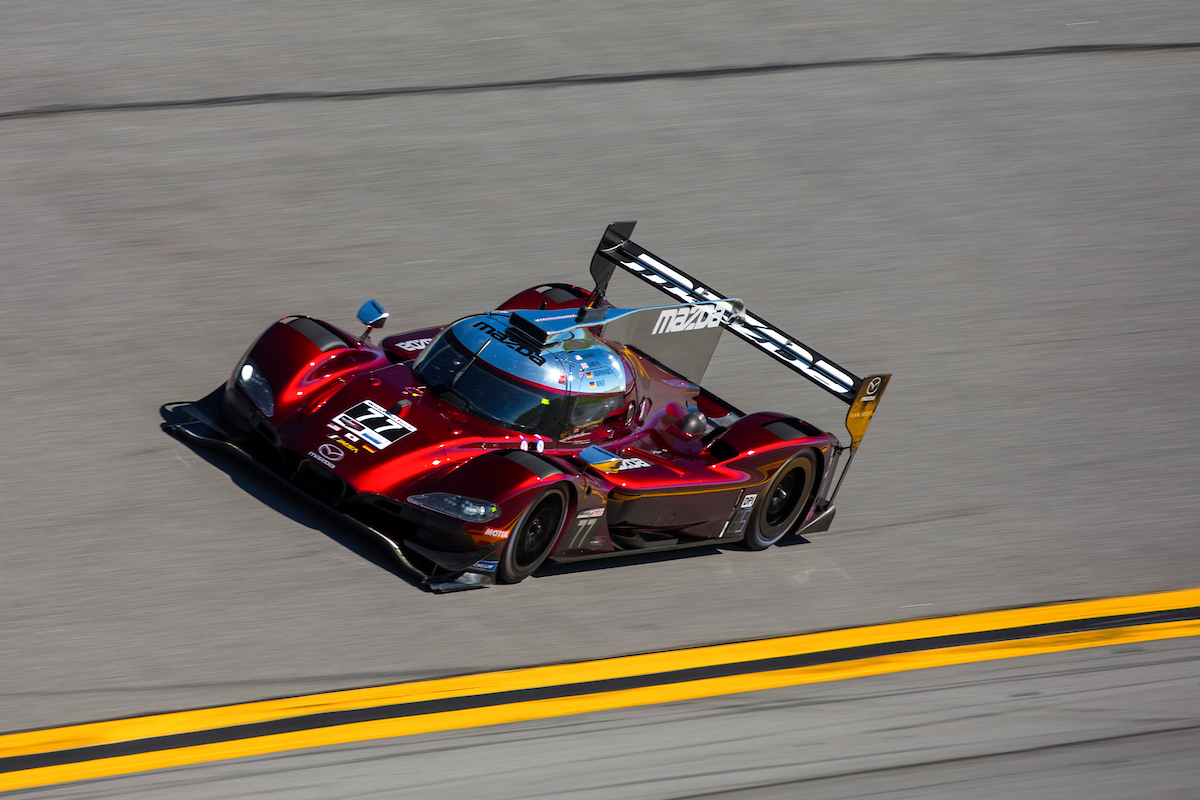 While one Mazda RT24-P led and the other ran in the top-three, neither would see the finish of the grueling Daytona 24 Hours, but they demonstrating record-breaking speed during the race week.

The number 77 Mazda set a new track record and was driven to a pole position in Thursday afternoon’s qualifying session by Oliver Jarvis. At the start of the race, he leapt out to the lead in the car he shared with Timo Bernhard, Tristan Nunez and Rene Rast. The number 55 Castrol Mazda RT24-P that qualified in fourth place by Jonathan Bomarito, and was shared by Olivier Pla and Harry Tincknell, contended for the lead throughout the early hours of the race.

Leading throughout the opening six hours of the race, with Jarvis, Nunez, and Rast taking turns leading the race, at just past the six-hour mark, with Bernhard at the wheel, the number 77 car was forced to retire from the race with a mechanical problem.

The number 55 Castrol Mazda RT24-P lost three laps just past the six-hour mark of the race after a visit to the garage for repairs. Bomarito, Pla and Tincknell cycled through the car afterwards, making up two laps and nearly getting back to the lead lap in the early morning hours. However, after an incident in the race’s 14th hour, the car was forced to retire from the race.

Mazda Team Joest are already focusing on the next round of the IMSA WeatherTech SportsCar Championship, which will be the Mobil 1 12 Hours of Sebring, at Sebring International Raceway in Sebring, Florida from the 14-16th March.

“While it is disappointing that we didn’t see the checkered flag, our Mazda Team Joest crew and drivers can leave with their heads held high that they had put together an effort that ran at the front and was a contender for the victory at Daytona. Our Mazda employees, partners, owners and fans deserve to enjoy success, and our approach was to race from the front and push ourselves and the competition as hard as we could. We’ll learn everything we can, put a plan into place to address the issues we had here and go for it again at Sebring. Racers are optimistic, and we are already looking ahead to Sebring to show what we can do.”

“I think we were all hoping this was going to be our breakthrough race, but even though we didn’t finish this race, it was a big step forward for Mazda Team Joest. We had some misfortune early in the race, but we all battled back to the lead lap and I think would have been mixing it up for the win. We are more motivated than ever to get a victory for Mazda.”

“Obviously, I’m very disappointed to end our race early as the team at Mazda has been working so hard. We had a very quick Mazda RT24-P and no doubt we would have been fighting for victory at the end. Motorsports is cruel sometimes, but it’s part of our sport! A huge thanks to all the team, Multimatic, and my two teammates Harry and Jonathan. We’ll be back in Sebring to win!”

“This is a really disappointing result, but I can’t help but be proud of everyone at Mazda Team Joest for their effort this week. Mazda showed this month that we can compete at the front with the strongest manufacturers in IMSA. Our Mazda RT24-P is fast and ran at the front of the toughest race in North America. A huge thanks to everyone who supported us – the love and support for Mazda this past month has been incredible, and we will deliver many great results this season. I’m so excited.”

“We are leaving Daytona disappointed with the end result, but we can be extremely proud of our performance. Up until the issues we experienced, we were running extremely strongly, always in the top-four and definitely had the pace to fight for the win. We have a lot of work to do ahead of Sebring but it’s important that we take the positives away from Daytona – of which there were many! I just want to say a huge thanks to the whole team – Mazda, Mazda Team Joest and Multimatic who have worked incredibly hard to give us such a fast, competitive Mazda RT24-P.”

“It’s a very tough result, because we had a winning car – both Mazda RT24-Ps could have been a factor at the end of the race. Our car led from the start, and the guys gave us great pit stops and a car that could run at the front. It worked really well throughout the stint and I was really excited to get back in for my next stints. We’re so close to getting that first win, and even though we’re disappointed I can’t wait for Sebring.”

“We definitely had good pace in the Mazda RT24-P and from the start of the race, we were always in a good position to fight for a good result. Obviously, I am disappointed for everyone involved with Mazda Team Joest that the issues we had kept us from having a good result.”