by: Peter Birtwhistle in Top Stories 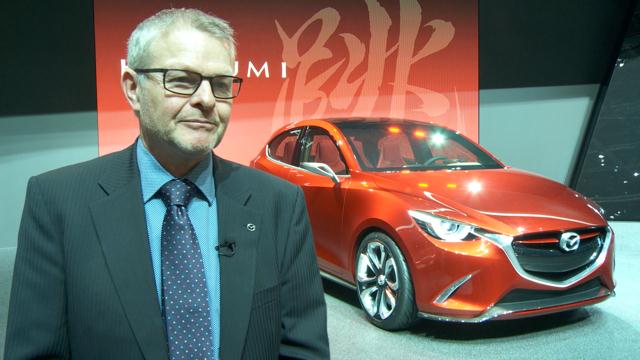 Mazda’s chief designer Peter Birtwhistle goes to motor shows all over the world. Here he explains why Geneva is his favourite.

You get the chance to pick up on trends. Just as we have our KODO design language, so other manufacturers seem to be getting increasingly focused on what their brand represents and the whole design expression. For example the VW Group is getting really into precision: look at the creases on the sides of the some of the SEATs. It’s the company demonstrating how good it is at tooling. It’s almost like a fetish with it!

The Geneva Motor Show is pretty much the favourite show for anyone who works in the car industry. It’s the start of the year. January and February are pretty grim months so this is like the arrival of spring. It’s as if the car industry is opening its doors optimistically.

3. Attracts visitors from around the world

Everybody who’s anybody in the car industry comes to Geneva. Whether they’re from the US or Australia they’re at Geneva. That’s not necessarily the case with Frankfurt or Paris. I saw Peter Horbury here; I went to college with him. I just saw Moray Callum too. He was our boss at Mazda and I remember him when he was at the Royal College of Art. We go back a long way.

It’s a great opportunity to get inspiration. If I had to narrow it down, the one car I found really interesting at the 2014 show was the Citroen C-Cactus. That’s really cool. If you’re doing a practical car it’s generally either a van or a wagon depending on the market. You buy them because you need them. That car looks practical but it’s aimed at a lifestyle market.

My birthday is on March 7 so I always tend to spend that here. In fact I dread to think how many I’ve had here!

My ex-wife’s uncle had a restaurant here. It’s just outside the town and I used to stay there rather than getting a hotel. It was called the Restaurant du Chateau; I don’t think it exists any more but it was always pleasant catching up with them.

I like going round the watch shops, looking at watches I can’t afford. I’m into watches but I’ve yet to buy an expensive one and I’m not going to go down the Chinese fake watch route, no matter how good they are. A nice classy watch isn’t necessarily something you can apply to car design. I quite like some of the more jokey ones. If you’ve got analogue dials in a car, sometimes the faces of classy watches don’t quite translate.

In the town itself there are always plenty of opportunities to see some pretty exotic cars in numbers that you don’t see on the road anywhere else, apart from London perhaps.

It’s a very compact motor show. Unlike Frankfurt or Paris it’s easy to see and understand. If I say I want to meet you on the Jaguar stand, I’ll be there in a couple of minutes. You don’t need an entire hall full of Volkswagen Golfs like we see in Frankfurt.

Let us know what you like about Geneva below.