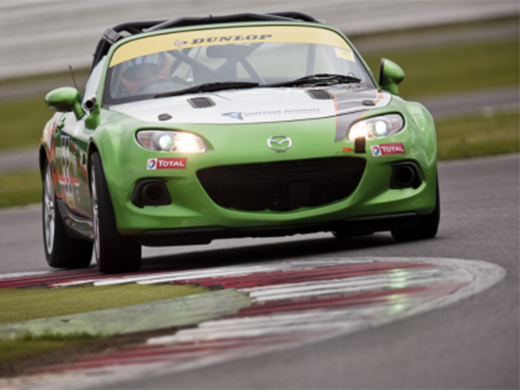 This weekend two of Mazda’s iconic MX-5 sports cars will contest the Birkett 6 Hour Relay Race at Silverstone. This race, first run in 1951, is the oldest established race in Britain and is celebrating its 62nd year.

The relay race is a challenging test of endurance featuring 60 teams of cars and drivers from all categories of club racing, including vintage sports cars, saloon cars and modern sports racers. This year Mazda will bring the race into people’s homes with a live link to a camera in the race cars. Starting at 11:45 on Saturday 26th October visitors to www.mazdasocial.co.uk will be able to watch the race from a driver’s point of view.

The team comprises of six drivers, each driving for an hour with the winning team being the one that completes the most number of laps in the six hours.

“Mazda is thrilled to get back on Silverstone’s famous GP circuit with our iconic roadster,” comments Graeme Fudge, PR Director, Mazda UK. “Its lightweight body, outstanding handling and agility will benefit us in a long distance race as we will experience less tyre wear and better fuel efficiency than our competitors.”

All the high-octane Mazda racing action during the Birkett 6 Hour Relay Race will be available to watch here on a live stream throughout the race on Saturday 26 October with coverage starting from 11:45am.

Mark Ticehurst, aged 42 from Hassocks, West Sussex. Mark is married with two children and has lived and breathed motor sport since he was old enough to prop himself up in a kart. Mark spent the first ten years of his career honing his skills in 100cc Karts where he recorded numerous victories and championships. In 1995 he recorded his first major victory in the Alfa Romeo Championship where he finished the season at the top of the leaderboard following 12 victories and five second places. He successfully defended his title in 1996, while in the meantime earning two victories in three races in the Caterham K Championship.

Following that he took part in the Vauxhall Vectra Sri V6 Challenge and landed a works Vauxhall Drive in 1999 for Triple Eight Race Engineering, becoming the first ever driver to win a race in an LPG fuelled race car, securing four wins and the Championship. He has also competed in the MGF Cup and Porsche Open Championships.

In 2005 he landed his first role at Mazda where he drove a Mazda RX-8 in the S1 Production Endurance Racing Series and collected five class wins and three class seconds. He also competed in the 24hr Silverstone Britcar race.

Following various other Mazda testing roles he then drove an MX-5 in both the Britcar 4hr Snetterton Endurance Race and Britcar 24 Hour Silverstone race both in 2010.

Over the following two years, Mazda evolved its MX-5 into a GT4 car and last year it competed in the 2012 British GT series. The car was piloted by Mark along with teammate Owen Mildenhall and had a hugely successful first year campaign, with the duo managing to finish fourth overall in class with a couple of podium finishes along the way.

When Mark is not racing he enjoys snowboarding and wakeboarding.

Owen Mildenhall, aged 40 from Bexleyheath, is a motoring journalist and racing driver. His current job is senior road tester for Auto Express weekly car magazine, where he has worked for ten years. Apart from producing huge amounts of copy to tight deadlines, Owen also tests virtually every new car that is manufactured.

Before picking up a pen, Owen had an impressive career as a racing driver and still does his best to drive competitively whenever he gets the chance.

His first taste of motorsport came back in 1993 at the Jim Russell Racing Drivers School. From there he moved onto the British Formula First Series. This was followed by stints racing in British Formula Ford, where he was the First Division Champion in 1997 and the FIA Sportscar World Series in which he drove the Pilbeam-Nissan SR2, setting the lap record at Magny Cours. Owen has also raced in the Porsche Carrera Cup and one of his career highlights was taking part in the 2010 24 Hours of Nurburgring where he co-piloted the Lexus IS-F, eventually finishing in 59th place overall and a very impressive 4th in class.

His partnership with Mazda first came about back in 2005, when he was asked to take part in two Silverstone 24 Hour races driving the Mazda RX-8. Since then Owen has also been involved with developing the MX-5 GT4 racecar right from its birth, culminating in contesting the 2012 British GT series alongside Mark Ticehurst. The partnership was a hugely successful one, especially considering it was the pair’s first season with two podiums and  fourth overall in their in class.

Owen said that he loves racing for Mazda because there is so much enthusiasm for racing within the company.

When he isn’t travelling around the world testing cars, writing in-depth features or racing, Owen enjoys cycling, learning about history and if he could afford it, classic cars!

Victoria Parrot, got into motoring journalism in order to indulge a love of both cars and writing. After seven years working for Autocar carrying out various roles including; web reporter and road tester, she moved to What Car? last year where she assumed the role of deputy road test editor.  In her words, not ours, her meagre race experience amounts to the occasional karting event and a brief foray into ‘proper’ racing with Ginetta in a round of the G40 Challenge.

Jethro Bovingdon is a freelance motoring journalist and Contributing Editor to Evo magazine. His first taste of racing came in the brilliant Caterham Academy in 2003, where he finished runner up after winning two of the four races – the early rounds were sprints to ease the learning curve. Since then he’s done various guest races in everything from Ginettas to Mini Coopers. He has completed two Silverstone 24 hours including a fantastic result with Mazda in 2011 and has also competed in the Nürburgring 24 hour race back in 2008. Sadly work (and lack of money!) has got in the way of his talent and means that he doesn’t get to race as much as he would like but he is really looking forward to getting back behind the wheel for the unique Birkett 6-hour Relay Race.

James Batchelor, 24 from Hambledon, Hampshire, editor of Car Dealer Magazine. In contrast to the other team members, James is a complete novice. He acquired his racing licence this year and the Birkett Six Hour Relay is his first proper race. It’s fair to say the mention of this to his team mates has struck fear in their minds, not to mention in his. Aside from foolishly entering races with no experience, James is editor of Car Dealer Magazine – the UK’s most read motor trade publication – and is a seasoned actor in his down time.

Jade Paveley, age 20, originally from Meriden, now living in North Wales.  In between full time work as Dealership Host at the family owned Mazda Service Llandudno and North Wales Honda, Jade packs in track days, sprints and more recently stage rallying.  Having recently competed in the Mazda Karting Challenge and assisted on Mazda Partner Days, Jade is no stranger to the Mazda family having competed in the Silverstone 24 hour race for the team the same week that she passed her driving test.  From a karting background, progressing through to the incredible Gearbox karts, Jade classes one of her career highlights as a run up the hill at Goodwood Festival of Speed in 2012 in a MX5 GT production car.  Jade is an active member of Women in Motorsport for the MSA and in her rare spare time tries to keep fit and go shopping!