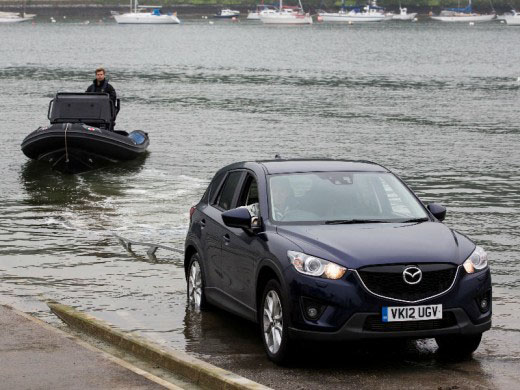 The Powerboat and RIB Round Ireland Challenge 2013 is one of the most arduous offshore boating events in the UK and Ireland – a gruelling 10 day, 1,000 mile voyage around Ireland through some of the roughest conditions the Atlantic ocean has to offer. Mazda is supporting the Linley Swan GP race team – and providing a rugged and versatile CX-5 sports utility vehicle to act as land support.

We offered followers of the Mazda UK Facebook http://www.facebook.com/MazdaUK page a chance to take part in this incredible challenge by doing a one-day, 120-mile leg of the competition in the Linley Swan GP boat with skipper Tom Montgomery-Swan. Anthony Drake from Penarth in South Wales was the lucky winner. Mazdasocial caught up with him a couple of days after his stint in the boat – and he was still buzzing with excitement.

Mazdasocial: What made you want to take part in the Powerboat and RIB Round Ireland Challenge 2013?

Anthony: “I love things that challenge me – and this really did defy convention: 120 miles, off-shore, rough conditions, in a custom built boat. It just sounded amazing.”

Mazdasocial: What sort of training did you have to have?

Anthony: “On the training day I went and had a look round the boat and we went through safety procedures. I was a passenger – Tom was going to be doing the driving, obviously, so there wasn’t too much I needed to learn. We did go through what I’d have to do if he went overboard – luckily that didn’t happen though!”

Mazdasocial: How were you feeling in the build up to the big day?

Anthony: “I was just massively excited, I couldn’t wait to get going. I actually got there the day before, as it was an early start on the day. I met up with Tom that evening and when I saw him and the boat it really hit home that it was happening.”

Mazdasocial: Were you nervous at all when you finally got going?

Anthony: “No I just absolutely loved it, it was great fun. We headed off at around 25 knots (29mph) – so not slow but not anywhere near as fast as the boat could go. We had to be careful with speed because we only had just enough fuel to make it. I think the capacity was about 140 litres of fuel – and when we got in at the end of the day we were running on fumes.”

Mazdasocial: Were there any scary moments?

Anthony: “A couple of hours in I started to notice it was getting choppy and the waves kept getting bigger. We’d hit the crest of the waves fast enough that the boat would take off and you could hear the propeller roaring and then you’d smash back on to the water again. We had to slow down because if you went over a wave too fast you’d smash straight into the next one and capsize. I wouldn’t say I was scared because I trusted Tom but … yeah … it was really exciting.”

Mazdasocial: What kind of challenges did you face during the day?

Anthony: “One of the things Tom had me do was untie the ropes that we used to tie the boat up to the buoy at lunch. Doing that is fine when you’re moored up but when you’re out at sea it’s a different story. When you’re on the move the rope is basically under the boat, so I had to lean right over with the spray in my face, the boat smacking into the sea, trying to grab the rope and untie it. I’m really glad I got a chance to do that.”

Mazdasocial: What did you think of the Linley Swan GP boat?

Anthony: “The boat was awesome. Because it was custom built for speed there’s just nothing weighing it down. It’s just an incredible machine.”

Mazdasocial: And how did you feel at the finish?

Anthony: “When we got back I was completely knackered. Crashing over those waves really does take it out of you and once the adrenalin and excitement had worn off I was exhausted. But I was so happy to have taken part – it was absolutely amazing and I’ll never forget it.”