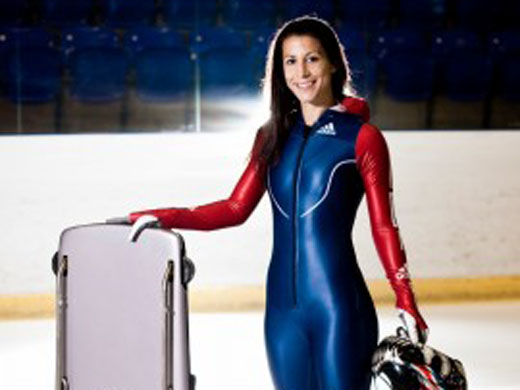 Wiltshire born Shelley, age 32, shot to fame at the 2006 Winter Olympic Games in Turin, Italy by winning the Silver medal for Great Britain in the Skeleton bobsleigh event. The medal was the first and only medal to be won by a GBR athlete at the Games.

Shelley took up the skeleton in 2002 and by 2003 purchased her first sled from Bromley. The 2004/5 season was when Shelley made her debut into the World Cup stage. The same season she won the World student Games and was the first female British Skeleton slider to win a Europa Cup.

Her breakthrough season was in 2005/6 where she came 2nd in the European Champs, finished 5th overall in the World Cup and won the silver medal at the Turin Olympic Games.

The following year her now fiancé and fellow Team GB slider Kristian Bromley relocated to Sheffield and after a slow start to her season went to Lillehammer for GBR selection and broke the track record but also aggravated two injuries that subsequently led to the end of the season for Shelley and her return to the UK following the World Champs in St. Moritz. She then had to undergo surgery to her knee.

Shelley and Kristan’s daughter Ella-Marie was born in October 2007  after which it was back to business and a return to the track in North America for 2 x American Cup races where Shelley was ranked 3rd and 1st.

Ella now travels wherever possible with her parents and is frequently spied playing in the snow at events!

Shelley was honoured to be selected to lead the British team into the stadium for the 2010 Vancouver Olympics. The races themselves didn’t go to plan for Shelley although once she got used to the track her times got quicker and quicker it wasn’t enough to walk away with a medal.

Shelley is now more determined than ever to continue working and training hard and competing at the top level.

The 2011/2012 World Cup tour was a real success for Shelley as she achieved a career goal in becoming the Overall World Cup Champion.

2013 saw Shelley Rudman rise to the big occasion once again as she was crowned world skeleton champion in St Moritz after blitzing her big-name rivals by more than half a second.

It was an emphatic performance by Shelley, whose win made her the first British woman to claim a sliding world title, and the first Briton since her partner Kristan Bromley won the men’s title in 2008.

Shelley’s sights are now firmly set on her 3rd Winter Olympics in Sochi in 2014.

Shelley took part in the TV series Superstars and with her team mates, Steve Redgrave, Alain Baxter and Lee Sharpe and went onto win the competition.

Outside of training and competing Shelley is doing consultancy for a number of sports organisations, public and motivational speaking.