Mazda MX-5 named ‘most reliable new sportscar’ by Which?

Mazda MX-5 named as ‘Britain’s most reliable new sportscar’ in Which? Car Survey 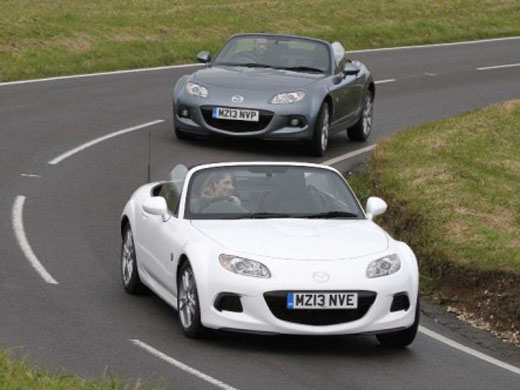 The Mazda MX-5 has been named as ‘Britain’s most reliable new sportscar’ in the 2013 Which? Car Survey – the biggest survey of car satisfaction and reliability conducted in the UK.

Achieving a reliability score of 97.4 percent (for models up to three years old) and 91.1 percent (models over three years old) the Mazda MX-5 beat a host of rivals to claim first and second places in the age-related categories – while earning high praise from the Which? editorial team.

“For a sportscar that will last for years and won’t cost a fortune in repairs, head to your local Mazda garage.  The MX-5 has the lowest number of faults and no annual repair costs in the first three years,” states Which?

For MX-5 models between 1998-2005 the magazine comments: “The Mazda MX-5 is the automotive equivalent of a double espresso.  Near-telepathic steering and handling make other cars (even some sportscars) feel woolly and dull by comparison.  You can pick-up a decent used MX-5 for just £1,500.  We suggest you do.”

Demonstrating the excellent reliability for which the Mazda brand is famed, other Mazda models also scored well in the Which? survey.  Mazda3 was rated as 91.9 percent reliable and topped the table for medium cars (over three years old), generating the comment: “The Mazda3 costs owners less in annual repair bills than the majority of new cars that are still within their three-year warranty period.”

The Mazda6 Estate placed second in the Estate cars (up to three years old) category scoring 97.2 percent, while the Mazda2 ranked fifth among Superminis with a 96.4 percent score.

Overall, the Mazda brand was ranked by the Which? team as equal-ninth out of 31 alongside Volkswagen in its Best Car Brands section, which merges the staff’s road-test opinions with the Car Survey results. The magazine stated: “It looks like you can’t go wrong if you buy a new Mazda.”

Jeremy Thomson, Mazda UK managing director, commented: “The 2013 Which? Car Survey findings are a wonderful endorsement of our products and our brand.  I’m sure that our all-new Mazda6 and Mazda CX-5 compact SUV with their innovative SKYACTIV technology will claim top rankings in future Which? surveys.  Meanwhile the iconic MX-5 is still winning friends more than two decades after its introduction, recently being nominated as ‘Best Convertible‘ by Carsite.co.uk and earning the title ‘Most Popular Roadster‘ in the Honest John Awards earlier this year.“

Compiled annually, the 2013 Which? Car Survey was based on information supplied by more than 47,000 drivers relating to over 57,000 cars.