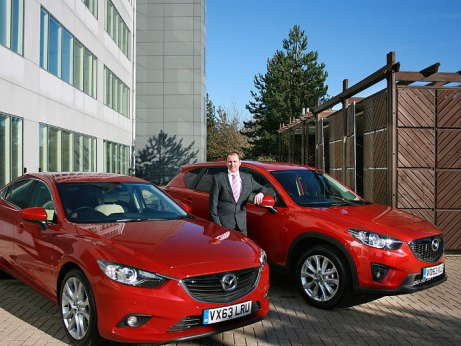 Mazda has seen fleet sales accelerate a massive 84 percent in the first nine months (April to December) of its 2013/14 financial year against a total fleet car market up just seven percent during that period, according to Society of Motor Manufacturers and Traders’ (SMMT) data. Sales are expected to soar even further in 2014 following the recently launched all-new Mazda3.

The Mazda6 featuring breakthrough SKYACTIV technology went on sale early in 2013 and corporate demand for the award-winning model has been huge with April-December 2013 registrations more than double those of 12 months previously.

Meanwhile, the all-new Mazda3, the third model in the Mazda range to feature SKYACTIV technology, went on UK sale this month (January 3, 2014) and Mazda’s network of 137 dealers are confident the model will further increase corporate demand.

The critical role that fleet sales are playing in boosting Mazda registrations – retail demand was up 18 percent April to December 2013 in a total market up 12 percent, according to SMMT figures – is being led by the brand’s six-strong Fleet Specialist Dealer (FSD) Network.

Holdcroft Mazda in Stoke-on-Trent was appointed an FSD early in 2013 and initially experienced a three-month trebling of fleet sales. Since then fleet demand has increased by up to 15 percent quarter-by-quarter.

Group fleet sales director Malcolm Pearson said: “Following an initial surge in business we have experienced steady growth. Initial fleet success has been with Mazda6 and CX-5 and we anticipate that the launch of all-new Mazda3 will deliver further growth. It was a good business decision to become a FSD.”

Holdcroft Mazda – the Holdcroft Motor Group was highly commended in the Supplier of the Year category in the 2013 Fleet News Awards – says fleet demand has been fuelled by the dealership targeting local business, which in turn have been receptive to buying Mazda’s key fleet models or opting for a leasing arrangement through Mazda Contract Hire.

Pearson said: “Competitive prices combined with SKYACTIV technology offering low CO2 emissions and excellent MPG along with cutting-edge design and styling has proved to be a winning combination for the businesses we have spoken to. Local companies have been pleased to talk to a local dealer selling good cars.”

The RRG Group, which operates Mazda franchises in Manchester, Rochdale and Stockport, also became a FSD in 2013 and has seen Mazda demand increase more than 40 percent year-on-year.

Group fleet general manager Andy Houston, who is based in Manchester, said: “Mazda6 and CX-5 have both been big players as we see rising demand from the local business community. We anticipate that demand to grow significantly in 2014 with the all-new Mazda3 now on sale.”

Houston said: “We are talking to businesses about models that are competitive in the market in terms of tax efficiency and whole life costs. Many local businesses only look at transaction price, but when we explain whole life costs and the tax position of Mazda models they understand the benefits available. Much of our role is about delivering advice.”

He added: “The arrival of the all-new Mazda3 brings exciting times. It is a great car with competitive pricing and contract hire rates, the build quality is fantastic and the drive is excellent. It is, I believe, the car that local fleets want.”

The all-new Mazda3 will be available in two body styles – Hatchback and Fastback (saloon) – with both sharing the longest wheelbase of any car in the C-segment.

The key fleet ingredients of low CO2 emissions and excellent mpg from a model displaying sporty looks and with sharp pricing starting at start at £16,695 for the 1.5-litre SKYACTIV-G hatchback 100ps SE and £19,245 for the emissions-busting 2.2-litre SKYACTIV-D  (104g/km) Fastback 150ps SE, are expected to secure fleet manager and company car driver demand.

Mazda Head of Fleet Steve Tomlinson said: “The introduction of SKYACTIV technology has delivered a fleet renaissance for Mazda.”

“The Mazda6 has become the car of choice in the fleet sector and we anticipate demand to further increase given the autumn introduction of a 2.2-litre SKYACTIV-D 150ps engine with emissions of just 104g/km. This pushes the model down a tax band thus delivering greater financial savings to businesses and drivers alike alongside improved fuel economy.”

“Corporate sales of the Mazda6 are being well supported by demand for the Mazda CX-5 and with the all-new Mazda3 set to deliver volume in the important lower medium segment, 2014 will be an exciting year for Mazda in fleet.”