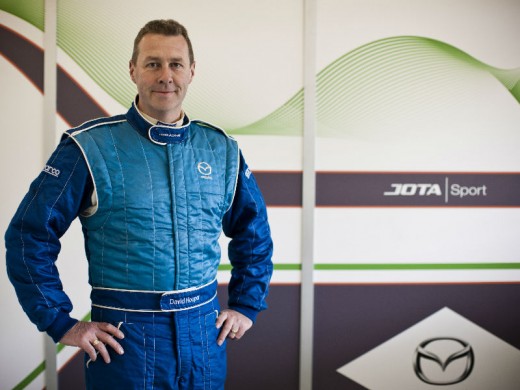 A COOL but thankfully dry day welcomed the Mazda UK race team to the circuit which markets itself proudly as the Home of British Motorsport.

After what seemed like an endless drive around the perimeter of the Silverstone track, I finally arrived at the new and hugely impressive Wing paddock complex.

After a quick hello to the team I ventured into the garages to see the cars for the first time and I have to confess to being a little awe-struck by the sheer scale and cleanliness of the facilities. This fantastic new complex makes the other pit-lane garages I’ve seen look like back-street lock-ups – the sort of places where Del Boy would keep his Ford Capri Ghia!

Richard Aucock, the other journo on the team, was first out on track after signing on for the 45-minute session.

Mixing with seasoned racers in some scarily expensive machinery is quite daunting for relatively inexperienced racers like Richard and I, especially when we are driving on a circuit neither of us have raced on before.

After the first few laps, the car was called in to have its tyre pressures checked. Everything was fine, and it was soon sent out again.

As Richard’s pace improved, his lap times came down, but he was still finding his way around Silverstone’s International circuit – and keeping out of the way of the faster cars – of which there were many.

He came in looking a bit hot, but happy with his first outing in the Mazda MX-5 race car, beautifully prepared by the JotaSport team, which has distinguished itself on the country’s race tracks in the last few years, and done an excellent marketing job for Mazda UK in the process.

Now it was my turn. In went the ear plugs for the radio, on went the Hans device to protect my neck in the event of a crash, and finally the helmet – and then the strapping in the car performance begins, making sure the racing harness sits over the Hans device, and is not on the shoulders. 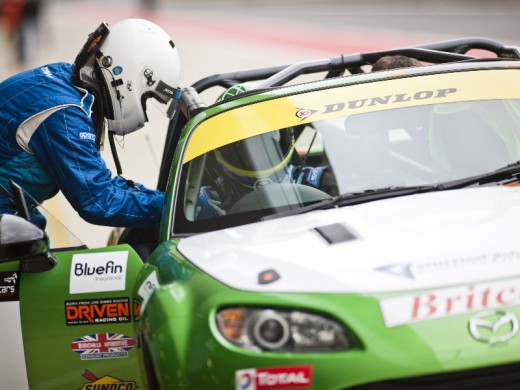 It took me a few laps to get the hang of the circuit, but I quickly settled into the car. The racing MX-5, as with the road cars, is easy to drive and confidence inspiring, and if you do overstep the mark, by carrying too much speed into a corner, or accelerating too hard out of one, prompting a bit of oversteer, it is always pliable and relatively easy to control.

For drivers like me who don’t race very often, one of the biggest challenges is getting used to the extra grip slick tyres provide – and the extra speed you can carry through corners. I know from my recent test at Donington Circuit, one of my favourites in the UK, what a difference it makes having driven the race car, and the GT Concept car developed by JotaSport, back-to-back.

As I unlocked the secrets of the International Circuit my lap times got quicker and quicker, but the 45-minute session seemed to fly.

The Britcar field is an eclectic mix of machinery, mostly saloon cars in the shape of BMWs, Hondas, and a smattering of MX-5s run by other teams, but this time out we also have a couple of Porsche Boxsters and even a Mini to contend with, all of which boast many more braked horses than the 160 our little MX-5s can muster.

Some of the other stuff on the track looks fantastic – an old Ford Mustang, and a white Aston Martin which was so quick it appeared behind me from nowhere!

Unfortunately, my test session was cut short after a BMW M3 ran wide out of the fast, sweeping Stowe corner, went onto the damp astro turf at the side of the circuit and barrelled into the wall on the inside of the circuit, scattering debris all over the track.

The marshalls’ yellow flags quickly became red and the session was stopped as everyone filed back into the pit lane. The M3 joined a Porsche 911 which came a cropper earlier in the day before being unceremoniously brought back to its pit garage on the back of a low loader! It’s a sobering reminder of just what we’re doing out there as both cars will take no further part in the weekend’s proceedings. The BMW was clearly beyond repair.

Our last test session of the day was a short one – just three laps each, to put a heat cycle through a brand new set of slick tyres for each car to use tomorrow.

All we need now is for the weather to be kind to us on race day – and it doesn’t look like it’s going to be – and our MX-5s are open to the elements!

Perhaps more disturbing, are the set of grooved “wet” tyres lurking in the corner of the pit garage. Just in case!