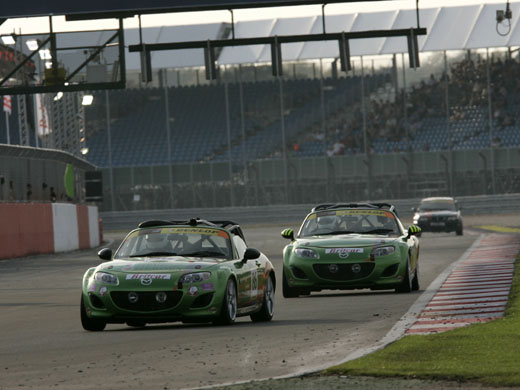 This Saturday, 11 May, sees Mazda’s MX-5 return to the track in the Britcar Production Sportscar Series at Silverstone.

This is the fifth time Mazda UK has entered Britcar.  The last time was in 2011 when the MX-5 production race car secured three podium finishes, placing the car fourth in class and seventh overall for the season.  Now the team is back and hungry for more.

This year Mazda UK has entered two cars, each car will be driven by an experienced Mazda works drivers partnered up with a talented racing enthusiast. The cars will be raced around Silverstone’s nine-corner, 1.85-mile long International Circuit in the two 45-minute races.

So lets meet the drivers:

Mark Ticehurst, aged 42 from Hassocks, West Sussex. Mark is married with two children and has lived and breathed motor sport since he was old enough to prop himself up in a kart. Mark spent the first ten years of his career honing his skills in 100cc Karts where he recorded numerous victories and championships. In 1995 he recorded his first major victory in the Alfa Romeo Championship where he finished the season at the top of the leaderboard following 12 victories and five second places. He successfully defended his title in 1996, while in the meantime earning two victories in three races in the Caterham K Championship.

Following that he took part in the Vauxhall Vectra Sri V6 Challenge and landed a works Vauxhall Drive in 1999 for Triple Eight Race Engineering, becoming the first ever driver to win a race in an LPG fuelled race car, securing four wins and the Championship. He has also competed in the MGF Cup and Porsche Open Championships.

In 2005 he landed his first role at Mazda where he drove a Mazda RX-8 in the S1 Production Endurance Racing Series and collected five class wins and three class seconds. He also competed in the 24hr Silverstone Britcar race.

Following various other Mazda testing roles he then drove an MX-5 in both the Britcar 4hr Snetterton Endurance Race and Britcar 24 Hour Silverstone race both in 2010.

Over the following two years, Mazda evolved its MX-5 into a GT4 car and last year it competed in the 2012 British GT series. The car was piloted by Mark along with teammate Owen Mildenhall and had a hugely successful first year campaign, with the duo managing to finish fourth overall in class with a couple of podium finishes along the way.

As the Britcar Production event on Saturday is such a short race, Mark believes the key to a strong finish lies in the pit stops and also thinks it is essential to manage the traffic as effectively as possible, making sure to always be decisive and pass cars at the first available opportunity. “Without any fuel stops or tyre changes it is effectively two twenty minute sprints” commented Mark, he went on to say “the most important thing this weekend is that the two motoring journalists get to experience and enjoy the thrill of competing on the edge.” Mark is also very excited about experiencing the new pitlane at Silverstone for the first time.

“Mazda have put a huge amount of time and effort into the race and the primary objective is to get the car round, give everyone a great day out and hopefully, if we stick to our race plan who knows we could have a good result.”

When Mark is not racing he enjoys snowboarding and wakeboarding.

Owen Mildenhall, aged 40 from Bexleyheath, is a motoring journalist and racing driver. His current job is senior road tester for Auto Express weekly car magazine, where he has worked for ten years. Apart from producing huge amounts of copy to tight deadlines, Owen also tests virtually every new car that is manufactured.

Before picking up a pen, Owen had an impressive career as a racing driver and still does his best to drive competitively whenever he gets the chance.

His first taste of motorsport came back in 1993 at the Jim Russell Racing Drivers School. From there he moved onto the British Formula First Series. This was followed by stints racing in British Formula Ford, where he was the First Division Champion in 1997 and the FIA Sportscar World Series in which he drove the Pilbeam-Nissan SR2, setting the lap record at Magny Cours. Owen has also raced in the Porsche Carrera Cup and one of his career highlights was taking part in the 2010 24 Hours of Nurburgring where he co-piloted the Lexus IS-F, eventually finishing in 59th place overall and a very impressive 4th in class.

His partnership with Mazda first came about back in 2005, when he was asked to take part in two Silverstone 24 Hour races driving the Mazda RX-8. Since then Owen has also been involved with developing the MX-5 GT4 racecar right from its birth, culminating in contesting the 2012 British GT series alongside Mark Ticehurst. The partnership was a hugely successful one, especially considering it was the pair’s first season with two podiums and  fourth overall in their in class.

Owen said that he loves racing for Mazda because there is so much enthusiasm for racing within the company.

Ahead of this weekend’s race, Owen stresses that his main tactics are to enjoy it and highlight the strengths and reliability of the road going MX-5 by racing this very lightly modified racer.

Compared to his experience with the GT4 programme last year, this time around it will be a very different story, “that was a bespoke racing car whereas the production car is really just a standard road MX-5 with slightly stiffer suspension, upgraded brakes and safety kit. But these cars are incredible, they’ve done two 24 hour races with no reliability issues, which highlights the strength of the standard gearbox and engine.”

“The race is also a great opportunity for a pair of journalists to sample the MX-5 in a race. Mark and I are only really there to help those guys get up to speed,” explained Owen.

When he isn’t travelling around the world testing cars, writing in-depth features or racing, Owen enjoys cycling, learning about history and if he could afford it, classic cars!

Richard Aucock, is a motoring journalist by trade and currently holds the position of Editorial Director at Motoring Research. An employee there since 2001, Richard started out as a Staff Writer and worked his way up the ladder. Richard describes Motoring Research as an editorial agency which supplies content to clients such as MSN Cars. As director his daily duties include overseeing day to day operations, keeping track of both the automotive and publishing industries, and also speaking with potential new clients. “Every day is, genuinely different.” Within that, of course, there’s ample driving of new cars, a part of the job he particularly loves. Regularly involved in both UK drives and foreign events the job has taken him to many parts of the world, testing new models.

Richard’s racing history is potted: his first competitive event was actually with Mazda back in 2005, entering the final Britcar race of the season at Snetterton. At this event, he also joined up with David Hooper, one of his co-drivers for this event! He’s also raced a Volkswagen Golf VW Beetle, and loves karting. One of his proudest moments was winning the Guild of Motoring Writers/Vauxhall Karting Championship back in 2001…

When he has time, Richard tries his best to keep fit: he likes running and cycling, and is trying to get back into swimming, although it’s not his favoured sport. He’s competed in several half marathons already this year and is also entering the Jenson Button Triathlon at Luton Hoo in June.

A fascination with the automotive industry means one of Richard’s favourite pastimes is reading about its history and technical developments, often he does it while listening to BBC Radio 6 Music. Unfortunately though it means he rarely has much time left to work on the old Mercedes in the garage.

Speaking about the race Richard commented, “My race tactics are simple: to finish. I have no doubt the car will be 100 percent reliable, meaning I am the variable. No heroics, particularly in the first race, because I need the miles under my belt.”

“The second race will be interesting as I’ve never done two races in one day. I’ll be two-thirds of the way to being a BTCC driver! I expect this one to be more intense but again am determined not to get carried away. Everyone wants to see the car finish…”

“I’m certainly both excited and nervous. I’ve no idea how I’ll perform until I actually test the car for the first time – I haven’t even seen it, yet alone driven it. This really ramps the pressure up but, for me, it’s all part of the race driver experience.”

David Hooper, aged 47 is married with one son and is a freelance motoring journalist and the editor of www.WheelWorldReviews.co.uk. A self-proclaimed life-long petrol head, David has always had a passion for cars and all things automotive. Before turning freelance he was the Regional Motoring Editor for Northcliffe Newspaper’s North East region, and was responsible for providing the weekly motoring content for several titles, including copy for features, special publications and supplements.

David got his first taste of competitive motor racing with Mazda back in 2005 when he raced an RX-8 in the Britcar Production Championship, as well as an excellent experience for all the drivers who took part, it also provided Mazda with the perfect opportunity to demonstrate the capabilities and reliability of the new rotary engine under race conditions.

Since then David has raced an MX-5 at Snetterton in the Britcar Championship and more recently he was lucky enough to take part in the International Ice Race in Sweden. The race saw identical MX-5′s fitted with studded rally-spec ice racing tyres, wuth the teams representing each of  the countries that make up Mazda’s European market, compete on a frozen lake in Sweden. The four-hour endurance race featured two cars from the UK and at the half-way stage the UK team was leading the field.

Speaking to Mazda UK, David said: “I’m very glad to be invited, and I’m equally excited to be racing at Silverstone for the first time.”

On the team’s chances this weekend David thinks that although the MX-5 might lack the power of its rivals, it’s agility, and light weight will help preserve its tyres and brakes and should mean that it will be competitive against more potent competition. The MX-5’s legendary reliability should play into Mazda UK’s hands.

When he’s not writing about cars, David is an avid follower of Formula 1 and loves mountain biking and fell walking. He loves classic cars of all shapes and sizes and is the proud owner of a 1969 Morris Minor Convertible, called Doris, which he has just taught his son to drive in.