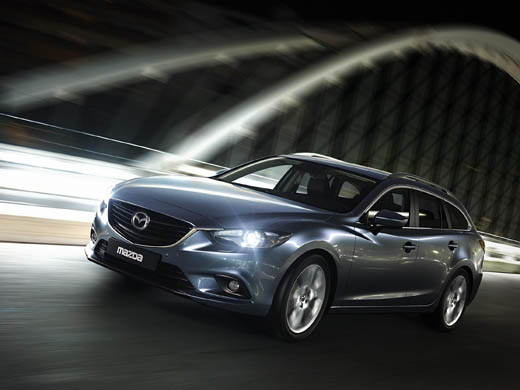 Built to feel like an extension of its driver, the all-new Mazda6 brings together the most advanced iteration yet of Mazda’s Sustainable Zoom-Zoom driving and electrifying ‘KODO – Soul of Motion’ styling. The combination of highly efficient SKYACTIV technology and the striking KODO design will ensure the Mazda6 is perfectly equipped to tackle the competitive CD-segment.

The all-new Mazda6 – now in its third generation – is the first mass-production Mazda model to be equipped with i-ELOOP, the Japanese company’s unique brake energy regeneration system. It’s the most recent ingredient to Mazda’s building block strategy for uncompromisingly efficient and fun-to-drive vehicles.

i-ELOOP joins the innovative ‘i-stop’ idle-stop system and SKYACTIV powertrains, chassis and body – first introduced on the Mazda CX-5 – and positions the new Mazda6 as the benchmark for fuel economy and CO2. With fuel economy as high as 68.9mpg* and emissions as low as 108g/km* – without any sacrifice in performance – the Mazda6 is the new class leader.

Together with SKYACTIV powertrains, the SKYACTIV-Chassis and SKYACTIV-Body make the new Mazda6 an engaging and rewarding drive, delivering refined, linear handling, segment-leading safety and a uniquely efficient and lightweight design.

Chassis and body structures are stiffer, benefiting from greater proportions of high and ultra-high tensile steels. The steering and suspension combine low-speed agility with high-speed stability and responsiveness to driver input – at a level of precision unparalleled in the CD-segment. In addition to being quieter and more aerodynamic, the new Mazda6 will also be a segment leader in terms of safety.

The SKYACTIV-Body offers class-leading impact protection thanks to highly rigid impact-absorbing structures and innovative load paths to disperse energy away from the cabin. To help the driver avoid accidents, the new Mazda6 features an impressive array of advanced active safety technologies. Even when a collision is unavoidable, passive safety technologies work to diminish its severity for occupants and pedestrians – and even the vehicle itself.

In the interior, form meets function in a highly ergonomic cockpit design designed to make driving as enjoyably and engaging as possible. Everything is exactly where it should be: even the repositioned A-pillars, moved rearwards relative to the current model, contribute to a stress-free experience by widening the driver’s field of view. Passengers will appreciate the relaxing atmosphere in the cabin, which features segment-leading space, accompanied by the latest infotainment technology, including an 11-speaker BOSE® surround sound audio system (available on Sport models only).