Mazda6 and Takeri – separated at birth 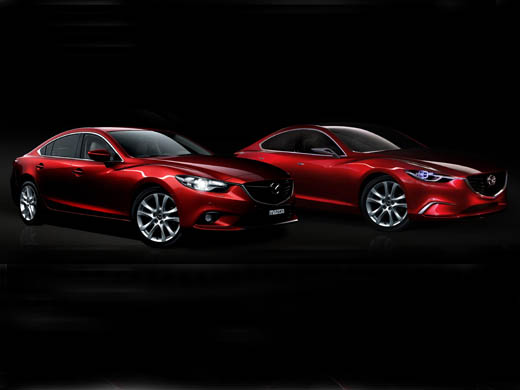 When the wraps came off the all-new Mazda6 at last month’s Moscow Motorshow, it’s design and style was incredibly well received, and much of this overwhelmingly positive response was due to its striking similarity to the Takeri design concept believes Peter Birtwhistle, Mazda’s European Chief Designer.

“With our ‘KODO – Soul of Motion’ design ethos, we are taking our concept cars and driving them off the show stand and onto the road,” says Birtwhistle. “You only have to look at our recent design studies to realise just how closely our production models mimics our concept cars.”

“Much like the CX-5 mirrored the proportions, stance and detailing of the Minagi concept car we unveiled at the 2011 Geneva Motorshow, so the Takeri was the unmistakable inspiration for the new Mazda6,” explains Birtwhistle. “If you view the two cars next to each other it is easy to see just how strongly one resembles the other.”

Of course, Mazda has a great history of creating some pretty wild concept vehicles that stretch the creativity of our designers and demonstrate our design power to the limit. But it’s also strategically important to show something closer to production as we roll out our KODO design message. Hence Minagi and Takeri.

These ‘teaser’ concepts are generally constructed well after the final production design has been signed off and are exceptionally valuable in gauging the response from both the media and the general public.

“While some manufacturers tend to heavily camouflage their teaser show cars – creating a coupé concept when in reality the production version will be a five-door hatch – we took the decision with Takeri to base it as closely as possible on the final production car,” continues Birtwhistle.

While Takeri is fractionally lower, longer and wider than the new Mazda6, its proportions and stance are almost exactly the same. So, like the Minagi and the CX-5 before it, the Takeri was incredibly close to new Mazda6.

“To use Takeri and its KODO design language to accurately portray how the Mazda6 would look was quite a radical decision by the design team,” admits Birtwhistle. “Some commentators believe that the new Mazda6 is not close enough to the Takeri – in hindsight, I believe it’s the other way round.”

Birtwhistle muses over the idea of the Takeri being too close in its design to the Mazda6. “Possibly, yes, but if we had taken the route of our competitors and created a coupé or convertible, we certainly wouldn’t have had anything to measure it by and learn from. When it comes to concept cars and design studies, you don’t have to stray too far the production version to run the risk of seriously diluting the public’s expectation when production car is finally revealed.”

“Place Takeri and the new Mazda6 alongside each other and Birtwhistle believes that the most observers would be hard pressed to tell one from the other. “You have to look twice – and when you see the new Mazda6 on the road outside in its natural environment street scene, the similarity is even more pronounced with its dramatic proportions, muscular stance and tactile detailing.”

A key factor behind the svelte lines of the new Mazda6 is the lower angled positioning of its SKYACTIV engines, an arrangement that allows the designers to dramatically rake back the car’s windscreen to create a cabin position very similar to those of a rear-wheel drive car.

“This car sits beautifully on the road,” says Birtwhistle. “It’s low, curvaceous and cleanly detailed. It looks just like a concept car let loose on the motorway. Which is really what it is.”