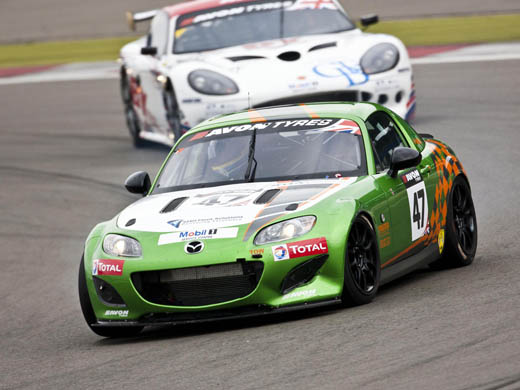 Mazda UK announced today that Total, one of the largest integrated oil and gas companies in the world, is one of the official sponsors of the 2012 Mazda MX-5 GT race programme.

Linden Thornton, Marketing Manager for Total Lubricants said: “With the MX-5 GT race car doing so well in last year’s Championship and an attractive sponsorship proposition, it is an exciting time to support Mazda UK both on and off the race track. It is a fun, challenger brand which we are looking forward to working with to leverage business initiatives in the dealer network through the race programme.”

Jeremy Thomson, Managing Director, Mazda UK added: “I am delighted that Total Lubricants have chosen to support our Mazda MX-5 race programme as it is an important element to building Mazda’s profile as a challenger brand. Last year was a developmental year where we demonstrated the strengths of the MX-5’s nimble handling and performance. We are looking forward to our first year in the British GT Championship and I am confident that Total Lubricants will be able to capitalise on its success.”

Following a development year in 2011, the Jota-prepared Mazda MX-5 GT ran a successful campaign in the Britcar Production GTN Championship, finishing fifth overall and fending off challenges from the more powerful Porsches, Ferraris and Lotus.

True to the Mazda brands promise to ‘defy convention’, the MX-5 GT race car will take on the challenge of competing in the prestigious Avon Tyres British GT Championship against supercars in the GT4 class, including Aston Martin, Ginetta and Nissan.

For the third consecutive year, the line-up for the MX-5 GT race car is regular drivers Mark Ticehurst from Hassocks, West Sussex and motoring journalist and racing driver, Owen Mildenhall from Dartford, Kent.

The ten-race British GT Championship runs until October 2012 and is set over seven weekends at seven different circuits.