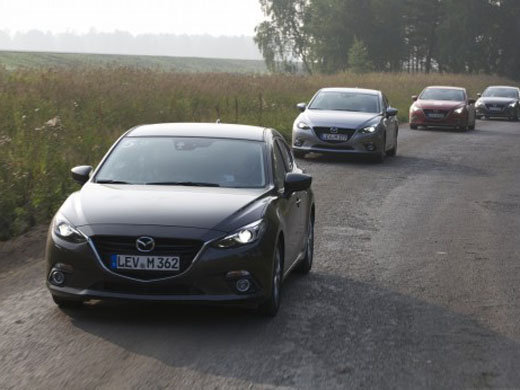 The all-new Mazda3 hatchbacks taking part in the ‘Mazda Route3 – Hiroshima to Frankfurt Challenger Tour 2013’ have successfully covered the first 3,300 miles of the route, arriving yesterday in the central Siberian city of Krasnoyarsk safe and sound.  The convoy of eight cars has now completed the first three overland stages of the 9,300 mile expedition right on schedule despite often treacherous roads.  The new hatchbacks are holding up superbly, as a service check by the local Mazda dealer confirmed.

British media and Mazda dealers from the UK were among the first crews to drive the Mazda3 test fleet when they participated in the first three legs of the epic tour from Vladivostok to Krasnoyars, via Blagoveshensk and Ulan-Ude.

Leg one, which started in Vladivostok, Russia’s main Pacific port, on 3 August, ran parallel to the Chinese border and had a definite East Asian flavour.  One of the big highlights was crossing the famous Amur River bridge in Khabarovsk, the 2.4 mile long marvel of engineering pictured on Russia’s 5,000 rouble note.  The stage ended with the Mazda3s driving into Blagoveshchensk.

Leg two, which welcomed a whole new group of drivers, followed the course of the Trans-Siberian Railway.  The 1,430 mile drive included a side trip to the Ivolginsky Datsan, Russia’s most important Buddhist temple and monastery.  It also featured the tour’s longest single day – more than 560 miles – and a spectacular variety of scenery, plus giant potholes and crumbling pieces of road.

The main highlight of stage three was undoubtedly Lake Baikal, where the newest participants were treated to a boat trip on the world’s deepest, most voluminous freshwater lake.  After a stopover in the shore-side town of Listvyanka, drivers were soon back on the road under the big sky, arriving yesterday via Irkutsk in Krasnoyarsk, the final destination of the 1,000 mile leg.

The Krasnoyarsk Mazda dealer inspected the Mazda Route3 cars, paying special attention to the suspension, underbody, air filters and other components exposed to unusual levels of abuse.  No problems were evident, and the new Mazda3s have heroically handled everything Siberia could throw at them.  This was good news as the next service check is not until Moscow – another 4,350 miles westwards over a route that includes dangerous mountainous stretches and long segments of loose-surfaced gravel roads.

Mazda fans can follow the convoy’s progress on a dedicated website at www.mazda.co.uk/mazdaroute3, which features a trip diary with images and videos or via Twitter at #mazdaroute3. Tomorrow stage four of journey continues.

All the Mazda3 hatchback test cars are powered by a 120ps SKYACTIV-G petrol engine mated to a six-speed SKYACTIV-MT manual transmission.  From the stunning ‘KODO – Soul of Motion’ exterior design to the advanced lightweight SKYACTIV technology and a completely redesigned cabin space, the convention-defying Mazda3 is built to exceed customer expectations.