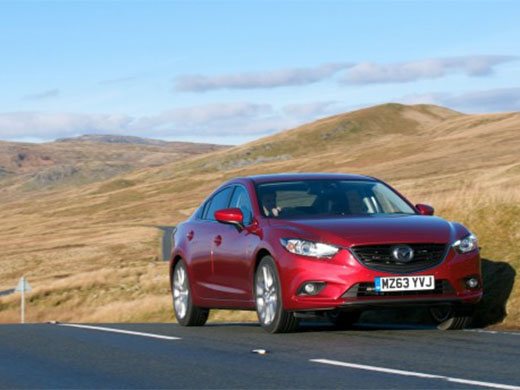 Mazda’s ground-breaking executive express, the award-winning new Mazda6, is now even more attractive thanks to improved fuel economy and lower CO2  emissions making it one of the most frugal yet fun to drive cars in its class.

Emissions on the 2.2-litre SKYACTIV diesel saloon models with its powerful 150ps four-cylinder engine and manual gearbox have been lowered by four per cent from 108g/km to 104g/km with a corresponding improvement in fuel economy taking the combined cycle figure from 67.3mpg to 72.4mpg.

For the new Mazda6 Tourer with the same powertrain, emissions are reduced by five per cent to 110g/km from 116g/km and economy improves from 64.2mpg to 67.3mpg, moving it from band C to the lower band B for road fund licence purposes.

The improvements have been made without sacrificing Mazda’s renowned fun-to-drive characteristics meaning buyers don’t have to downsize to a smaller engine to get the economy they want.

The changes also strengthen new Mazda6’s credentials as the true no compromise car for motorists looking for the perfect blend of performance, economy and safety wrapped up in a highly competitive package.

“The improvements to emissions and economy open clear water between us and the sector’s best seller the BMW 320d and when linked with our outstanding finance offers make the new Mazda6 a very competitive choice for our retail customers,” said Mazda UK Sales Director Peter Allibon.

The improvements – the result of production modifications – also reinforce new Mazda6’s award-winning credentials. Since its launch in January, it has won numerous awards including ‘Best Large Family Car’ (saloon) and ‘Best Estate Car’ (tourer) from the influential website CarBuyer, which is linked to the weekly Auto Express magazine, as well ‘Best Family Car’ in the Auto Express New Car awards and most recently the ‘Eco Car Award’ at the Scottish Car of the Year awards.

It is also one of the safest cars on Britain’s roads after receiving a 5-Star safety rating in the latest Euro NCAP tests, the highest rating possible, announced in September. The result endorses Mazda’s strategy of enhancing the safety of all its new vehicles by introducing such innovations as the impact-absorbing SKYACTIV-Body technology.

New Mazda6 buyers are offered a choice of 36 saloon and tourer models with three equipment levels (SE, SE-L and Sport – with or without Satellite Navigation) and four high-efficiency SKYACTIV diesel and petrol powertrains.  Prices range from £19,595 to £28,295 (on-the-road).