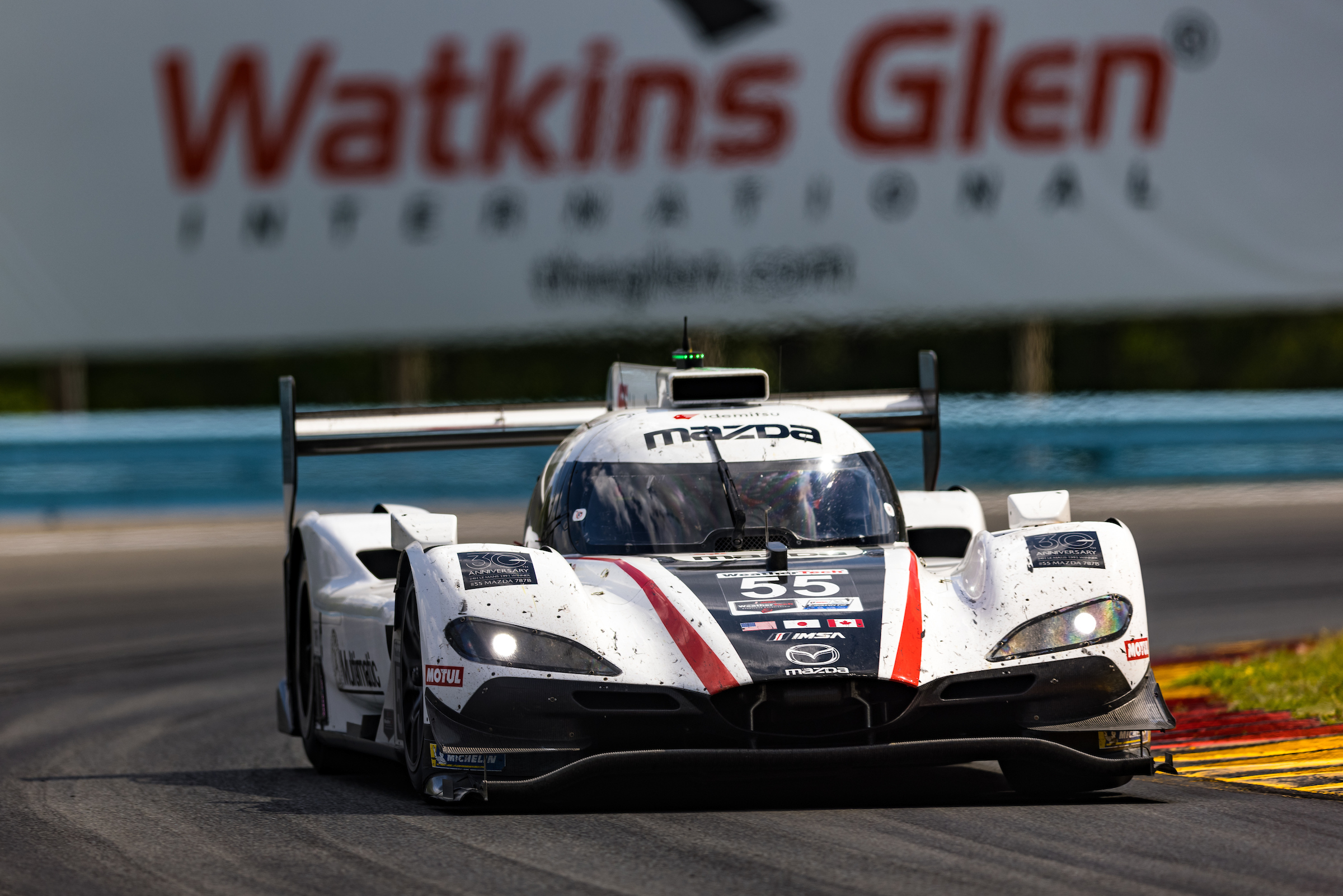 Last Sunday the Mutlimatic Inc run Mazda RT24-P won the 2021 Sahlen’s 6 Hours of the Glen with a combination of outstanding team work and inspired driving. Harry Tincknell crossed the line just under a second ahead of a hard charging Olivier Pla in the MSR Acura to take the first win of the 2021 season for Mazda Motorsports and the second consecutive victory for Mazda at Watkins Glen – the scene of the RT24-P’s breakthrough race in 2019.

This victory also fell on the week Mazda celebrated the 30th anniversary of its 24 Hours of Le Mans win in 1991, with the Mazda 787B.

The race was a battle fought on and off the track, which required every single member of the team to bring their A game – from Tincknell and his team mates, Oliver Jarvis and Jonathan Bomarito, to the technicians who prepared the car and performed flawless pit stops, and the strategists and engineers who crunched the numbers and made it all work in the last hour.

The six-hour race got off to a stuttered start when a Full Course Yellow was thrown after just a few minutes of running. When the race finally went green Jarvis cleared the number 5 Cadillac that had initially held him up with a decisive move in traffic and set off after the pack. The team then settled into a good rhythm, consecutively knocking off the competition during the pit stop cycles, first the number 48 Cadillac while Jarvis was at the wheel, followed by the number 31 Cadillac of Pipo Derani during Tincknell’s first stints in the car, augmented by a strong pass by the Englishman on Kevin Magnussen’s Cadillac in head to head racing.

Bomarito followed, taking over in second place after another impeccable effort by the Multimatic crew in the pit lane. He spent the first of his two strong stints chasing down the leading Acura of his old teammate Olivier Pla before the effort was spoiled by another caution just before the three hour mark, when all the teams chasing the half distance Endurance Cup points short filled and shuffled the Mazda back in the pack.With half the race still remaining the fightback was on. Jarvis took the wheel at the next stop, the Mazda once again jumping the number 31 Cadillac with a superior pit stop.By the time Tincknell climbed aboard, with two stints to go, the RT24-P was running third after two excellent stints by Jarvis and another fast stop by the pit crew.

With just under an hour of the race remaining, Tincknell found himself chasing Magnussen for second place with Pla over 15 seconds up the road in the lead. And then, in an almost identical situation to Mid-Ohio earlier in the year, a major crash caused a Full Course Yellow only seven laps into the penultimate stint, some seven laps shy of being able to make the finish on a full fuel fill. It was going to be all about the fuel economy once again, but this time Multimatic Motorsports was intent on controlling the race from the front, the only way of being able to take the win. An inspired call by race engineer Leena Gade to eschew taking tyres, other than a single front right for safety, allowed the extremely short fuel fill to be the only stop time limitation. Other competitors took left side tyres which although fast still took longer than the fuel and so as the pit lane filled with accelerating DPi cars, the Mazda led the field back out on to the course followed closely by the rest of the field. First objective fully accomplished.

With the cars circulating under yellow the number crunching started, balancing the fuel remaining in the tank and real time consumption against the time remaining, or more importantly the laps left in the race.Initial results appeared dire but as the yellow stayed out, while the safety teams cleaned up the track, and the race clock ticked down, the chances of making it to the end increased. With 37 minutes to go the race went green and Tincknell embarked on the fuel-saving drive of his life. Luckily the main protagonists were all in the same boat but the Mazda controlled the pace, from both fuel consumption and the number of laps left in the race perspectives. As the race entered its last two laps, Pla started to pick-up the pace, having apparently “banked” some fuel, but the Mazda team had done likewise and with a final look at the calculations Leena went on the radio and told Harry to pick it up just enough, while controlling the timing of the white flag, and then go flat out on the last lap to keep Pla behind and take the win! The Mazda fan out of fuel on the cool-off lap, proving that the maths had been right on the money.

This result means that Tincknell and Jarvis are closing in on the leaders in the drivers’ championship, while Mazda Motorsports is doing the same in the teams’ standings.  They don’t have long to wait for the next opportunity to score points as the next race, the WeatherTech 240, takes place at Watkins Glen this Friday (2 July).

It’s an amazing feeling to win here, not least because it’s one of my favourite tracks. We’re in the championship hunt and we’ve said all along that we need to take consistent podiums but we also want the wins. To do it in this fashion where we didn’t have the quickest car – we made some big changes as we went through the sessions and found the direction for the race and that really shows the strength of this team. We had to work harder this weekend than we ever have before to get a chance of the win. To get it the team had to execute perfectly and the drivers couldn’t afford any mistakes. This is a very special win. It’s my first in the number 55 and a nice point in the championship to take a win like this.”